Film Review: Get On Up 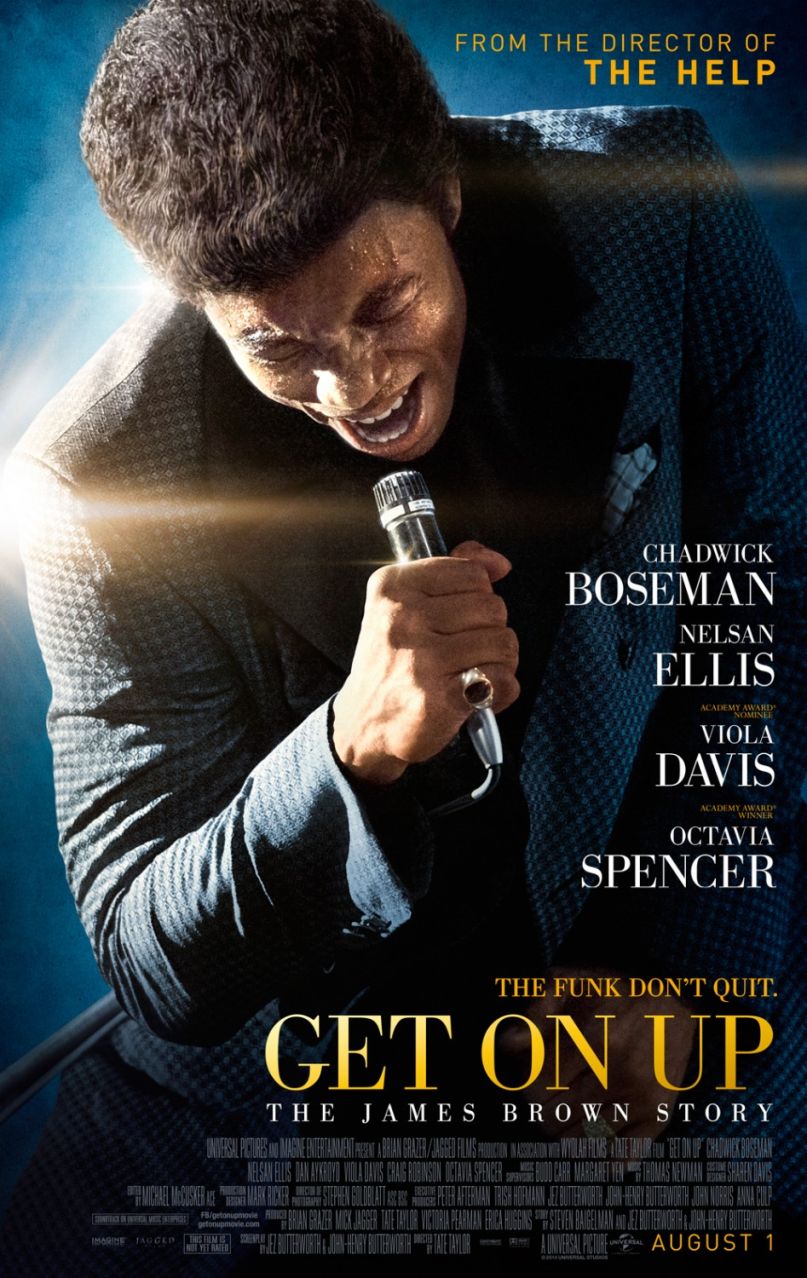 In Get On Up, James Brown will occasionally look at the camera and declare that he likes to “flip it.” Not to be a square, but these instances keep begging the question – what are you flipping, Mr. Brown? The tone and timbre of scenes in your movie? How your life’s plot is shaping up? The sound of popular music over the last 50 years based on your wild contributions? The answer, for the most part, is an often emphatic and very funky yes. It’s such a broad, generalized statement that you can’t help but heckle the hardest-working man in show business over it. How much flipping are we talking about? Get On Up is all over the place, flipping it, turning it, going 360 degrees with it again and again. It’s the film’s most interesting and unfortunate aspect, but like the soul sensation himself, it begs attention.

Tate Taylor’s follow-up to The Help is a more ambitious, stylish, and thoroughly racial ride than his wimpy predecessor. What it lacks in old-fashioned story-telling and simple sap, it more than compensates for in an amorphous plot with whiz-bang staging, superstar attitude, and a show-stopping lead performance.

Chadwick Boseman (Jackie Robinson in 42, now playing a much more personality-driven historical figure) gets into the groove as James Brown. He walks, talks, shouts, screams, begs, pleads, pleases, and powers up as the Godfather of Soul. Complete with shifting hair-dos, high and sharp vocals, and one bad under-bite, this is an electric depiction and a breakout for Boseman, that’s both immersive and attention-grabbing, even if it slips back and forth from character to caricature.

We see Brown as a young boy (twins Jamarion and Jordan Scott) living in the boondocks of South Carolina, son to a gambler and a tramp, hustling for white country clubs and brothels. We see James grow into a young hood, stealing clothes and starting fights to keep on keeping on. We see his fateful first meeting with longtime singing partner Bobby Byrd (Nelsan Ellis), over a prison brawl, and their funky fellowship. We see James abuse drugs, friends, rules, musical convention, you name it. Best and most exhilaratingly, we see James as a gifted musician, and a real sonuvabitch.

Mind you, none of Brown’s story happens in any order resembling the aforementioned business. Get On Up is an erratic and flashy history lesson in the vein of Oliver Stone in the early ‘90s (think a PG-13 Nixon with a more agreeable runtime and milder scope). We see Brown over the years for what an influence he was. The movie is post-plot; Taylor isn’t interested in telling a straight story, but rather in showing us the life and times of Brown in instances. It’s a stimulating way to offer up Brown, if not necessarily rational, or consistent.

Taylor has enthusiasm for his subject matter, and you see it in the big directorial choices he makes. He probably lucked out with Mick Jagger producing, since the music is licensed and the story authorized, but in a fair way. Taylor gets to try his hand at both the amazing and ugly parts of Brown’s life.

In one horrifying instance, we see young Brown being cruelly paraded around a boxing ring for wealthy white Southerners while blindfolded and being forced to spar with other black kids. It’s upsetting, and James at one point is knocked down. Then, on the ground, as he looks at the band in the distance playing, we start to see James thinking, listening, and beginning to hear the sounds of “Cold Sweat.” The song emerges, and James gets up, flips the mood of the scene, and regains a little bit of his pride knocking out another kid. It’s a ballsy moment, but it delivers in ways The Help never could. It’s in parts like these that you see glimmers of the movie’s grander ambitions.

Mind you, this is one great scene amidst dozens of questionably fiery instances like it. Of course this movie isn’t beyond musician biopic tropes (great concerts, redemption, abuse, artist versus their art), but Get On Up is at least never boring. The bombastically byzantine portrait is a little beyond Taylor’s grasp in stretches, but Boseman’s decade-spanning performance is the lynchpin for it all, as he keeps it compelling back and forth. Every beat of Brown’s story is brought on up by Boseman. The story may flip, but he stays the course and sees the guy through. In the end you love the music, and pause to re-evaluate the man making it.