Film Review: Guardians of the Galaxy

Are we having fun yet?! 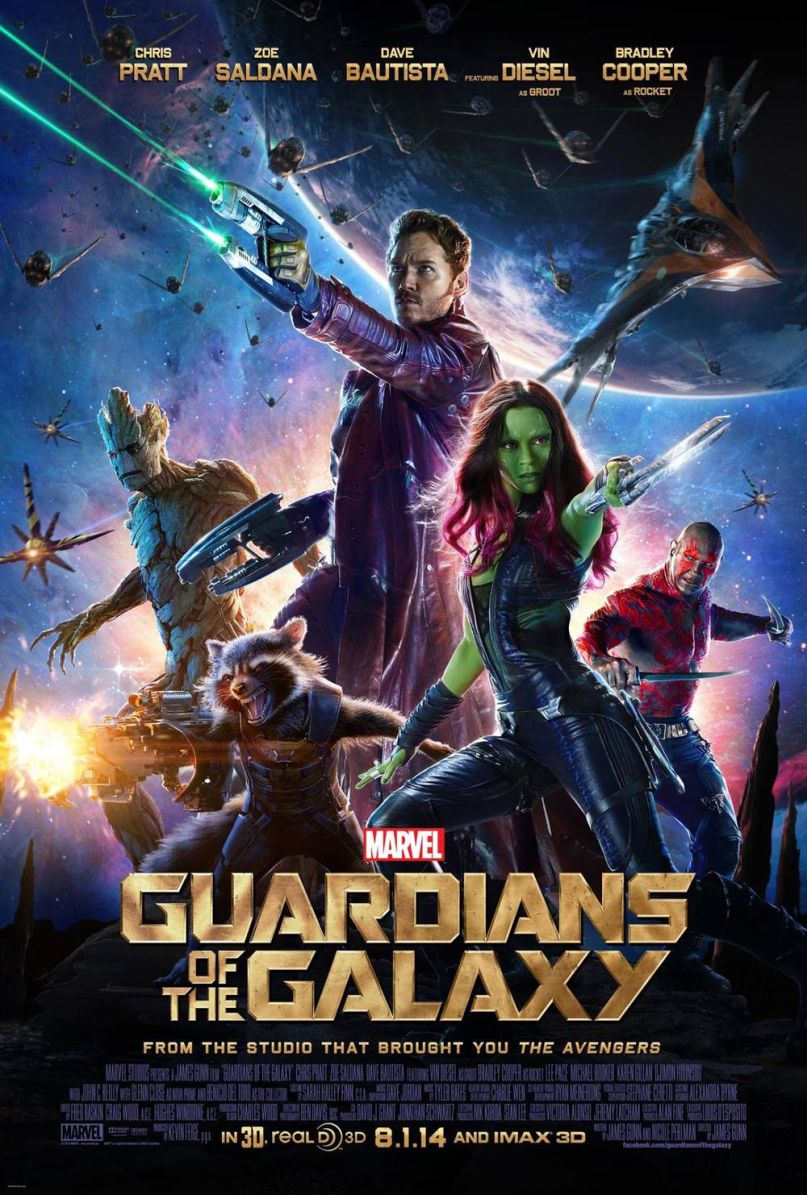 The Marvel Cinematic Universe really has it figured out, don’t they? Marvel Studios President Kevin Feige and company created a franchise of superhero films featuring Iron Man, Captain America, Thor, and The Incredible Hulk, which have succeeded on their own independent of The Avengers. Heck, three of these heroes begat mini-franchises of their own (though we’re still waiting for the dream follow-up to The Incredible Hulk in the form of Planet Hulk, hopefully starring current Hulk, Mark Ruffalo). All of these movies bring the fun to a subgenre devoid of it, thanks to Christopher Nolan’s bleak (but great) series of Batman films and his steely (but average) Man of Steel. However, if you are looking for the most, well, gleeful Marvel film, look no further than Guardians of the Galaxy. Director James Gunn’s first foray into big-budget movie making succeeds despite focusing on characters largely unknown to mainstream audiences and provides some of the most genuinely affecting moments of any Marvel film to date.

But before we get to the laughs and the tears, I must answer the question on so many people’s minds: Who the hell are the “guardians”? Early on in the film we’re introduced to Peter Quill, desperately longing to be known as Star Lord, who is played to perfection by Parks and Recreation’s Chris Pratt. He mixes a carefree attitude with toughness and heart that recalls Han Solo, or even Firefly’s Mal Reynolds. He’s more hurt than afraid when his life is in jeopardy, thanks to his captors not knowing who he is. He’s had his fair share of ladies and inevitably run into his fair share of problems. If given to the wrong actor, this role could have fallen into the depths of the all-too-familiar, chauvinistic, action-male archetype, but Chris Pratt? Who doesn’t love Chris Pratt?

Quill is a space pirate who is reluctantly thrown into a group of other ne’er-do-wells. Amongst these menaces to society are the beautiful, green-skinned assassin Gamora (Zoe Saldana, taking a stab at another huge franchise), strongman Drax the Destroyer (wrestler Dave Bautista), walking tree Groot (voiced by Vin Diesel), and Rocket, a walking, talking raccoon (voiced by Bradley Cooper). There’s something about a world-destroying orb ending up in the wrong hands, evil aliens, backstabbing, etc. And, of course, this group of misfits learn they need to work with one another to make it in their nutty galaxy. In not-so-typical fair … did I mention the talking raccoon and tree?

Rocket works not only due to ever-evolving CGI, but thanks to the energy Cooper brings to his performance. The Academy Award nominee gives Rocket an attitude straight out of Goodfellas, which makes perfect sense once you’ve learned Cooper based his accent off of Joe Pesci’s Tommy from that film. He’s super smart, he’s quick to quip, and he’s as lovable a creature as you’ll find in any action movie (why couldn’t Jar Jar have been so likeable?). As for Groot, in a polar opposite vocal performance from Cooper’s, Diesel turns in a performance as the tree of few words (“I am Groot” is his declaration and response to everything) and manages to steal the entire movie as the film nears its wild finish. The actor manages to match, if not exceed, his earlier vocal work as The Iron Giant. “Superman!”, indeed.

If there has been one chink in Marvel Studios’ armor, it’s been a lack of tear-jerking moments and genuine despair. There have been fleeting moments, particularly Agent Coulson’s death in The Avengers (which proved to be false thanks to dud series Marvel’s Agents of S.H.I.E.L.D.) and recently Steve Rogers’ reunion with an elderly Peggy Carter in Captain America: The Winter Soldier. However, during Guardians your eyes may well up with tears before the opening credits grace the screen. As for the film’s climax, words are spoken and read that will have audiences reaching for tissue. Gunn is careful to keep reminding us that this is supposed to be a fun ride but never lets us forget the danger the heroes find themselves in in both relatable and fantastical fashion. Hold on to your friends, as the poet once said.

Gunn’s eye-popping visuals, terrific soundtrack (purchase the film’s “Awesome Mix Vol. 1” as soon as you can), and a game cast help the writer-director along in his quest for pure popcorn entertainment. Watching Guardians after any D.C. film is like watching Pleasantville as the town turns to color when life starts to change, rules shift, and the abnormal becomes the normal. At the end of that film, a character asks, “What’s going to happen now?” and is given an answer of uncertainty. Same applies for the future of the comic book film, I suppose. Although the dreary Batman v. Superman: Dawn of Justice League of Shadows awaits, here’s to Guardians of the Galaxy for bringing back fun to the cinema for the long haul. (BEAT) (BEAT) I’m hooked on a feelin’/ High on believin’/ That you’re in love with me…