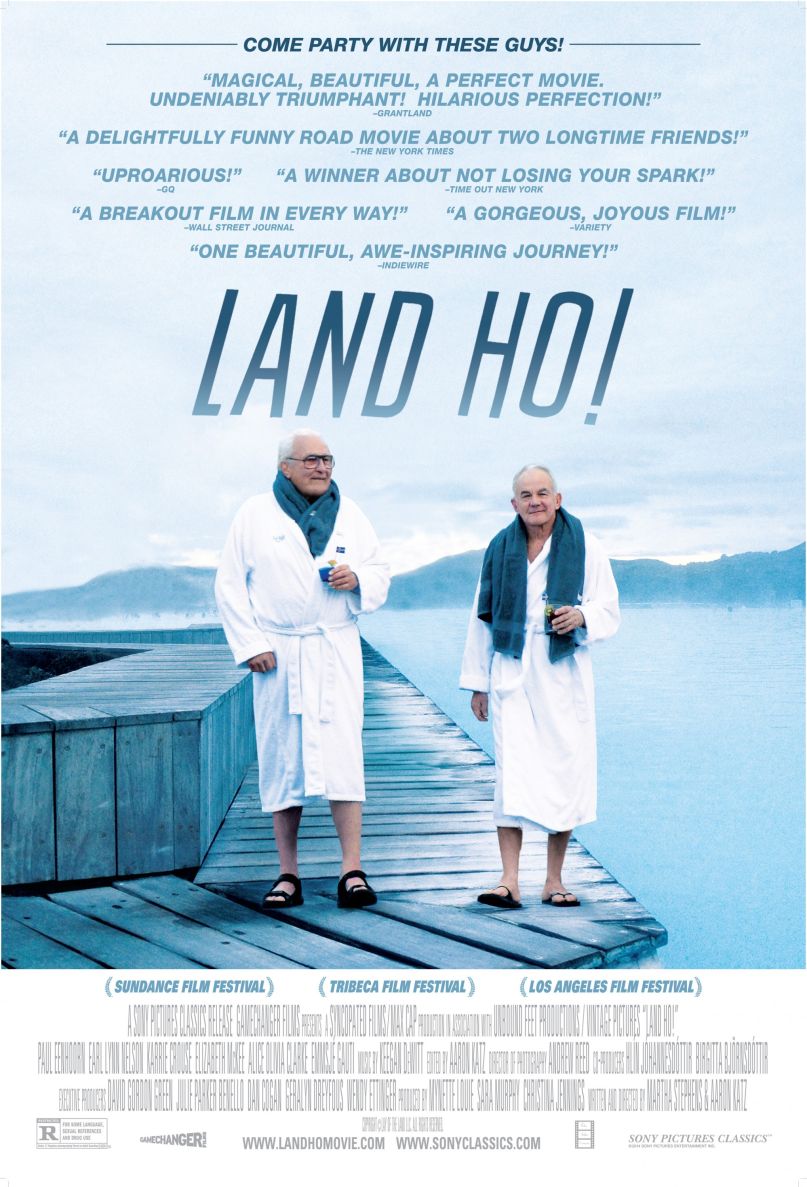 Meet the Old Couple. Mitch (Earl Lynn Nelson), a former New Orleans doctor, has all the drawl and dirty-minded eccentricities one might expect from a mannered good ‘ol boy. Colin (Paul Eenhoorn), his Aussie ex-brother-in-law, is a retired bank manager, who once dabbled in classical music playing in an orchestra. How and why would these dissimilar fogies be clinging to each other? Simple. They’re ex-in-laws. They don’t really have much going on. It makes total sense that these two would just pick up their things and go on a trip to Iceland. That’s the good-enough excuse of Land Ho!, a sweet, modest, oddball journey. Told in location-based chapters, this is a delightful new depiction of friendship and male bonding.

Colin shows up at Mitch’s for dinner one night. After rambling about things, catching up, and talking about Meg Ryan’s breasts for guy reasons, Mitch drops one on Colin: the two are going to Iceland.

What ensues is a standard but lovingly naturalistic travelogue about old friends and how sometimes they just make sense. Land Ho! is about insight into old age through dorky, understated, and out-there laughs. The two check out the nightclubs of Reykjavík, and meet intelligent young cousins (mixed with dirty old man jokes). Mitch and Colin check the geysers of The Golden Circle, but not without considerable discussion of euphemisms and babes. Mitch hits up a young couple on their honeymoon and proceeds to extoll what he finds to be earth-shattering advice on how women are “always right.” Colin reflects on failed businesses, relationships, and much more as he seeks out a little piece of mind, despite his yammering ex-brother-in-law. Land Ho! works in obvious ways, stealing laughs at the behest of naughty behavior and fish-out-of-water scenarios, and that’s just fine. It’s the quirky moments, the truths in between that make Land Ho! a little special.

In one of the movie’s nicest and most noteworthy bits, the two wind up wandering the moors of Iceland near one of their hotels. A little too much booze instigates the idea, but Mitch has “them glowsticks” he got at a nightclub. It’s a good laugh. For the next few minutes, we see black-on-dark grey silhouettes (with two glowsticks denoting each guy) as they get lost in the windy night. Colin unloads on Mitch’s ego for getting them lost. Mitch just won’t have any of Colin’s whining. It’s altogether honest, scary, superbly shot, and at times very funny.

This movie benefits from not condescending to its leads, allowing Nelson and Eenhoorn to just be old fellas. Mitch may be off-putting at times, and intrusive, or just really freaking high (he seriously finds every joint in Iceland), but his heart is always thinking straight. Colin, on the other hand, is so milquetoast that his little successes do feel like life-changing victories. In the end, you appreciate the two for what they have to say about friendship and how it evolves.

Land Ho! is carefully, patiently shot, using its unadorned Icelandic locales to pleasing affects. From the austere hotel bedrooms, to the gorgeously gray and green landscapes, Land Ho! is a convincing travelogue. Still no word from Google on whether or not Iceland’s tourism panel funded this, but that’s neither here nor there. Katz and Stephens owe Sofia Coppola a little bit of thanks. From the familiarly hip font choices, to the deadpan camerawork, to Katz and Stephens’ detached eye for stark hotel rooms, you can look at Land Ho! as a spiritual sequel to Lost in Translation in a way. It’s all about the tourist’s aesthetic, and using new locations as a metaphor for new experiences. Who cares if it’s not that innovative, or deep? Mitch and Colin appear to be having a decent time.