How Guardians of the Galaxy Topped the Charts

The story of a mixtape and a galaxy to be rescued 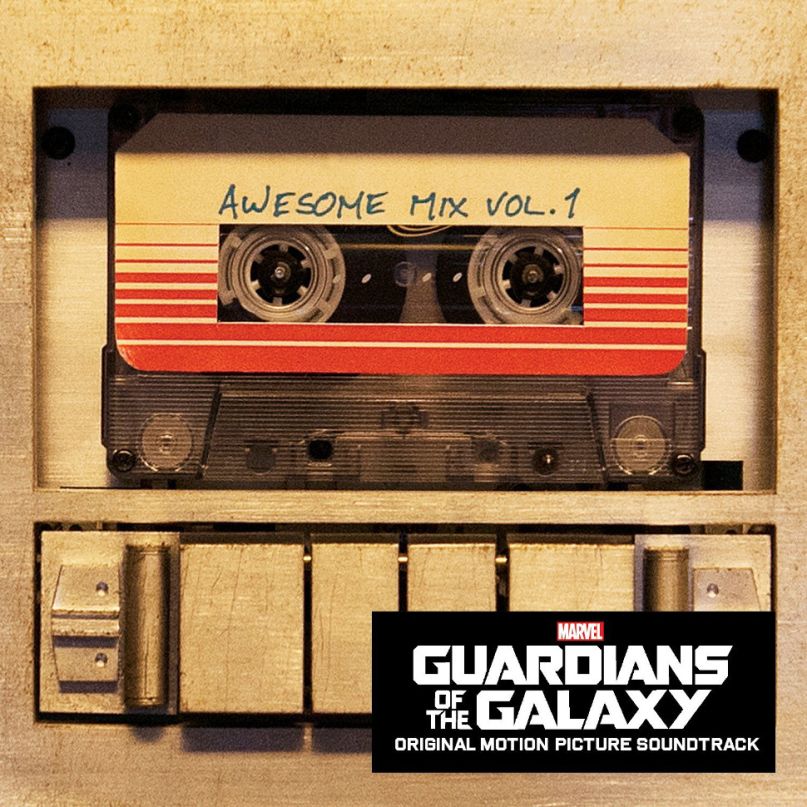 Ever wonder which movies inspire your favorite bands or how filmmakers work with artists to compile your favorite soundtracks? Sound to Screen is a regular feature that explores where film and music intersect. This time, Dominick Mayer explores how a blockbuster’s retro soundtrack scored a number one record.

(Note: the following will contain some spoilers for Guardians of the Galaxy, but we’ll keep them to a happy minimum. Or, alternatively, you could go see what’s probably the best film in theaters right now so that nothing will be ruined. Just a thought.)

Show of hands. Who would’ve thought in August of this year of our Lord two thousand and fourteen that the top-selling album in the US would feature the music of Blue Swede, The Runaways, Redbone, and Marvin Gaye? Well, that’s the world we now inhabit, wonderfully enough. As of today, the Guardians of the Galaxy soundtrack sits atop the Billboard charts, a testament to the genius of director James Gunn’s decision to couch what’s by far the weirdest Marvel movie to date (also, among the very best) in the pop hits of the ‘70s.

It doesn’t hurt that the soundtrack is now immediately associated with images like the adorable sapling version of Vin Diesel’s Groot swaying along happily to the Jackson 5’s “I Want You Back” or the menacing approach to Knowhere as David Bowie’s “Moonage Daydream” swells over the action. And there’s the matter of the soundtrack in filmic context, hand-titled “Awesome Mix Vol. 1” on a cassette tape given to Peter “Star-Lord” Quill (Chris Pratt) by his deceased mother. It’s this mix that follows Star-Lord on his adventures through the oddest reaches of space, this mix that serves as the soundtrack to his ascension into superhero status.

It’s only appropriate that a film about a battalion of misfits and outcasts features a soundtrack that’d feel a lot more appropriate in a Quentin Tarantino movie than a Marvel spectacle. Indeed, Blue Swede’s “Hooked on a Feeling” is iconically associated with Tarantino’s Reservoir Dogs. But Guardians makes a strong case for the reclamation of all these songs to its own cause. At turns ironic (“Escape [The Pina Colada Song]” scores a prison break sequence) and heartfelt (back to that in a moment), the Guardians soundtrack is a subversive move for a cinematic universe that to this point has been set to a great many ponderous string arrangements and not a lot else.

In recent interviews, Gunn has touched on the process behind putting together such an odd assemblage of music. As told to Vulture, it was accessibility that Gunn had in mind from the start: “We’re thrust onto a bunch of strange planets with strange landscapes, and the familiarity of the pop songs made it all a little more palatable. They simultaneously grounded us and provided a really fun juxtaposition.” From early on, the music not only tethers the audience to something that makes sense to them, but does so in a way that treats these pop curios of yesteryear with love and reverence, rather than ironic detachment.

That’s a huge key to understanding why Guardians is taking off as it is, and this music with it. It’s a completely sincere film. It’s also a sarcastic and arch one, sure, but above all it’s a story of formed families in the face of untouchable, possibly apocalyptic adversity. Gunn’s genuine love for his entire misfit universe is palpable, and he understands that even the weirdest people in the galaxy usually just want a place to call home and some people to call friends. Even Star-Lord, for all his bluster and hustling, is really just a long-lost Earthling drifting through space and trying to make a living.

It’s on Star-Lord that the film begins. In possibly the most heartbreaking opening scene to an American film since Pixar’s Up fast-forwarded through an entire love story in a few all-too-short minutes, Guardians begins in a hospital, with the young Star-Lord refusing to touch his dying, bedridden mother’s hand out of childhood fear and anxiety. He retreats into the hallway as she flatlines, running out of the hospital and into the waiting tractor beam of an intergalactic cruiser. It’s a scene straight out of prime-era Spielberg, a misunderstood kid struggling with an escalating series of things he can’t even begin to understand.

Jumping forward a number of years, Star-Lord is a junker, hired by top-dollar clients to roam the stars “finding” items of particular interest. After the prologue, we find Star-Lord wandering a desolate planet in search of the orb that’ll ultimately kick-start the film’s labyrinth story of thieves, wanderers, and planet-crushing ideologues. As he dances around with his Walkman and headphones to Redbone’s “Come and Get Your Love”, one of the film’s handful of one-hit wonders, he’s shoved into the corner of the frame by massive overlay text of the film’s title. It’s a perfect tone-setting moment; clearly, this isn’t your everyday superhero tale, and Star-Lord is far from the quintessential chiseled-jawed superhero. (Real talk, though: Andy Dwyer got swole at some point.)

The heart of the film is that the Guardians are all adrift in their universes, emotionally and spatially lost. So, it’s appropriate that the film starts on a song that croons, “Nothin’s a matter with your head, baby, find it/ Come on and find it/ Hell, with it, baby, ’cause you’re fine and you’re mine.” It’s a mission statement as much as a stylistic choice, a ballad of inclusion in a cold universe. It’s also Star-Lord’s best way of seeking out maternal advice while lost in space; the song’s inquiry of “Don’t you feel right, baby?” allows Star-Lord to converse with a woman that he’s lost, one who he rejected right before her passing in a fit of childish sadness. The film is, among about 50 other things, the chronicle of Star-Lord’s struggle to accept that he was just afraid and not a bad person.

Pitched as a mixtape made with love from mother to son, Guardians is a film that carries the timbres of nostalgia and longing from start to finish, even as it’s also deliriously funny and thrilling. And in the film’s final scene, when we learn that Quill adopted Star-Lord as a moniker based on his mother’s preferred term of endearment for him, that longing comes full circle. He finally opens his last birthday present, one he’s carried through space with him, and it’s a copy of “Awesome Mix Vol. 2”. Star-Lord doesn’t belong in this world, and even his beloved, embattled Walkman stands as an indicator of how far removed from this world he is. But he has a family now, sort of, and a new mixtape. And there’s a galaxy waiting to be rescued.