Is Taylor Swift’s “Shake It Off” video racist? 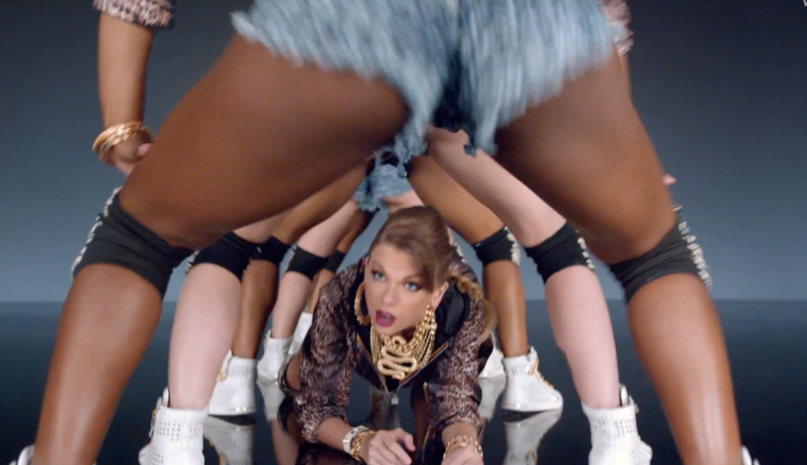 Taylor Swift is the latest high-profile musician to come under fire for alleged racism as some have accused her latest music video of appropriating black culture. In the video for “Shake It Off”, which serves as the lead single to her new album 1989, Taylor dresses in variety of outfits, including a ballerina, a cheerleader, a break dancer, a cross between Lady Gaga and Kraftwerk, and a rapper. It’s the latter that has drawn criticism from some on Twitter, specifically over the black female dancers who twerk alongside her. (The video will no doubt draw comparisons to Lily Allen’s “Hard Out Here” video, which also came under fire for featuring black female dancers twerking.)

Below, you’ll find a collection of some of the more critical tweets. Update: Earl Sweatshirt has also expressed his opinion, calling the video “inherently offensive and ultimately harmful.”

Taylor Swift's new video is a lot like the one for Hard Out Here by Lily Allen. Is she going to be screamed at and called a racist now too?

Aww, cute!!! Taylor Swift made a mockery of black culture and black womanhood in her new music video! What a sweet, absolutely racist phase.

#ShakeItOff is racist and offensive. Why does your self expression and rebellion have to come off the backs of black people? @taylorswift13

yeah also wtf did taylor swift just do omg is she pulling a katy perry? where are all these racist white girls comign from tbh

Others have come to Taylor’s defense, however; specifically, a post on the Tumblr page Orhgasm has gained a bit of traction online. It reads as such:

as a proud ass black man, the taylor swift video for her new song “shake it off” was not problematic or even close to racist.

If you bothered to watch the video, the video was about being happy and dancing and celebrating other people’s dancing. One of them happened to include twerking. Taylor was not “cultural appropriating” anything and she wasn’t “being racist” by only having black woman in that part of the video. there are many other african americans in the video and in her many other videos so even calling her racist means you need to log out. She was celebrating people’s dancing and how they celebrate music throughout the video and a large variety of black woman twerk. Would it honestly make sense if Taylor had 100 or so white girls try to twerk? Either way, y’all would still throw hate or shade either way. But calling her racist is the shit I don’t stand for because she isn’t.

Watch the full video below.