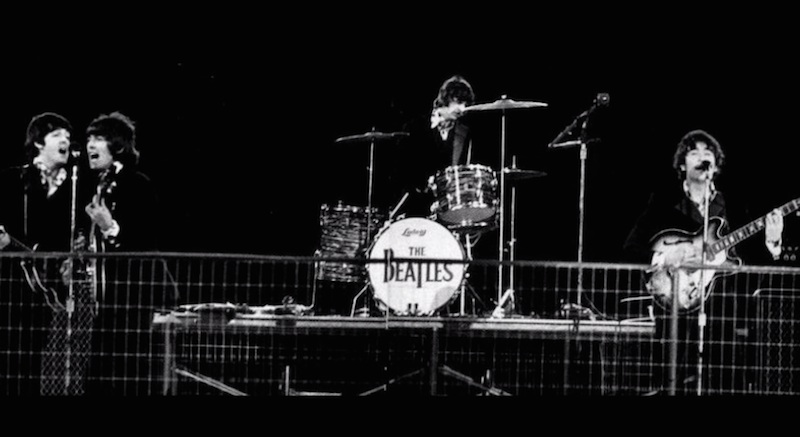 Yesterday, we celebrated the 50th anniversary of The Beatles and Bob Dylan meeting for the very first time (aka, the day the Fab Four smoked their first joint). Today, we look back on another historical moment in the legendary group’s career: their final concert, which took place 48 years ago on August 29th, 1966 at Candlestick Park in San Francisco.

(While they did perform together later in January 1969 on the rooftop of their label, Apple, the event was unannounced and thus, not considered an “official concert”.)

The Beatles’ last show in Candlestick Park, then home to the San Francisco Giants, featured an 11-song set over the course of about 30 minutes. Among the hits played were “She’s a Woman”, “Day Tripper”, “I Feel Fine”, “Yesterday”, and “Paperback Writer”.

As the band knew it would be their final proper concert together, John Lennon and Paul McCartney reportedly brought a camera onto the stage with them to take photos of the crowd and personally document the momentous occasion. The Beatles had also requested their press officer, Tony Barrow, to record the concert on cassette. However, since the tape could only hold 30 minutes on each side and Barrow forgot to turn it over towards the end of the set, the closing song (“Long Tall Sally”) was never recorded in full.

It’s unknown just how that recording was distributed and bootlegged — to this day only two tapes (the original and one copy) were known to have been made — but, boy, are we lucky that it did. Below, listen to the audio from that very special night, followed by a lengthy and detailed account of the show and a few of the events that came before and after it, including George Harrison saying on their flight out of San Francisco: “That’s it, then. I’m not a Beatle anymore.”

Although they made an unannounced live appearance in January 1969 on the rooftop of the Apple building, The Beatles’ final live concert took place on 29 August 1966 at Candlestick Park in San Francisco, California.

The Beatles took 65% of the gross, the city of San Francisco took 15% of paid admissions and were given 50 free tickets. This arrangement, coupled with low ticket sales and other unexpected expenses resulted in a financial loss for Tempo Productions.

Candlestick Park was the home of the baseball team the San Francisco Giants. The stage was located just behind second base on the field, and was five feet high and surrounded by a six-foot high wire fence.

The compère was ‘Emperor’ Gene Nelson of KYA AM 1260, and the support acts were, in order of appearance, The Remains, Bobby Hebb, The Cyrkle and The Ronettes. The show began at 8pm.

The Beatles took to the stage at 9.27pm, and performed 11 songs: Rock And Roll Music, She’s A Woman, If I Needed Someone, Day Tripper, Baby’s In Black, I Feel Fine, Yesterday, I Wanna Be Your Man, Nowhere Man, Paperback Writer and Long Tall Sally.

The group knew it was to be their final concert. Recognising its significance, John Lennon and Paul McCartney took a camera onto the stage, with which they took pictures of the crowd, the rest of the group, and themselves at arm’s length.

As The Beatles made their way to Candlestick Park, Paul McCartney asked their press officer Tony Barrow to make a recording of the concert on audio cassette, using a hand-held recorder. The cassette lasted 30 minutes on each side, and, as Barrow didn’t flip it during the show, the recording cut off during final song Long Tall Sally.

Barrow gave the original tape of the Candlestick Park concert to McCartney. He also made a single copy, which was kept in a locked drawer in Barrow’s office desk. The recording has since become widely circulated on bootlegs, although quite how is not known.

The final show saw perhaps a slightly more energetic performance than usual from The Beatles, and was longer than their usual 20-25 minute duration. They barely paused between songs, although their on-stage patter was notably looser and less scripted than normal.

Particularly revealing are McCartney’s comments before Paperback Writer, during which he questions the group’s future; and Long Tall Sally, which may have carried a veiled reference to the withdrawn ‘butcher’ artwork for Yesterday… And Today.

Just before leaving the stage, John Lennon teasingly played the opening bars of In My Life, before running off to join the rest of the group backstage.

The Beatles were quickly taken to the airport in an armoured car. They flew from San Francisco to Los Angeles, arriving at 12.50am. During the flight George Harrison was heard to exclaim: “That’s it, then. I’m not a Beatle anymore.”