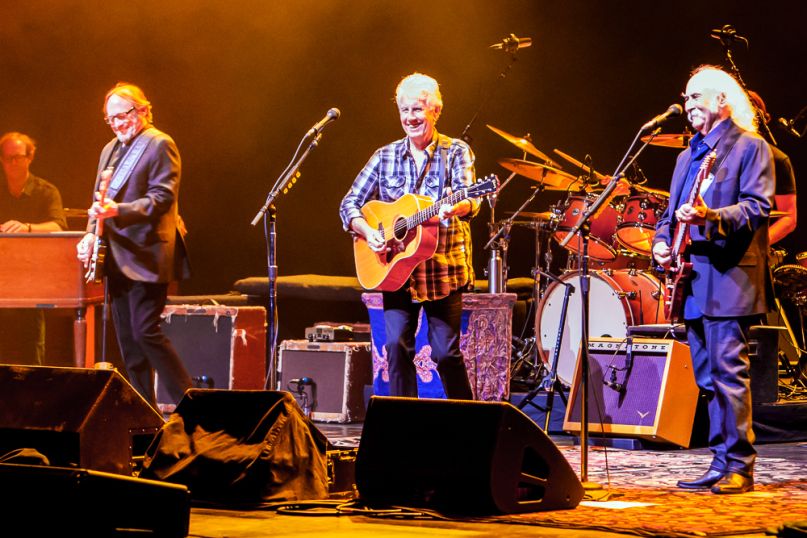 Last night, I had the great fortune of being able to revisit Crosby, Stills and Nash (CSN) at Ft. Lauderdale’s Broward Center for the Performing Arts. Many decades later, they’re still the greatest and have only aged for the wiser.

Full disclosure: Being a child of the ’60s makes experiencing CSN again an extremely special moment. I have lived with them for 45 extraordinary years and have amazing gratitude and respect for their music and their unique style (or perhaps blend) of rock, folk, love, and political poetry. David Crosby, Stephen Stills, and Graham Nash have all provided the appropriate guidance over the years and continue to make up a large part of my musical DNA.

If the 2,700 packed seats and the deafening roar of last night’s South Florida audience are any indication, I am confident that tens of millions of other music-loving hippies, groupies, and cool lions and lionesses feel the same way. Throughout the 20-plus-song set, veteran fans were dancing, screaming, and jumping up and down to the pulsating magic of the band’s solid rock ‘n’ roll rhythms. But what’s always been CSN’s hallmark is their knack for commentary, and their messages continue to eschew the dust that’s fallen on many of their peers.

As I listened to the songs that I’ve been hearing for so many decades – “Our House”, “Marrakesh Express”, and “Teach Your Children” to name a few – it gave me the opportunity to reminisce on my life and think about some of the extraordinary things I’ve been blessed with doing while enjoying their work. My days at Monmouth, Rutgers, NYU, The New School, and the New York City experience in the late ’60s and early ’70s were intertwined with CSN (and CSN&Y, for that matter) on a daily basis — they completely rocked my world.

And they still do.

Admittedly, the band’s more recent work doesn’t exactly match their classics, but they’re just as politically charged. Take “Burning for the Buddha”, for instance. Written by Graham Nash, the song honors the public, self-inflicted deaths of Tibetan Monks in retaliation of the Chinese stronghold on Tibet, and it just blew me away with its political and spiritual message. As is their trademark, the band supported their profound lyricism with some heart-pounding, wholesome rock that reverberated into my soul. To wit, I will never forget this performance.

Having listened to them again live after such a long time, I can’t imagine why I hadn’t returned sooner. Stills remains one of the greatest guitar players on the planet — think: mesmerizing — and when combined with the talents of Crosby and Nash … it’s just beyond words. They shape the hearts and minds of generations that go way beyond my own. With so many exceptional acts back in the garage, aka retired, it’s a gift to be able to experience CSN on stage in 2014. The camaraderie, the delivery, and the professionalism is something that’s best described as amazing.

Old rockers don’t get old, my friends; they just get better. So rock n’ roll on till the break of dawn whenever you can. Treat yourself and relive some of the best years out there. I did.