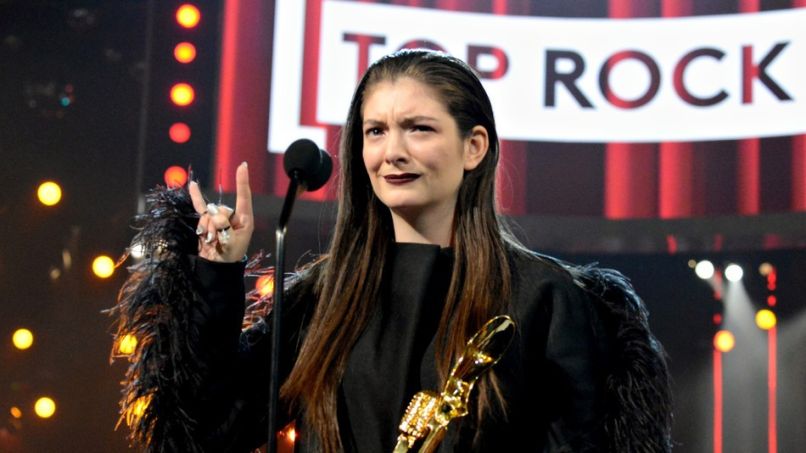 At last night’s MTV Video Music Awards, Lorde made history by becoming the first woman to win the award for Best Rock Video. Of course, the 17-year-old New Zealand electropop artist doesn’t make rock music at all, but in winning the award, she beat out real rockers like Arctic Monkeys and The Black Keys. And with the feat, she joins an illustrious group of previous Rock Video winners that include Pearl Jam, Foo Fighters, Metallica, Soundgarden, Guns N’ Roses, Green Day, and AFI.

Why then was Lorde nominated in the Best Rock Video category, and not Best Pop Video or Best Female Video? MTV has offered no explanation, but do they really need to? For the VMAs, the award portion of the show has long been secondary to the performances, more often than not given as an incentive to those willing to show up.

With male acts such as Kanye West, Drake, Eminem, Justin Timberlake, and Pharrell noticeably absent from last night’s gala, MTV leaned on the women to drive ratings. Thus, nearly every big-name pop star, from Ariana Grande to Nicki Minaj to Beyonce to Katy Perry to Miley Cyrus, were not only in attendance but up for multiple awards. Of all those aforementioned singers, Lorde is the easiest to justify as a “rock” artist due to her goth-punk persona, participation in Nirvana’s Rock ‘n’ Roll Hall of Fame reunion, and cosigns from rockers like David Bowie, Dave Grohl, and Jack White. By including Lorde in the rock category, MTV left room in the “pop” category for its other big-name attendees, yet was able to award Lorde for her own attendance by giving her a Moonman.