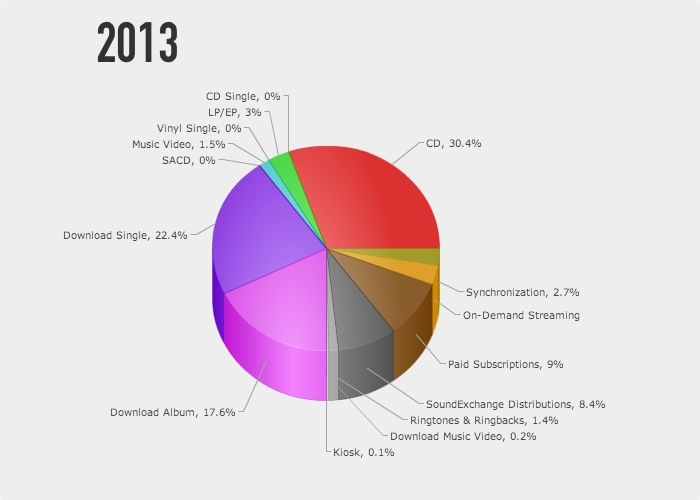 From vinyl and cassettes to CDs and MP3s, the way we consume music has drastically changed a number of times over the last three decades. To illustrate this point, Digital Music News has created a handy GIF documenting these various technological advancements and how they’ve affected music industry revenue.

Digital Music News used Recording Industry Association of America (RIAA) data from 1983 to 2013. The graphic reflects how dominant vinyl was during the ’80s, the takeover of cassettes in the ’80s, the CD’s unstoppable run through the mid-2000s, and, finally, the advent of digital music consumption, from streams and MP3 downloads. It goes without saying, but the changes are quite drastic.

Over at the RIAA website, there’s a more expansive explanation for the numbers behind the graphs. Since 2008, total US music industry revenues have dropped $1.8 billion, to just over $7 billion annually. Last year, physical music sales accounted for around 35% of all revenues, while downloads raked in some 40%.

What’s interesting is the rise of streaming services. In the 2007 graph, you can see streaming taking up just a tiny sliver of pie, comprising just 3% of revenue. However, by 2013, that slice expanded to around 21% of total industry revenues. In just the last year, paid subscription services drastically increased, up 57% to $628 million in revenue. With the introduction of new streaming platforms like Beats Music, Amazon Prime Music, and YouTube’s forthcoming Key Music, along with the continued dominance of platforms like Spotify and Rdio, that number should only rise.

(Read: The Elephant In The Music Room)

While much fanfare has been made regarding the resurgence of vinyl, vinyl sales only accounted for 3% of all revenues in 2013. While these numbers rose from 0.1% in 2006, and will undoubtedly continue an upward trend, it’s still a niche market, a far cry from its glory days in the early ’80s. (For instance, vinyl accounted for 51.7% of revenue in 1983 alone.) Keep in mind that these are only measurements of the United States’ statistics; worldwide music industry data would paint a much different picture.

For stills of each year’s pie chart, click here.