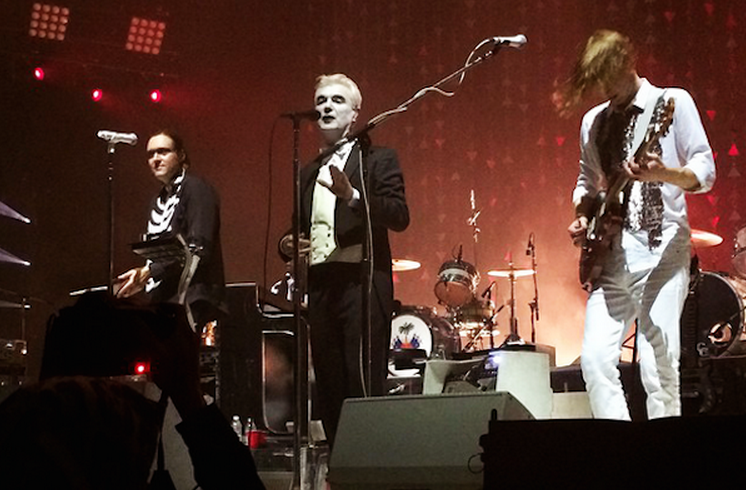 Over the course of their Reflektor tour, Arcade Fire’s stable of covers has run the gamut of rock ‘n’ roll, including Feist, The Smiths, Neil Young, and Jane’s Addiction. However, during this weekend’s residency at Brooklyn’s Barclays Center, the band celebrated old-school New York punk.

On Friday, they invited Buster Poindexter himself, New York Dolls frontman David Johansen, to perform his 1987 classic “Hot Hot Hot”. Then, on Saturday, Marky Ramone played drums on “Don’t Wanna Go Down to the Basement” and “I Wanna Be Sedated”.

So, just who would did they call up or Sunday’s grand finale? Longtime friend of the band David Byrne, who dressed as Dracula and sat in for the band’s performance of Suicide’s 1979 single “Dream Baby Dream”. Watch fan-shot footage below.

As armchair detectives will note, Arcade Fire first hinted at Byrne’s appearance during Saturday’s set, as the bobbleheads briefly sang along to Talking Heads’ “Psycho Killer”. Previously, Byrne appeared on The Suburbs track “Speaking in Tongues”, and has also performed with Arcade Fire live on several occasions.

A few other factoids from last night’s show: The bobbleheads sang along to LCD Soundsystem’s “All My Friends” during intermission, and director Spike Jonze wore the Will Butler bobblehead and crowdsurfed during “Normal Person” (via ArcadeFireTube).