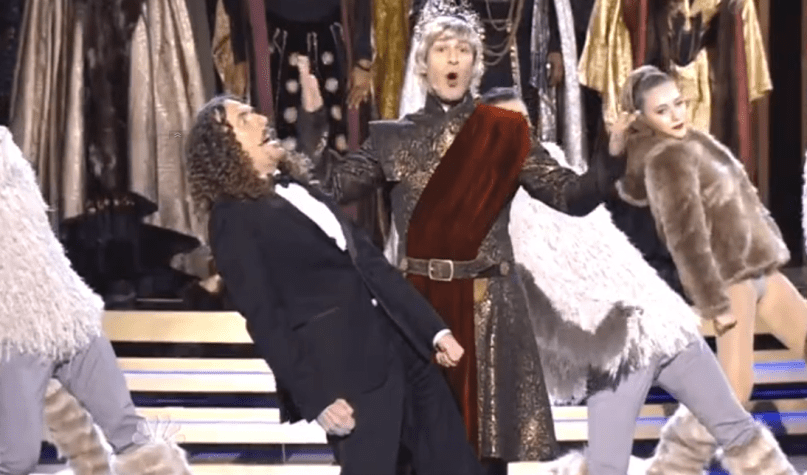 Tonight’s 66th Primetime Emmy Awards brought plenty of memorable moments. For instance, Gwen Stefani totally butchered Stephen Colbert’s name, and then Jimmy Fallon went ahead and delivered half of Colbert’s speech for him. Or when they gave an award to the ceremony’s director while he was actually directing? But as far as actually intended comedy gold was concerned, the award should have to go to one “Weird Al” Yankovic for his very special mid-show performance.  (Fun fact, Yankovic has an Emmy on his mantle for an episode of The Simpsons.)

Reaching deep into his bag of satirical tricks, Yankovic turned instrumental theme songs from several Emmy-nominated shows into amazing referential parodies. The Mad Men theme became a joke about how Jon Hamm has never won an Emmy, but still wins ’cause he’s Jon Hamm. Meanwhile, the Game of Thrones title song was tuned into a plea for George R. R. Martin to hurry up and write more Game of Thrones books. A tired joke maybe, but Andy Samberg made a guest appearance as Joffrey Baratheon, having a briefly creepy interaction with actress Lena Headey (aka Cersei Lannister).

The “Weird” one also poked a little fun at Homeland (“Inigo Montoya grew a beard!”), Modern Family, Scandal, and more, dishing out the little good-natured fun that we’ve come to expect from a truly memorable awards show outing. Yankovic for 2015 host, anyone? Or, better yet, Yankovic for Super Bowl Halftime performer.

(Read: The 10 Most Rockin’ TV Theme Songs of All Time)