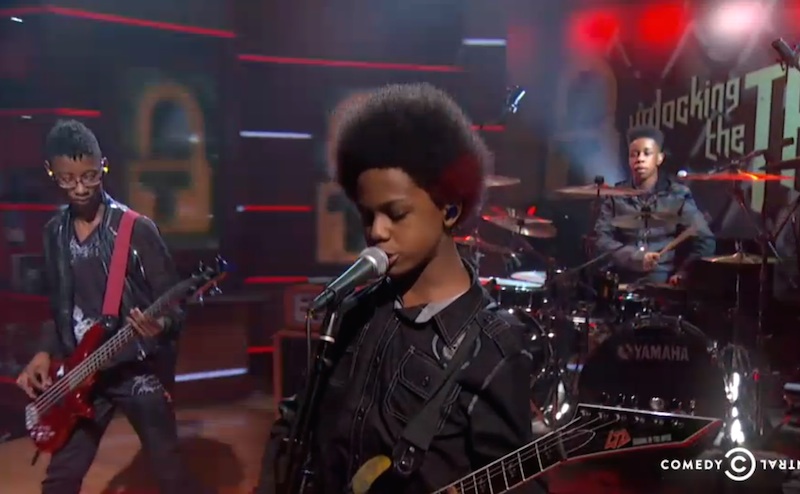 Back in July, Unlocking the Truth — the metal band comprised of three Brooklyn 8th graders — inked themselves a mind-blowing, two-album Sony recording contract worth upwards of $1.7 million. Not one to rest on their laurels (yes, even those with a price tag of nearly $2 million), the trio has continued its meteoric rise, appearing on last night’s episode of The Colbert Report.

During the interview portion, Colbert spoke to the three-piece about the band’s origins, their whopping record deal, their forthcoming EP entitled Free As You Wanna Be, and of course, junior high. Choice moments from the interview include when:

— Colbert asked them to pick their favorite school subject and drummer Jarad Dawkins answered with a super straight face: “Nothing.”

— Frontman Malcolm Brickhouse explained the meaning behind the band’s name: “We’re unlocking the truth about life … and that you could do whatever you wanna do. Kids think that they can’t do anything ’cause that’s what other people tell you to do, but if you look past that and just believe in yourself, you can accomplish anything you wanna do.” Well said, little man.

Later, Unlocking The Truth took the stage to play two tracks off Free As You Wanna Be, “Monster” and the title track. If you were somewhat skeptical about the group’s legitimacy, their impressive live performance will surely put your doubts to rest.