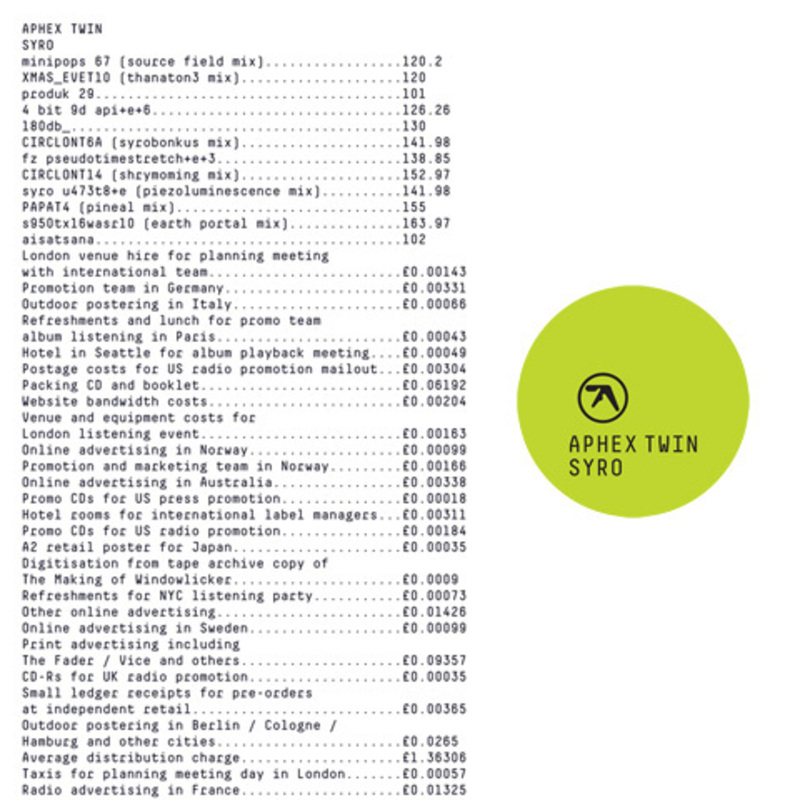 Noise is only that until one begins to understand the language. Better than any supercomputer, the human brain begins filtering through the information in an attempt to find reason amid the deafening chaos. When discovering Richard D. James, it’s like breaking through the womb into a new sonic universe. Taking on many monikers (Aphex Twin, AFX, Caustic Window, GAK, The Tuss, etc), James is the physical embodiment of some omnipotent being. A force of audio/visual dissonance that intermittently arrives to transform our own astral plane. Those who explore and understand the eccentricities of the language take comfort in the waves of aural schizophrenia, demented bass lines, contorted vocals, and shifting analog ambiance. Those incapable of the challenge remain stranded in the lukewarm pool of the status quo.

Over a decade removed from his last full-length effort under the Aphex Twin guise, James has (momentarily) become less punishing. Focusing less on the drill ‘n’ bass that pierces 2001’s Drukqs and embracing the bliss that coursed through the core of his 1996 namesake, the 12-track SYRO doesn’t just preach to his deep net elite, but to all those with an optimistic outlook on the unknown. With two young children now at home, including a five-year-old electronic “producer,” James’ everyday life is most likely saturated with enough shrills that they have fallen away from his production palette. Between the sheer lack of jarring, speaker-damaging moments, his utilization of familiar glitch-hop melodies during opener “minipops 67 [120.2]”, the nostalgic chillwave eerily guiding the start of “4 bit 9d api+e+6 [126.26]”, and techno’s legendary (DJ-friendly) amen break during “180db_ [130]”, SYRO peaks as Aphex Twin’s most accessible album since his ambient works. But a published gear list of over 130 items attests that the production is no less technical.

What the list cannot convey is the prowess of the album’s mixdown. As dysfunctional and chaotic as the tracks may become, the individual arrangements float sublimely across the mix. During “s950tx16wasr10 [163.97][earth portal mix]” the echoes of what vaguely resembles a rubber ducky manage to survive through the drum and bass shuffle and garage undertones. Even when deploying the same break that countless other tech-heads have layered over the past 30 years, a cache of fidgeting electronics lies just below the surface demanding for repeat spins.

Far from kowtowing, James understands his web of inspiration is now far greater than it was during the ’90s. Just recently, he was in a minor sampling scandal with Kanye, and Skrillex called “Flim” his favorite track of all time — not to mention that a growing portion of his audience was still in day-school when Aphex Twin was hitting its plateau. On one side, with the term EDM, genres no longer matter. So, an 18-year-old is as likely to groove without prejudice to the haunting acid-jazz of “produk 29 [101]” (having been groomed by the likes of Gramatik and Gesaffelstein) as they are to celebrate alongside James during the anthemic jungle breaks of “PAPAT4 [155][pineal mix]” (thanks to dubsteppers Rusko and Caspa), like their 45-year-old raver counterpart who hasn’t explored outside of hardstyle since 1995. However, with massive marketing budgets behind an Aphex Twin blimp and worldwide promotions, the potential new audience mustn’t be scared by another “[Equation]”. The battered bluesy electro of “syro u473t8+e [141.98][piezoluminescence mix]” has broken new ground, yet is practically easy listening when compared to his former torrents of custom-built synthesizers.

With a young family in tow, the core of Aphex Twin has evolved. At one time eager to perpetrate the god-like characterization of the Aphex Twin moniker, the presence of family during SYRO humanizes this influential producer. Although the vocals are indistinguishable, just knowing that James’ parents, wife, and children entered a room to collaborate on a track as twisted as “CIRCLONT14 [152.97][shrymoming mix]” makes the release more tangible. It also gives hope that fans old and new can witness James in a live setting stateside. This revelation makes James no less a genius. Producing a brand of music with zero ability to make it onto the radio, little notoriety behind his name, and even less public celebrity, he and Warp have made SYRO one of the most buzzed about albums of 2014 by mobilizing a broad base with a series of unconventional tactics. An image campaign kickstarted by a “fan” merely trying to disseminate the nearly lost Caustic Window release.

The release of SYRO is hinted to be just the beginning of a larger Aphex Twin takeover. Enveloping the electronic community in the warmth of closing piano arrangement “aisatsana [102]” (a track reminiscent of Drukqs cut “Avril 14”), James has primed the Aphex Twin for its next metamorphosis — one that has promised to be more combustible than the beats that ground SYRO.