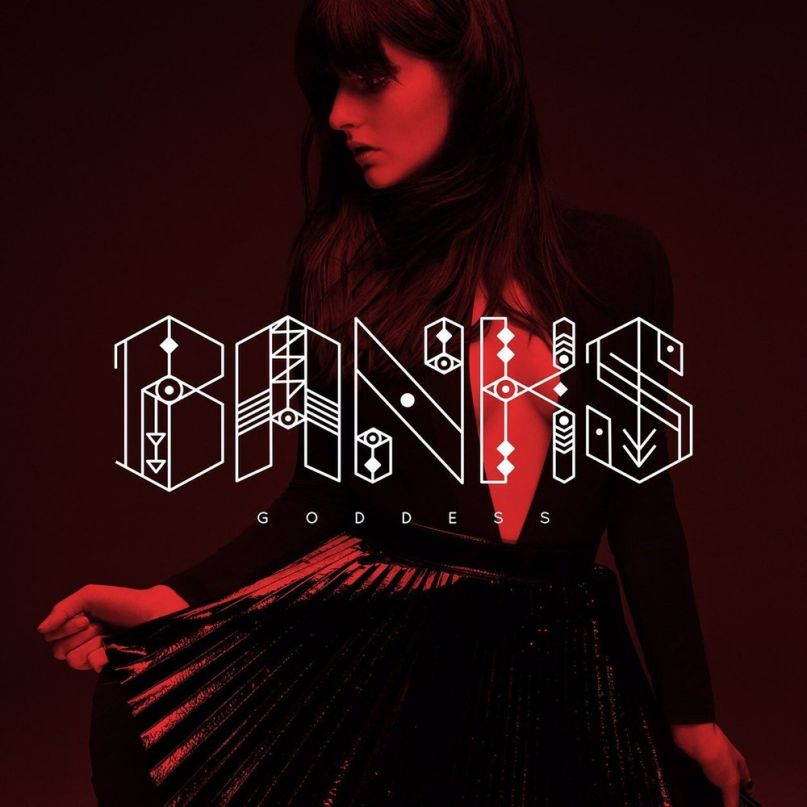 Listening to Banks’ debut LP, Goddess, now, at the time of its release, it’s easy to forget the mystery that surrounded her emergence into the music world. In fact, the idea of mystery as a marketing tool seems to have faded away as quickly as it became en vogue, with even Aphex Twin giving interviews these days. Appropriately, Goddess leaves little to the imagination, with the Los Angeles native taking a confessional tone throughout the album. Likewise, the songwriter has been doing more press, lifting a veil on herself in a way that’s nothing short of an M. Night Shyamalan plot.

We know that Banks began songwriting in high school as a way to cope with her parents’ divorce. She waited nearly a decade to release any of the music in order to hone her craft. She has embarked on whole tours, including an opening slot with The Weeknd and an appearance at Coachella, to ensure that she was ready to exist on all levels of pop stardom upon her album’s release. She has sought the advice of friends Ellie Goulding and Lily Allen on how to handle the new-found attention.

The mystery that once surrounded Banks wasn’t so much a marketing tool as it was a protective cloak. That has now been removed, leaving the music to stand for itself. And that seems like what she wanted all along.

Outside of the music, Banks has done her part to connect to her fans directly. She famously gave out her phone number to fans in the face of criticism for not using social media (she has since eased into the digital communication realm). But even speaking to Banks directly is unlikely to get as personal as, say, a song titled “You Should Know Where I’m Coming From”. “What if I said I had problems that made me mean?” Banks asks a potential lover, also questioning whether there would be interest if they knew she “would break [their] heart.” The song is striking in the honesty that Banks has with herself more so than the fact that she is willing to share these things with her audience. Difficulties with intimacy or personal demons aren’t used as excuses as much as they are presented as naked truths, traits that maybe she can overcome in time, but are still the reality of the present.

This kind of self-actualized presence speaks to the time Banks has taken in emerging into the music world. Often — particularly in pop, where children can rise to fame — listeners are faced with the jarring task of witnessing musicians realize who they are in the public eye. Even someone as praised as Lykke Li all but disavowed her much loved debut, Youth Novels, this year as immature. This can be conflicting if the listener relates to the work, but Banks’ gestated maturity supersedes that problem, thanks in part to first assembling a strong team of collaborators. She’s grouped some of the best producers in music for Goddess not because she needs the help, but because she knows how to accentuate her songs. SOHN and Shlohmo aren’t artists to hide behind; they’re partners in creation. Even Michael Jordan had Scottie Pippen.

This is best demonstrated on her strongest song to date, the bold, Shlohmo-backed “Brain”. The breakdown in the middle is all the producer’s work, but the show-stopping moment comes where Banks reaches vocally in the song’s latter half. She sings from a rarely shown willingness to struggle, similar to Ezra Koenig’s emotionally bare conclusion to “Hannah Hunt”. “Everything’s a game, trying to look smart but not too smart to threaten everything they say,” Banks says in one of the album’s lyrical highlights, capturing the cat and mouse game of being highly intelligent and dealing with a flirtation. She doesn’t come across as conceited in this moment, but, again, confident and self-aware. After all, the album is titled Goddess, and it doesn’t come across as overly self-involved, but powerful and in-control, a state-of-being she wishes for anyone, male or female, who listens to her album and relates to her worldview.

As Goddess is a debut, it is not without its blemishes. Where Banks stumbles are the moments where the subtle, of-the-moment production cues fall away. The acoustic guitar-accompanied “Someone New” lacks some of the lyrical elegance she is able to display in her often confessional tone, and the aesthetics of the track sound out of place on the LP. Likewise, closer “Under the Table” is not the piano-driven denouement it wants to be, striking more as an afterthought from a strong collection of songs. It’s noble in its goal, but just not exceptional enough to accomplish it.

But these slight missteps are not enough to detract too greatly from a singular vision. The Jamie Woon- and Lil Silva-assisted “This Is What It Feels Like” sounds perfectly comfortable next to a Shlohmo-produced track (“Brain”). In fact, only the tracks produced by Tim Anderson (Alex Ebert’s former bandmate in Ima Robot, and a good producer who does nothing wrong here except fail to aesthetically match the album’s other players) find Banks out of her element. His work attempts to show her range, but instead muddies up the album’s vision.

Still, Goddess owns everything it presents, which is a high compliment for a debut. It asks listeners to love it, and its creator, for both flaws and attributes. Fortunately, the latter far outweigh the former, announcing Banks as a well-rounded songwriter and singer that deserves a lot of the attention she has earned so early in her career. Even with the mystery solved, the draw is still strong enough to keep tuning in to see what happens next.

Essential Tracks: “Brain”, “This Is What It Feels Like”, and “You Should Know Where I’m Coming From”