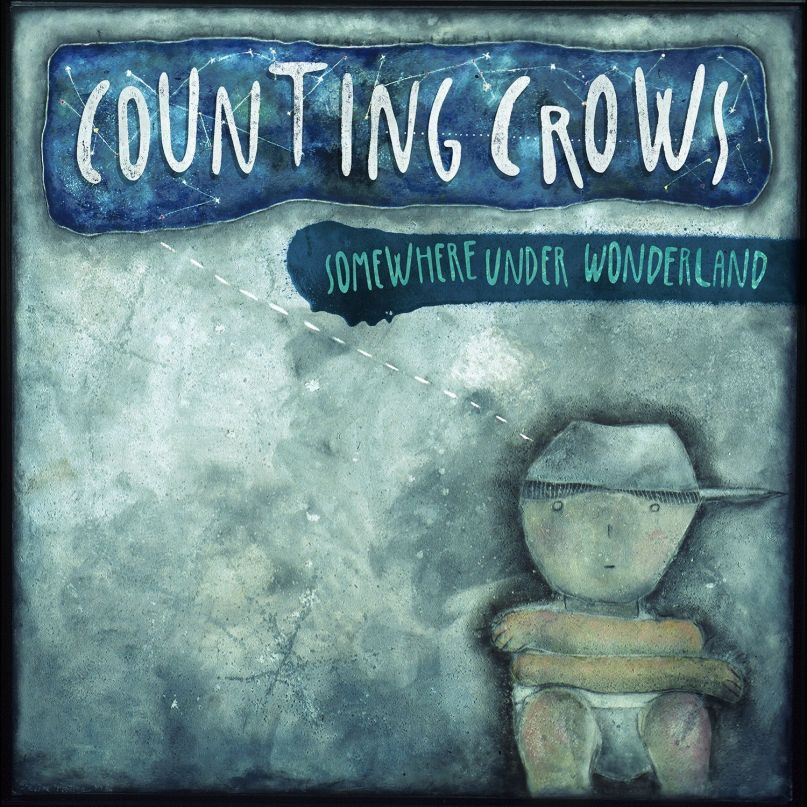 If you ask Counting Crows frontman Adam Duritz what moment catapulted his band to stardom in the mid-‘90s, he won’t mention “stumbling through the barrio” on runaway single “Mr. Jones”. Instead, he’ll tell you the sea change began with a performance of “Round Here” on Saturday Night Live. “‘Round Here’ sums up Counting Crows,” the songwriter explains. “It’s what makes us different from everybody else.” After listening to “Palisades Park”, the eight-minute opener and lead single off the Crows’ seventh studio album, Somewhere Under Wonderland, it feels natural to drift back to “Round Here”, that drawn-out, initial breath off the band’s debut, August and Everything After. The two songs bear little resemblance to one another, but like “Round Here”, which ushered listeners into Duritz’s headspace for the first time through a long, dark patch of silence mercifully punctured by a guitar illuminating droplets of autumn fog, “Palisades Park” acts as a gateway, summoning back through memories via a meandering boardwalk trumpet. And those who tag along through Somewhere Under Wonderland won’t regret the journey.

“My life just careens through a pinball machine/ I could do so much better, but I can’t get off the tilt,” says a still relatively innocent Andy, the troubled friend of Duritz’s “Palisades Park” protagonist. The song recalls the pair’s adolescent escapades and gradual drifting apart, the friendship, like the bulldozed amusement park they once loved, now only a flickering memory that surfaces during the protagonist’s quieter moments. It’s the richest, most genuine type of nostalgia — ricocheting between sadness, jubilation, and confusion in the instant — tinged with loss (of youth, friendship, and innocence), but also imbued with the understanding that “it’s a long life full of long nights” that bring a variety of experiences with them. Life goes on, circumstances change, and, yes, we hurt. But we can still “carry that spark from Palisades Park” if we so choose.

That perspective — what Sherwood Anderson once called “the thing that makes the mature life of men and women in the modern world possible” in his classic short story “Sophistication” — informs Counting Crows as they find their footing as a middle-aged band. Sure, Duritz’s normal hang-ups still emerge, but they come in a warmer, more emotionally rounded context these days, nothing like the desperate, Bellow-esque yearning on August or Recovering the Satellites’ agitated disconnect. “I live alone/ But I am hungry for affection/ I just struggle with connection,” reads like a typical Duritz sentiment but gets rendered in life-affirming fashion on “Earthquake Driver”, as he pops off and runs words together atop an upbeat melody, handclap-style percussion, and lighthearted harmonies. Other playful lyrical change-ups include name-dropping Alex Chilton and Victor Frankenstein side by side (“Elvis Went to Hollywood”); collage-like rhyming “Snowman, scarecrow, John Doe, buffalo” (“Scarecrow”); cataloging “colored lights and birthday cakes, candle wax on paper plates” (“God of Ocean Tides”); and tinkering linguistically on a line like “I cigarette the winter, and then I Fred Astaire my way down 7th Street” (“John Appleseed’s Lament”). These are just a small sampling of the various techniques Duritz uses to convey emotion without needing to resort to strict narratives, journal-like confessions, or out-on-a-ledge pleas.

The band find that same type of balance in the album’s musical direction, a colorful and emotionally rich palette of sounds that combines past recording styles, flavors from covers album Underwater Sunshine, and the spontaneous spirit of their live performances. “Elvis Went to Hollywood” (which sounds like a mingling between old tracks “Einstein on the Beach (For an Eggman)” and “New Frontier”) and “John Appleseed’s Lament” scale back the muscle and flesh out the character of the full-throttle guitar tracks from Saturday Nights & Sunday Mornings that left a bad aftertaste come Monday. The rambling, piano-plinking “Cover Up the Sun” and Southern rock-indebted “Scarecrow” both venture further into that country rock territory the Crows have always nestled up against, highlighting the impeccable harmonies that dance around and underpin Duritz’s unpredictable delivery throughout the record.

Some Counting Crows fans might not take to the album; they’ll still want their dreadlocked frontman tortured and mopey with arrangements to match. But as I listen to the album’s building, piano-led closer, “Possibility Days”, I take some comfort in hearing the line “The best part of a bad day is knowing it’s OK,” even though the relationship in question ends up falling apart. It sounds like Duritz and the Crows, like all of us, are hopefully finding a way to settle in for that “long life full of long nights.” And why shouldn’t we all root for that?