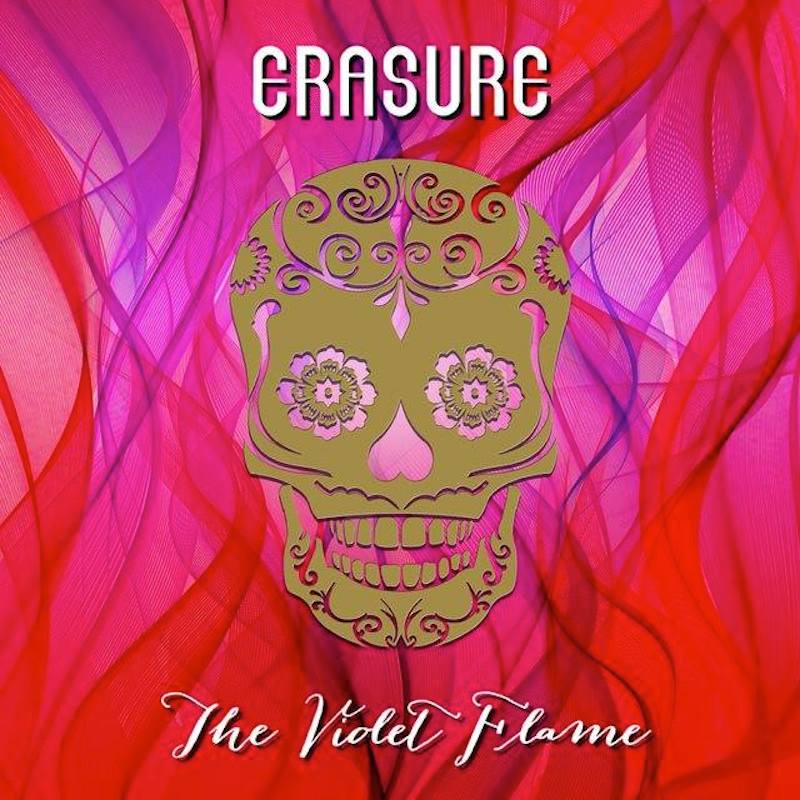 I must admit I was surprised to find out that The Violet Flame was the 16th studio album from UK electropop duo Erasure in a recording career approaching 30 years. I associate the band with its heyday of the mid-’80s to early ’90s, when the hits came thick and fast and singer Andy Bell’s “proud to be gay” stance readily fueled headlines. In truth, I hadn’t heard that much from Erasure over the past decade or so. However big bands become, they can quickly take the down elevator for all kinds of reasons, from simply taking a hiatus to putting out a sub-par album or two. Most will stay in the spotlight for true fans, but for the wider listening public, it doesn’t take much to slip off the radar.

Listening to The Violet Flame is like taking a step back to the heady, euphoric dance floors of the late ’80s. The music is familiar enough to wrap its arms around you, with Bell’s crystalline vocals ringing out over Vince Clarke’s bright melodies. The album has a lightness of touch that at times makes you wish for more bass to add weight, like on the taster single “Elevation”. But, many of these songs are infectiously danceable and invariably uptempo. The duo’s last record, 2013’s Snow Globe, was an odd mishmash of Christmas covers and seasonally flavored originals. This new one charts a clearer course, ringing with optimism and zest for life while putting aside regret. “It’s all about hope, forgiveness, being given a new chance, and the world being your oyster,” as Bell puts it.

The trance-like opener, “Dead of Night”, doesn’t quite strike the celebratory tone of the majority of the album. “In the dead of the night you are haunted by the wanting, never satisfied,” Bell sings over Clarke’s circular groove. Exorcised of doubt and deceit, the anthemic “Elevation” that follows aims higher, but there’s a strong sense of déjà vu about both its melodies and sentiments. Bell’s avowal that “the love gets higher” is repeated ad nauseam during a lengthy coda, yet the song itself is comparatively grounded. The urgent “Reason” is similarly formulaic but is raised up by its spiraling synths and an eager singalong chorus.

Oddly for a record that entices hands-in-the-air dancing, it’s the slower ballad “Be the One” that really engages with its sincere simplicity. “We will walk to the end of time/ To the edge of the world and sky/ Come and stand in the setting sun/ Be the one,” choruses Bell. Fresh, airy, and believable, the song is lifted by Clarke’s soothing synth lines.

The other track that stands out is “Paradise”, which boasts echoes of synth-pioneering producer Giorgio Moroder in its arpeggios and driving rhythms. It follows the reflective “Smoke and Mirrors”, in which Bell channels grief surrounding the death of his former partner and manager, Paul Hickey: “I’d give my all to hold you once again.” “Paradise” then turns the mood, an inspiring and cathartic invitation to “make your own paradise.”

At just 10 songs, The Violet Flame is extinguished quite early. It’s a mature work that fans will love, but it might not be strong enough to lift Erasure back into the spotlight. Bell’s voice is undiminished by age and arguably better than ever, while Clarke’s command of melody and texture remains complete. In the same way that UK electropop notables The Pet Shop Boys and OMD boast sounds that are distinctively theirs, Erasure has its own hallmark, which it faithfully reproduces on this record. It’s an album you can approach and recognize even if you haven’t kept up with the recent catalog, but it might not set your heart alight.

Essential Tracks: “Be the One”, “Paradise”