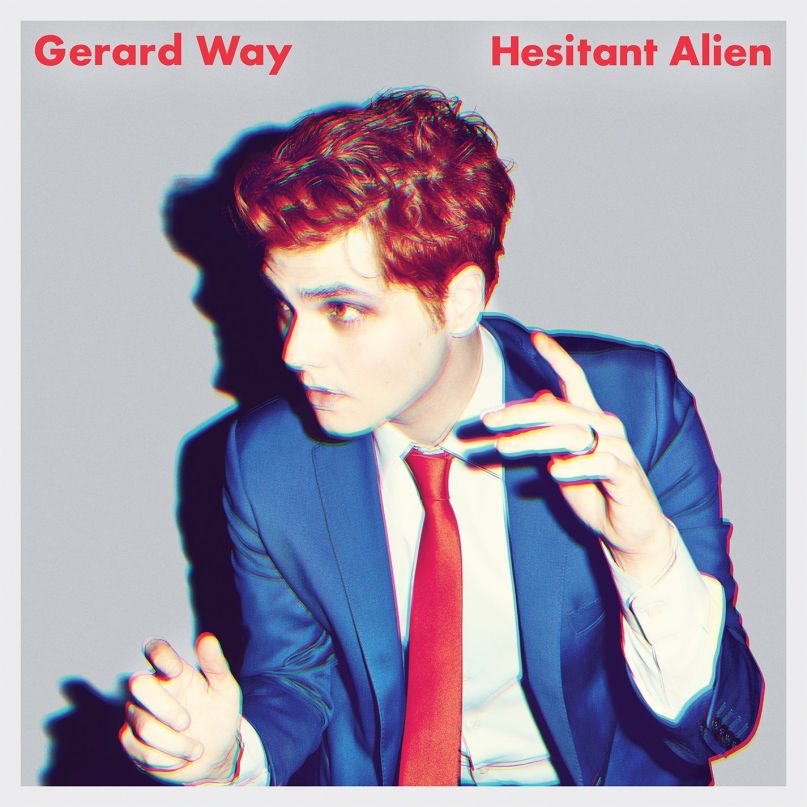 My Chemical Romance announced their breakup in March 2013, but one could sense that the end was near as early as 2010’s Danger Days: The True Lives of the Fabulous Killjoys. A concept album in the same mold as the band’s platinum-selling The Black Parade, Danger Days seemed a tad procedural, as if frontman Gerard Way and his bandmates had run out of ways to top themselves. And so they adopted hamfisted alter-egos like “Party Poison” and named their lead single “Na Na Na (Na Na Na Na Na Na Na Na Na)”, which reads less like a title and more like the sound of a creative engine chugging to a stop.

If Gerard Way’s new solo album, Hesitant Alien, is any indication, the pasty-skinned singer merely needed a change of scenery to get that engine up and running again. In fact, to hear Way gleefully rip through such sunshiny genres as glam rock and Britpop is to realize that he might have been wrongfully cast as emo’s poster boy in the first place. Even as far back as Three Cheers for Sweet Revenge, there was always something manically joyful in his voice, as if a part of him simply refused to take all that macabre shit too seriously. It’s only now that he’s shed the MCR label and all of its mall-goth trappings that Way is free to bring that joy to the forefront.

He’s also free to do pretty much whatever else he wants, and one of his first acts of liberty is to break out the box of fuzz pedals and set them all to 10. Opener “Bureau” is a sludgy call to arms that doesn’t particularly go anywhere, but nonetheless manages to evoke Suede, Smashing Pumpkins, and several other ‘90s influences that Way continues to mine throughout the album. The track fades out to the sound of a dial tone, as if he’s asking his listeners to pick up the damn phone and hear what his new voice has to say.

Those who answer the call are rewarded with the anthem “Action Cat”, a song that filters the theatrics of The Black Parade through a curtain of fuzzed-out power pop. The results are as powerful as they are conventional; we’ve heard this tune a million times before, but there’s an immediacy to Way’s delivery that tricks his audience into thinking he’s communicating something vital in the throwaway line of the coda: “Do you miss me? ‘Cause I miss you.”

As it progresses through the swinging verses of “No Shows” and the piano-tinged ballad “Brother”, Hesitant Alien begins to feel more and more like a coming-of-age statement — an admittedly odd thing to say, considering Way is 37 years old and has been pouring his heart out onstage for more than a third of those years. But, it sounds as if Way is finally getting to do exactly what he’s interested in, and in doing so, he’s finally finding ways to relate to an audience roughly his own age.

All of this is to say that existing fans of My Chemical Romance — generally a younger set for whom Green Day’s American Idiot constitutes an ancient text — will probably not be thrilled with Way’s unabashedly melodic reinvention. Nor will they be pleased with the de-emphasis of lyrical content made necessary by Way’s fuzz-box vocals; there are vast stretches of this album when it’s really unclear what this guy is saying. Now, someone raised on Psychocandy will listen to Hesitant Alien and hear crisp, bubbly production, but that only serves to underscore the generational gap that Way is attempting to cross. It’s a late-stage career shift that’s worthy of applause, though I’m not sure how successful it can hope to be from a commercial standpoint.

Despite of (or, more likely, because of) its tendency to take risks, Hesitant Alien is not without its share of flaws. Most of these are saved for the album’s lackluster midsection, starting with “Brother”, a song that saps the momentum created by the pair of barnstormers that precede it. The filthy bass line of “Zero Zero” restores some of the energy that’s lacking, but it’s also a moment that feels out of place considering what precedes it, almost as if Way is throwing a bone to listeners more interested in banging their head than tapping their feet. Things pick up again in earnest with “Get the Gang Together”, which injects the tail end of the album with a necessary dose of glam rock sleaze.

Whether all of these tracks add up to a cohesive statement is debatable, and it’s a shame that the album drops off so noticeably after such a promising start. But the good news is that Way has produced something infinitely more interesting than whatever the next My Chemical Romance rock opera might have been. Once he settles into his new digs and starts to experiment with his Anglocentric influences more, he might stumble upon something that forces people to pay attention. For now, he’ll have to convince adult-minded lovers of pop that a former emo superstar has more in his toolbox than hair dye and eyeliner. And in that regard, Hesitant Alien is a worthy case in point.

Essential Tracks: “Action Cat”, “No Shows”, and “Get the Gang Together”