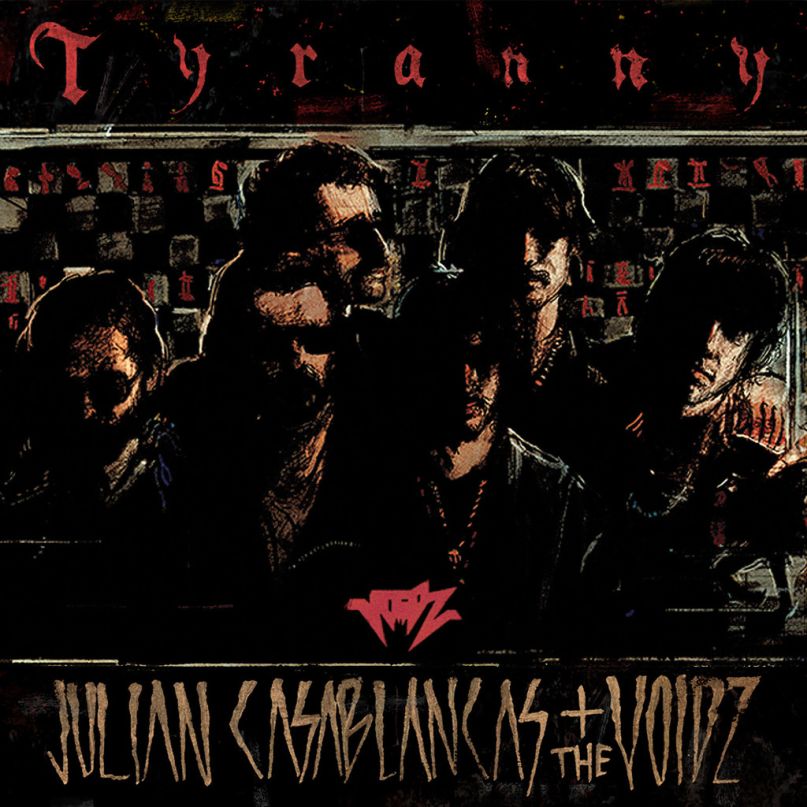 “This is not for everybody, this is for nobody,” Julian Casablancas sings on “Take Me in Your Army”, the opening track off The Voidz’ curious debut album, Tyranny. Is it a warning, a declaration, or both? At its best, Casablancas’ latest foray is an adventurous excursion, the guy’s Metal Machine Music, scratching at the ears more often than it soothes them. On the other hand, it might be the gnarliest drivel he’s put out yet.

Altogether, Tyranny sounds like a haunted NES system, screeching with 8-bit rhythms that hiccup sentient messages and falsetto lounge poetry. Those looking for a follow-up to 2009’s highly underrated Phrazes for the Young, look elsewhere. This isn’t for you. Then again, it’s “for nobody,” an idea that proves intoxicating the more it’s considered. Who the hell is this for?

For Casablancas, perhaps. Earlier this year, he called it a “protest record” in a bizarre, eight-minute video titled “Can I VHS you?”, which also saw guitarist Jeramy Gritter describing the album as the “music of our time.” They’re not wrong. Tyranny does wax over certain tropes and vibes familiarized by, say, Animal Collective or Ty Segall or Deerhunter. It’s just patched together like an abrasive cassette mixtape that’s seen years in a filthy NYC gutter. Somehow, Casablancas has out-weirded the weird.

And yet, amidst all the chaos, Casablancas sounds strangely comfortable. On “Human Sadness”, the 11-minute single, he oscillates between the intimacy of a cabaret singer and the thunder of a tortured arena rocker. It’s a spiraling existential anthem bound together by moments, stories, and personal meditations with the DNA of The Strokes, Scott Walker, and even Kanye West. “To be is not to be, to be is not the way to be,” he concludes, sounding defeated and eerily complacent.

He probably is these days. Think about it: He’s running his own label, Cult Records; he completed his contract with RCA last year; and all of those expectations from the early 2000s have slimmed down exponentially. But really, it’s about the people he’s with on this record, which explains the addition of “+ Voidz.” In a recent interview with French publication Les Inrocks, Casablancas discussed his close-knit relationship with his new outfit, saying:

It took me some time to find people who I am exactly on the same wavelength, humanly, musically. We feel strong, like a gang with The Voidz … The first time we cruised together in New York at 3 in the morning I looked at us and I thought, “Damn, I would not cross these guys -There at night in an alley” (laughs) … We take care of each other, we are brothers.

Such a bond speaks well to their vision forTyranny. Together, they’re the anti-Strokes: a ragtag team of would-be garage rock heroes more invested in volume than any sort of style or finesse. This isn’t just an abrasive record, but a loud one, too. Gritter and Amir Yaghmai are unforgiving at the six-string, tap dancing over a sea of flagrant noise made somewhat intelligible by keyboardist Jeff Kite and bassist Jake Bercovic and further shaped by Casablancas. How Alex Carapetis ever found a way to follow on percussion speaks volumes to his abilities.

A lot of the clutter stems from the production, which should prove polarizing to Casablancas’ fans. Whereas Phrazes was a slick indie pop album thanks to Jason Lader (Maroon 5, Rilo Kiley) and Mike Mogis (Bright Eyes, The Faint), Tyranny is a grimy bedroom rock recording, as if producer Shawn Everett (Weezer, Pete Yorn) tossed a couple of mics behind a radioactive television set. Zero in on the guitars for “M.utually A.ssured D.estruction”: They sound like lightsabers. Revisit the drums on “Father Electricity”: Are those paint cans? How about that optimistic surprise of a closer, “Off to War…”? It’s an analog paradise in technicolor.

This rugged DIY nature, though, falls in line with the band’s identity. From the get-go, The Voidz smacked off our Wayfarers as this off-kilter neighborhood menace, similar to Chuck Palahniuk’s Project Mayhem. They waved hello through a series of VHS tapes, their festival appearances were scrappy, and they’re selling the album for three dollars with the choice of getting it packaged with a lighter. Casablancas calls it “political,” but in a way, it’s a very populist record, the sort of LP that makes you think anything’s possible for anyone with half-baked ideas.

Not that these songs are half-baked. On first listen, it would appear that Casablancas is out of his mind, but really, he’s working with his most original material in years. The difference is that you have to mine the hooks and melodies. “Johan Von Bronx” hugs you with the album’s strongest chorus; “Where No Eagles Fly” pulls from late ’70s Manchester; “Business Dog” is the blood-in-teeth follow-up to “Heart in a Cage”; and “Dare I Care” is classic Casablancas with a squeeze of Latin flavor. It’s not as if he’s derailing from whatever sound he’s soaked himself in over the years — he’s just not making it easy for anyone.

Lyrically, he’s just as formidable. Over 12 tracks, Casablancas finds a middle ground somewhere between the poetry of Jim Morrison and Cedric Bixler-Zavala’s acidic storytelling. These are political songs, sure, but for a politics of the mind. They’re internalized parables crisscrossed with scattered self-deprecation and dialogue. On the very hazy “Xerox”, he sings, “Tomorrow is laughing, money breeds tyranny,” before admitting: “I’m the worst, I’m the worst.” It’s strange, but as he later states on the aptly titled “Nintendo Blood”, “They like to change the rules as they go.”

That lyric says everything you need to know about the album: an angry, lo-fi experiment that bends, stretches, and contorts its own limitations. While it would be interesting to hear the album with sharper production and a little more focus, that would ultimately be its very end. This one thrives on the fringe; it’s not interested in meeting in the middle. Take it or leave it.