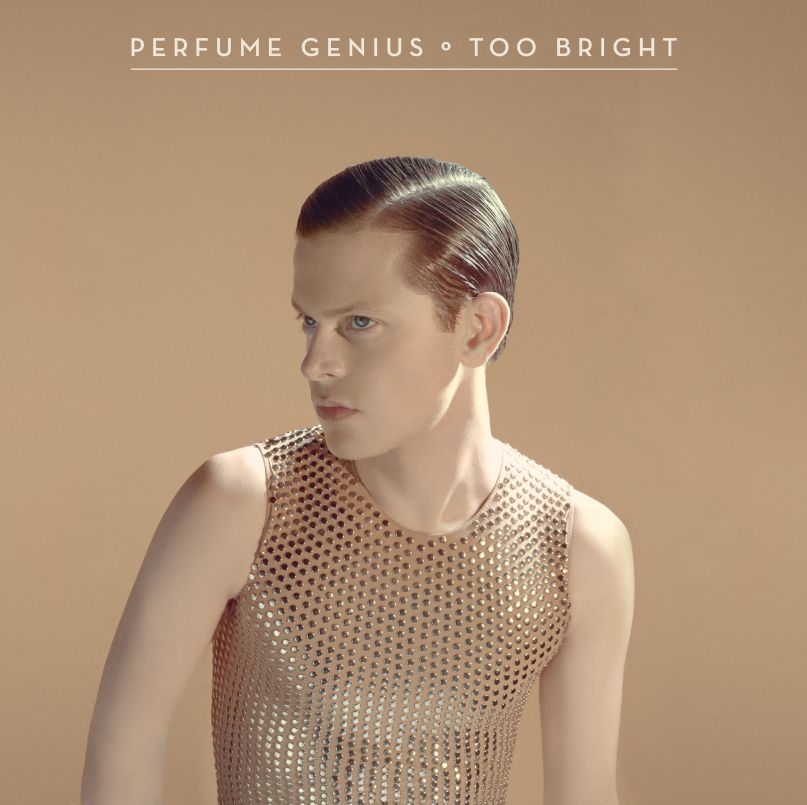 “If I could just be a lump, or a mist of smoke with eyes, I probably would be that,” Mike Hadreas recently told Pitchfork. “Just an energy, moving around.” His third record as Perfume Genius, Too Bright, doesn’t quite resonate with the concept of shifting energy, nor is it in any way “too” bright. But the title’s cutesy reinforcement of the word “genius” is an exciting indication of Hadreas’ burgeoning musical confidence.

Perfume Genius’ previous releases, Learning and Put Your Back N 2 It, shared a mood, despairing motifs, and concentrated piano melodies, but the latter upgraded these components with refined production and a new sense of honesty. A raw and gorgeous moment on the second album’s “Dark Parts” has Hadreas taking his mother’s abuse as “dark parts” into his heart, reassuring that “he’ll never break you, baby.” Other lines like “I will shed no tear” on “No Tear”, “no violence, no matter how bad, can darken the heart” on “Normal Song”, and the emphatic “hold you close to me with no hesitating” on “All Waters” speak to Hadreas’ bold courage in an otherwise tragic landscape. He plays up a similar boldness on Too Bright, too, but with an entirely new intensity, a fresh collection of instruments, and a certain spookiness that he highlights by way of experimentation.

“Queen”, the album’s lead single, epitomizes this transformation in the clearest ways: loud vocals, louder drums, new synth twinkles, and a recognizable chorus. The line “No family is safe when I sashay” feels iconic to both Perfume Genius and Too Bright by now, even though the single came into the world only two months ago. Repositioning himself with the power of a “queen” in the song’s video, Hadreas breaks gender conventions while toying with suited men with plates of jumbo shrimp. He’s not asking for anyone’s approval anymore, no matter what the shyness and vulnerability of his past two records might insinuate. Here, he commands total authority on sexuality and gender, as well as heavy themes of trauma and love.

Too Bright engages openly with new motifs, too, specifically the human body. Hadreas’ struggle with Crohn’s disease presents itself as an easy source for this new fixation, but the music gets at something even deeper. In an unnaturally low voice on “My Body”, Hadreas moans alongside screeching guitar, “I wear my body like a rotted peach/ You can have it if you can handle the stink.” The uptempo, clapping “Longpig”, whose name comes from a cryptic slang term for human flesh, also toys with something gruesome and visceral. Is Hadreas considering cannibalism here? Or is he urging on the cannibals, waiting to be eaten?

Despite these new strides, the record’s not without a sense of familiarity. Too Bright splits itself almost equally between dense, newly confident songs and quieter tracks with piano, elevated vocals, and ethereal synth dressing. What’s missing almost completely, though, is the straightforwardness of Hadreas’s earlier work. “Queen” is the only track with a core that can be immediately grasped; elsewhere, Hadreas makes a valiant effort to heighten the importance of texture and take some weight off his lyrics. It’s quite a risk considering the success of his earlier work, but it turns out to be worth taking.

In the video for “Grid”, Hadreas is hauled around by menacing silver spirits, all the while maintaining an intense, pleasured gaze into the camera. “There is no angel above the grid,” he sings as the demons tug on him. In a statement accompanying the video, he addresses the darkness personified by these faceless silver figures: “Giving it a voice is an attempt at freeing it so it can potentially dissipate.” Here, Hadreas rectifies the schism between his self-deprecation and newfound artistic aplomb. The bold new sounds on Too Bright are a playground for his insecurities to wither in the light.

Despite its heightened complexity, Too Bright still fosters an intelligible world where Hadreas can bridge the distance between his vulnerability and self-assuredness. “Heart long desperate for just a little bit,” he sings on the album’s closer, “All Along”. “I don’t need you to understand,” he goes on. “I need you to listen.” How could you refuse?

Essential Tracks: “Queen”, “Grid”, and “All Along”