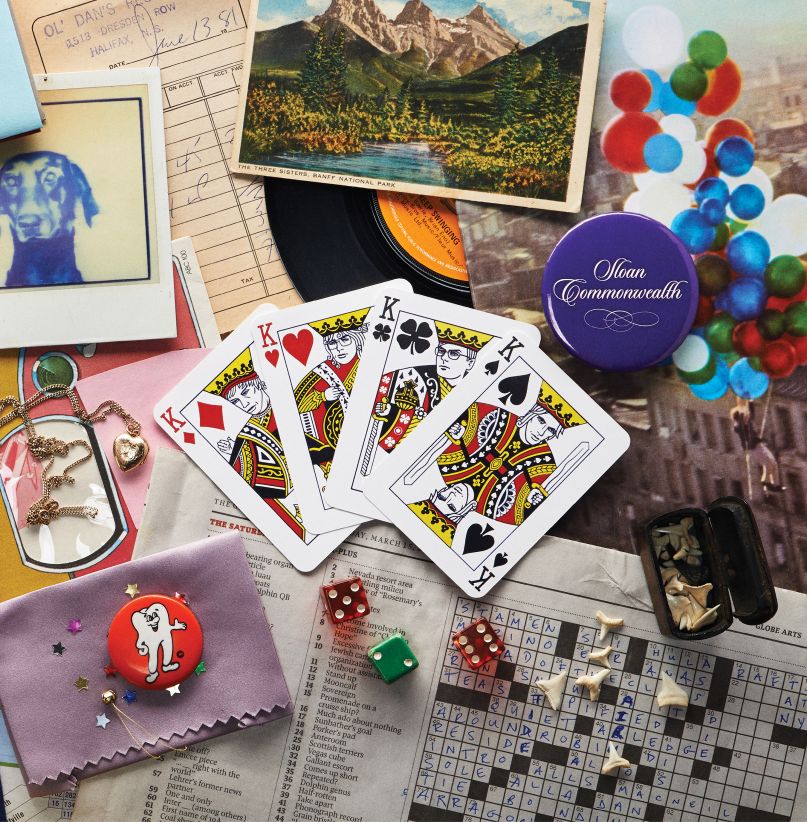 Sloan, as an entity, is the ultimate example of delivering on the premise and promise of The Beatles: four members that take turns leading the group with their own compositions, trading off lead vocals, and, occasionally, when more than one member is at the helm of a song, they reach a magical place that is greater than the sum of the individual parts. As an added bonus, Sloan happens to be a consistently great rock group, often harkening back to the “classic rock” days of yore, while remaining undeniably Sloan-esque.

Of course, there are huge differences between Sloan and The Beatles. The Fab Four took the world by storm, whereas Sloan is adored by their homeland of Canada and small pockets of hardcore fans throughout the rest of the world. At the peak of their popularity, The Beatles toured for only three years, while Sloan have toured hard and heavy for years. And, of course, while the lads from Liverpool worked collaboratively for roughly eight years, Jay Ferguson, Chris Murphy, Patrick Pentland, and Andrew Scott have produced records together for well over 20 years now, only getting better and more refined with each release.

Despite their apparent harmony, many fans have pondered when the members of Sloan would eventually get around to releasing solo albums. The members haven’t really seen a need for that, though. As Sloan seems to work as a democracy, each member seems to get to follow his muse anyways. Truth be told, there isn’t really a successful precedent for such a move in rock and roll. Those solo albums by Kiss certainly spring to mind, and while Yes’ run of solo albums in the ‘70s produced some real gems, they could have been more succinctly distilled into one highlight-laden album.

That brings us to Commonwealth, Sloan’s 11th original full-length, a double-LP in which each side of wax contains a song suite led and directed by one member. Is it successful? That’s a complicated question to answer, as giving each member roughly 16 minutes to act as bandleader is anathema to what has made Sloan albums so compelling in the past.

Think back to the run on side B of 1999’s Between the Bridges for reference: Ferguson’s sunshine pop nugget “Waiting for Slow Songs” would be countered by the riff rock by way of Joy Division found in Pentland’s “Losing California”. Those themes would intersect in Murphy’s piano-led wordplay anthem “The Marquee & the Moon”. Giving each band member an entire album side to play with cuts the cord on what a Sloan album is, and, in effect, changes the chemical makeup of the band entirely.

It’s fitting that the first side of the album — led by Ferguson — is the most undeniably “Sloan” portion of the package. Picking up right where his contributions to 2011’s The Double Cross left off; he not only lends some continuity to the Sloan saga with more of his too-late-for-AM-radio power pop, but also introduces the “card suit” motif utilized throughout the album, each member’s side signified by a diamond, a shamrock, a heart, or a spade.

The heart side represents a turn for Murphy to reassume the leadership role that was evident in Sloan’s earliest records, but it’s also a testament to how far he’s come as a songwriter in those 20 years. Oh sure, the puns, wordplay, and pop culture commentary is still there, but there’s a mellow sophistication evident in his effortless melodies that’s a far cry from his distortion-drenched early days. Plus, in tracks like “So Far So Good”, you get lyrical gems like “Don’t be surprised when we elect another liar/ Did you learn nothing from five seasons of The Wire?”

Pentland’s side (shamrock) begins with a few nearly interchangeable stabs at ‘80s Camaro rock, his specialty in the last decade. But it’s the third of his songs, “What’s Inside”, that really shines. It’s an epic piece, resplendent with lots of out-of-phase instrumentation and a simple, pounding drumbeat, the track possibly the sleeper hit of the album. It’s a problematic side in total — those experiments don’t flow well next to the obvious pub rock of lead single “Keep Swinging (Downtown)” — but it’s also telling. If Pentland is the most consistently predictable songwriter in Sloan, where exactly is the album heading as a whole?

By the time Scott’s spade side rolls around — and I’m hoping that “spade” is a reference to a line in his 1998 composition “Seems So Heavy” — all bets are off. It’s a single track titled “Forty-Eight Portraits”, and it opens with nearly three minutes of barking dogs, seemingly disconnected percussion, and free-form piano. These disparate sounds eventually come together in an track that borrows an entire verse from 1999’s “Delivering Maybes” and recycles the piano outro from 1996’s “A Side Wins”. These nods are made more perplexing by the repeated hook of “What it does is unexplainable/ What it is is unsustainable.” Factor in Murphy occasionally chiming in on lead vocals and harmony, and Scott’s intentions remain unclear. The track is the closer, but there’s nowhere else it could have been placed on the album that made any sense at all. The song plays as if it’s Sloan’s swan song, and it’s certainly effective enough to make longtime fans wonder if lines like “Let’s leave well enough alone” are a wave goodbye.

If Commonwealth were the end of Sloan and the beginning of four solo careers, they’ve built a fitting and emotionally stirring Dear John letter to their audience. On the other hand, if Commonwealth is merely just another Sloan album with a different approach, it runs the risk of later seeming highly out of place in their discography. What will ultimately decide how history and fans remember Commonwealth is what Sloan does next. It’s either the most self-referential album they’ve ever made, coated in an air of finality, or it’s the first step into an incredibly awkward transitional phase. Commonwealth could be Sloan’s own take on The White Album, but it feels more like their answer to Abbey Road.

Essential Tracks: “So Far, So Good”, “What’s Inside”, and “Forty-Eight Portraits”