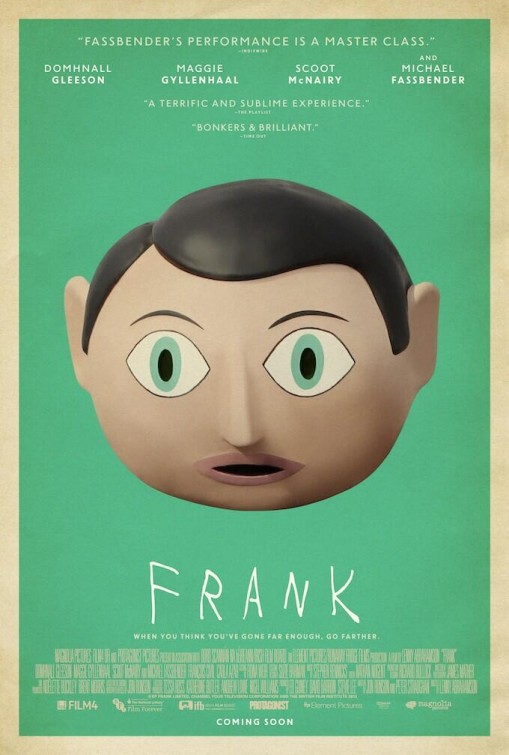 Frank (Michael Fassbender, but you’d almost never know) sports a papier–mâché head. It eerily resembles those drive-thru microphones shaped like cartoons, all born of the fiberglass Big Boy statue. Frank never takes the head off. He refuses. He “has a certificate.” It’s his shield, his identity, his gimmick. His bandmates, the audiences he plays for, everyone really seems to dig on the helmet. It adds a level of mystery, maybe even insanity. Or it’s just some dumb idea. But the question remains: why does Frank wear a cartoonish head? That question could be asked of every modern pop star’s branding. Yo Miley, what gives with the wrecking ball and tongue lashing? Ke$ha, thesis on your gold tooth, please? Hey Biebs, was the boy prince petulance always there, or did fame let it loose?

That very concept leads to another even loftier question. How does one make it big and get noticed as a musician today? Frank presents possible answers in Frank. Have a gimmick. Be mediocre. Have a need for psychiatric help. That’s not condemnation, but rather a hypothesis. At least that’s Frank’s hypothesis.

Frank is a sharp, mean-spirited satire, with a lot to say about today’s music industry. Unlike the stupid-hearted Begin Again or the nostalgia bomb Lucky Them, Frank has something interesting to say. Using black comedy and light fantasy as its angle, Frank has a thrilling, love-hate relationship with music. Music can be divine, inspired, and truly innovative listening for the masses. But that just seems too damn rare, and Frank acknowledges that.

Back to that bulbous head. Frank is the enigmatic lead singer of an unknown band, Soronprfb (no normal human being comes up with words like that). If pressed for comparison, the band sounds like Tame Impala, with shades of Animal Collective and My Bloody Valentine – a spaced-out, post-grunge pastiche. Case in point, Soronprfb’s first song in the movie is called “Cinger Crouton”. Get it?

Enter Domhnall Gleeson as Jon, a cubicle jockey who daydreams about being a musician. However, the best he can do lyrically is write lousy songs about his surroundings. Suburbs and ladies. What startling stuff, Jon! Jon is the very definition of mediocrity. But Frank comes knocking when Jon stumbles upon the band’s keyboard player attempting suicide in the ocean. Jon watches in still terror but is awkwardly asked by Don (Scoot McNairy), the band’s engineer and former keyboardist, to fill in. Everything’s coming up, Jon! It’s like a musical fairy tale. What Jon, a boring, Twitter-fried lackey (he actually says things like #yummm), doesn’t realize is that he’s about to play in Frank’s world.

Jon shows up and gets surprised by some nut in a big head mask. The show stinks and is cut short due to temperamental and technical difficulties. Yet, Jon is fascinated by the one-of-a-kind Frank. Frank, as well, sees promise in Jon. Jon joins the band and documents the whole experience, as Frank becomes a dizzying trip. Jon nearly torpedoes Frank’s gifts with his own bland tastes. They earn a trip to South by Southwest on the curiosity surrounding Frank’s head alone. Throw in a mean Maggie Gyllenhaal, coffee can ashes, and mental breakdowns, all in the middle of the night. Dat’s show business!

Frank works for its sense of humor and sense of melancholy. Fassbender, in a big-time performance, holds the film together with merely his enthusiastic voice. Underneath the eerily white eyes and paint-covered bandages, you can feel Fassbender crafting a strange soul, letting you into his madness at just the right pace. Ignore the head, ignore the gag about Frank describing his facial expressions under the mask, and you see a man who can really sell his made persona and pain.

Frank picks at a twill on a chair and is immediately able to write a fairly decent tune about the life of the twill with his guitar. Jon watches, agog, a little jealous of Frank’s gift. It’s easy for Frank to pour his heart and soul into music and make magic. For oddballs like him, it usually always is. But that oddity comes at a cost. Frank wants fame, love, and acceptance, which in reality is going to be looked at as insanity. Frank may have jarring tone shifts, but Fassbender makes the message loud, clear, and catchy: music, really good music, is for the mentally insane. At least he’s approaching Frank with something more fascinating and intense than crashing an ATV in Canada (that’s a Bieber jab, just in case this is read several months from now).

It should be noted that the character Frank is an interpretation of the real-life Frank Sidebottom, a character from Chris Seivey, an English musician and comedian. The head in Frank is modeled after Sidebottom. It’s also an amalgamation of Captain Beefheart and Daniel Johnston. Sidebottom achieved cult status over the last 30 years, and people still scratch their heads over just what was going on inside that head of his.

Free CBD Gift When You Buy Any of Our CBD Products
This Network Saved the Charlie Brown Holiday Specials
The New Star Wars Holiday Special Is Streaming Here
Get a Free Thanksgiving Gift with Every T-Shirt or Mask
Previous Story
Film Review: To Be Takei
Next Story
Album Review: Anthony D’Amato – The Shipwreck from the Shore
Popular
More Stories
[fu-upload-form form_layout="media" title="Submit Your Photo"][input type="hidden" name="ugc" value="1"][/fu-upload-form]