Film Review: Hector and The Search for Happiness 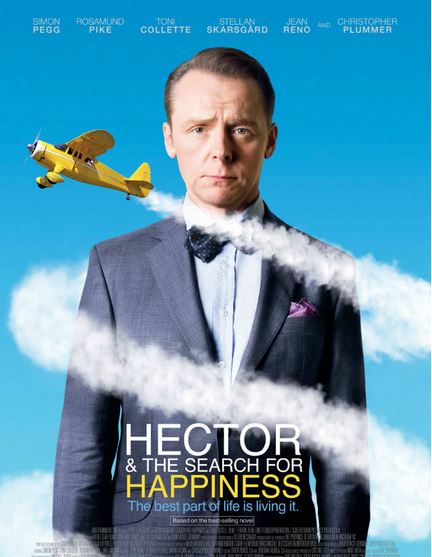 Say Hector and the Search for Happiness out loud. Have you suddenly been tickled with an icky, schmaltzy feeling? For many a filmgoer, mushy chick flicks and “feel-good” films are more cringe-inducing than a Saw-level blood and guts fest. This dichotomy begs for the question to be asked: When did sentimentality get such a bad rap? And is it deserved?

Unfortunately, this well-meaning British comedy-drama from Shaun of the Dead’s Simon Pegg does not resurrect the notion that sentimental films can be good films, too (for example, E.T., Dead Poets Society, Terms of Endearment, heck, Rocky – all totally sappy and great). The paradox here is that Hector’s tender emotional moments are the ones that ring true, but there are fewer of those than one might expect. Instead we get lots of self-help platitudes — “Making comparisons can spoil your happiness”; “Happiness is being loved for who you are” — on a travelogue romp that either soars or stumbles, but mostly stumbles.

The trailer makes it look like a kid’s movie (with a PG-13 penis joke tacked on to the end), but in fact the R rating is justified. Violence, dark humor, swear words, and sexcapades are all part of the Hector experience, even if its sunshine-yellow motifs and cute, animated cutaways suggest an extension of Curious George. In look and feel, Hector and the Search for Happiness is a cross between The Secret Life of Walter Mitty and Eat Pray Love and is only marginally better than those films.

Pegg stars as Hector, a London-based psychiatrist who has begun to resent treating his patients for first world problems. He realizes he’s not making them any happier by, you know, doodling with a bored look on his face or flipping out on them, so he decides to travel to China, Africa, and America to discover “what makes people happy.” And yes, even with his posh job, fancy flat, and gorgeous, supportive girlfriend Clara (Rosamund Pike), Hector wonders if he is truly happy himself. So, basically, this trip is all about him.

Adapted from psychiatrist François Lelord’s novel of the same name, Hector is at its best when the protagonist is having a sincere heart-to-heart with another person, and not just for personal gain. The three best scenes in the film — Hector comforting a terminally ill woman on a plane; Hector wondering “what might have been” and getting a furious reality check from his ex (Toni Collette, pitch-perfect as always); and Hector breaking down to Clara at the climax — all share one essential aspect in common: generosity. The moments still get milked for platitudes (the sick woman’s is “Listening is loving”), but they are rooted in strong, generous performances and a surprising dramatic range from Pegg that is impressive to behold.

Of course, everyone has a threshold where hokeyness is concerned; I didn’t reach mine until the final shot. And wow, is it cheesy. It may be the cheesiest closer to film that I’ve ever seen, and that’s including freeze frames. But I digress.

Director Peter Chelsom, who also directed Hannah Montana: The Movie, paints in broad strokes. The broadest of all is his depiction of “Africa” with no stereotype left unturned, from disease-ridden children to happy poor people to gangbangers that kidnap Hector after finding him in the back of the cab they just hijacked. Also, Hector says he is traveling to “Africa,” no country specified, whereas the cities of Hong Kong and Los Angeles are explicitly stated. Seriously, movies: Stop doing this. Africa is a continent; pick a country at least.

As written, Hector is kind of a twit. But Pegg, sparkplug that he is, manages to make the character somewhat likable, even after he cheats on Clara within hours of his arrival in Hong Kong. Post-bedding a mysterious Chinese woman named Ying Li, Hector notes in the journal that Clara gave him, “Happiness could be the freedom to love more than one woman at the same time.” Ick ick ick. Even worse? When Hector finds out that Ying Li is actually a prostitute, whisked away by her abusive pimp in the middle of their lunch date, he laments, “Sometimes happiness is not knowing the whole story.” Infinity ick.

While other actors have shining moments in their bit parts, especially Christopher Plummer as a beanie-d L.A. professor and happiness guru, Pike is wasted in her underdeveloped, frustrated girlfriend role. Like Collette, she tends to appear on the edges of films, in roles that are not written particularly well or are just not given top priority, and carves out a presence worth remembering. There is more to Clara than what’s on the page, and it’s delivered almost entirely through Pike’s offbeat delivery of a line, a laugh, a look that speaks volumes.

Pike and the character she plays deserve better than what Hector has to give. Luckily, her next role is in David Fincher’s Gone Girl; so all we have to do is wait.