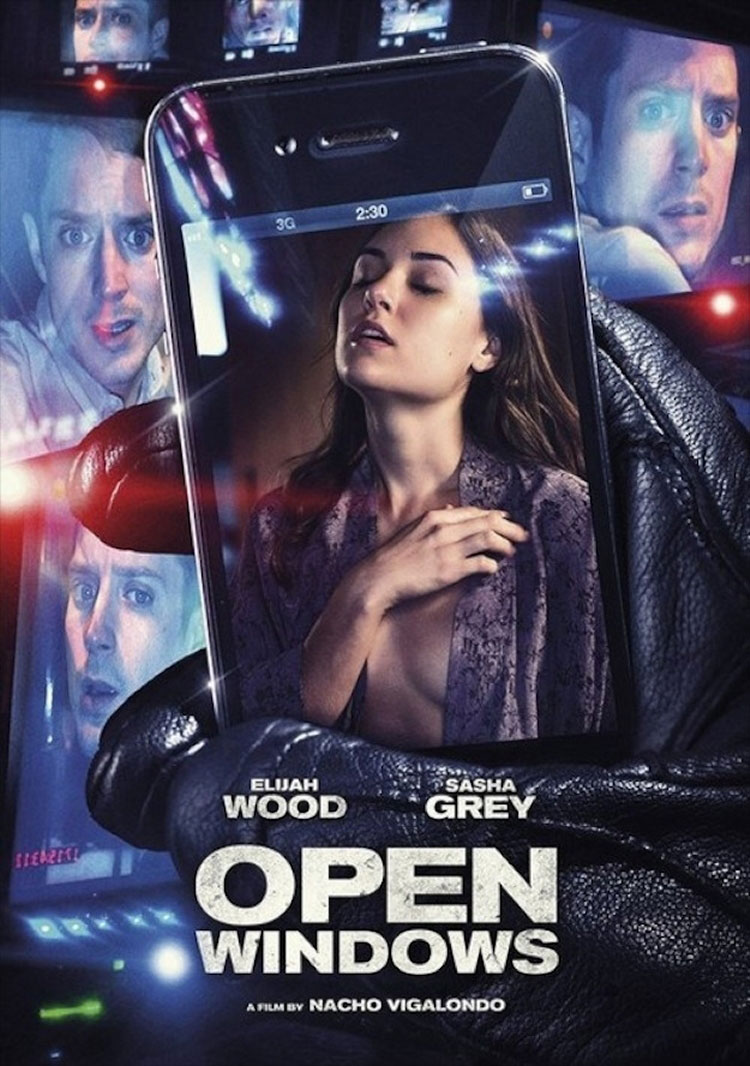 Open Windows is one of the most innovative, hyperkinetic films I’ve seen in years, but something about its style almost feels inevitable given the state of modern media consumption. Director Nacho Vigalondo, who’s best known for the mind-bending time-travel thriller Timecrimes, attempts to replicate the look and feel of how people interact with the world around them in this age of digital overstimulation and multitasking. To pull this feat off, he splits almost every frame of his film into multiple sections, which are meant to resemble a computer’s open browser windows and software programs.

Throughout the film, the viewer is bombarded with video-chat windows, security camera footage, GPS maps, unread emails, and a symphony of chimes and dings signaling incoming messages and successful uploads. The result could be disastrous, like some kind of temporary ADHD, but Vigalondo skillfully guides the viewer’s focus with verbal queues and subtle pans and zooms. Still, even with the director’s gentle nudges, it takes a while to get into the hang of things, as Open Windows requires that viewers alter the way they typically watch films. This stylistic experimentation would be challenging enough attached to a straightforward narrative, but the story is anything but straightforward.

Elijah Wood, who’s been on a roll choosing quirky indie films recently (Grand Piano, the better-than-it-should-be remake of Maniac), stars as Nick Chambers, a lonely computer geek who’s obsessed with a young actress named Jill Goddard (Sasha Grey). When we first meet Nick, he’s watching a trailer for Jill’s new Hollywood blockbuster, Dark Sky, as he takes countless screen caps of the actress for his fansite. This scene, like many in the film, is shot from Nick’s point of view. This perspective works twofold: it throws viewers immediately into the film’s frenetic, technology-based world, and it efficiently establishes character. As we watch Nick sort the actress’s pictures into different folders while simultaneously ogling her at a press conference, the depth of his obsession becomes clear. And those feelings are compounded by the fact that he just won a contest to meet Jill in person.

Soon, a mysterious stranger named Chord (Neil Maskell) contacts Nick over video chat. He informs our hero that Jill has cancelled their date. He also confides that he has hacked into the actress’s cell phone and laptop, so he can monitor her every move. At this point, the film’s narrative goes into overdrive, as Chord uses his amazing hacking skills to blackmail Nick into committing a series of illegal activities, including binding and gagging Jill’s boyfriend and sexually harassing the actress over Skype. Eventually Nick revolts, and Chord kidnaps Jill as his punishment.

Things get even harder to wrap your head around from there, as Nick, Chord, and a trio of Parisian hackers called Triops, who assist Nick because they think he’s a different hacker named Nevada, use their combined computing powers to save or harm the actress, respectively. The film’s final two acts are kind of like what you’d get if you combined the voyeuristic aspects of Rear Window with the action and gadgetry of Mission: Impossible and the heady concept and special effects of The Matrix. Got that? Neither did I. And therein lies the film’s fatal flaw.

There’s just too much going on, both visually and narratively. It’s information overload, and I would’ve needed a handful of Adderall and a pot of black coffee to acquire the focus necessary to make sense of it all. In addition, the film unfolds in real time, or pretty damn close to it. This gives the narrative a greater sense of urgency, but it also doesn’t allow for many lulls in the storytelling where viewers can catch their breath and process everything that’s happened.

But maybe this is what Nacho Vigalondo had in mind when he made Open Windows (he also penned its screenplay)—that is, to capture the complexity, confusion, and frustration of the Digital Age. With a little wink, Vigalondo acknowledges how convoluted the plot is halfway through the film, when Pierre, one of the French hackers, assures Nick (and the audience) that, “You always have to wait ’til the end. It will make sense in the end. It always does.” Unfortunately, Pierre is full of shit. The film ends with an unnecessary, Scooby-Doo–style twist that only further complicates things, rather than offering up any sort of cohesion or closure. Still, for all of the movie’s flaws, you have to applaud Vigalondo for his audacity and ambition. You can call Open Windows a lot of things—baffling, sloppy, unfocused, and heavy-handed—but you can’t call it lazy.