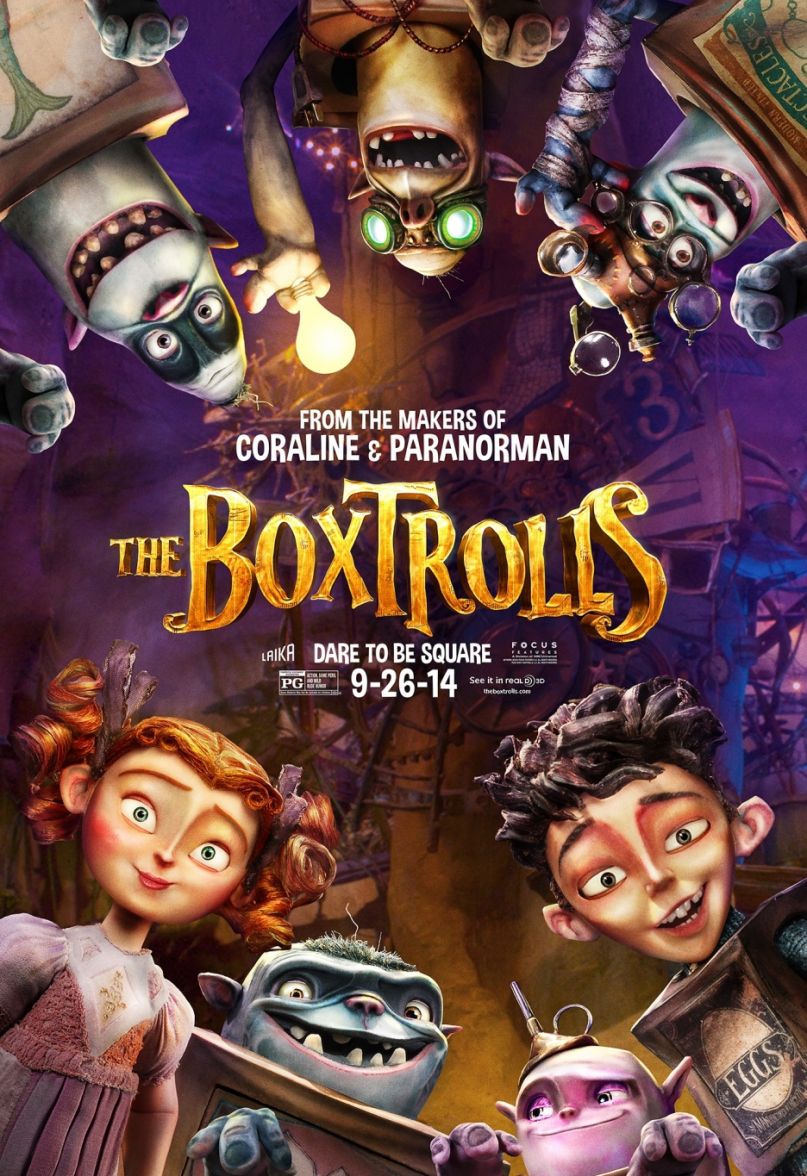 Things are constantly clattering and clanking throughout the whole of The Boxtrolls. A steampunk riff on a traditional fairy tale of misunderstood creatures from a (not-so) faraway land, Laika’s third feature-length film is full of gadgets and gizmos and cheeses and anachronisms and all manner of other unusual offerings, bouncing around endlessly in a manic, fast-paced ball of childlike glee. But tellingly, most of the film’s loveliest moments come when it actually bothers to slow down for a moment or two.

Early on, the fable of Eggs (newcomer Isaac Hempstead Wright) is told, from when he was a baby on the streets of a seaside, steeply hilly town. After being forced from his home under duress, Eggs is taken in by the Boxtrolls, a strange mass of lumpy, mildly slimy, but wholly friendly creatures who live in the shadows and steal trinkets by night. Known only by the respective crates they’ve assumed as clothing and permanent hiding places alike, Eggs is reared by the paternal Fish and by others, learning to hustle, hunt, stay by your family, and most importantly of all, hide from anything that ever poses a threat.

But Eggs isn’t a Boxtroll, no matter how deeply he believes he is. This point is driven home and underlined when he’s spotted one night by Winnie (Elle Fanning), the over-curious daughter of town nobleman Lord Portley-Rind (Jared Harris). And when the Boxtrolls start disappearing thanks to the efforts of Archibald Snatcher (Ben Kingsley, tearing into cartoon villainy with vigor), who wants nothing more than to be accepted into the town’s high-society scene no matter the cost of life, Eggs has to use his unique advantages to find a balance between the honesty and kinship of the Boxtrolls, and the bravery of men.

(Read: Everybody, Meet Laika: The Critics’ Choice for Film Animation)

Like Laika’s other movies, The Boxtrolls is a visual feast in every way. Through their hybrid of CGI and traditional stop-motion animation, sequences like a wild, swirling trip through a traditional dance circle have a grace and majesty to them that’s ever rarer in modern animation. The Boxtrolls, likewise, are deliberately crude, but meticulously detailed as well and wholly alive for misshapen “monsters” who call the gutters and sewers home. From a visual standpoint, the film is endlessly inventive; Laika appears to have used Aardman’s template here, fusing Anglophilic weirdness with a warm story of family and acceptance. (Indeed, most of the biggest come from the English comedy dream team of Richard Ayoade and Nick Frost, as a pair of henchmen who don’t know they’re henchmen.)

Unlike Laika’s previous films, though, The Boxtrolls has neither the moving loneliness of ParaNorman nor the genuine danger of Coraline, though it surely flirts with both. There are moments of inspired brilliance, such as a town burlesque show that turns into a horrifying anti-Boxtroll rally before long, but The Boxtrolls is more often a fast-moving, action packed trifle, one that’s impeccably well-animated but doesn’t linger for very long. The film pleads for tolerance and perspective, but has little, and a late-game reveal involving the town’s favorite dancer leaves a bad taste in the mouth. The Boxtrolls may still make for a better watch than a great many movies spoon-fed to children in the present era, but it’s sometimes a little closer to the chaff than a Laika film should be.