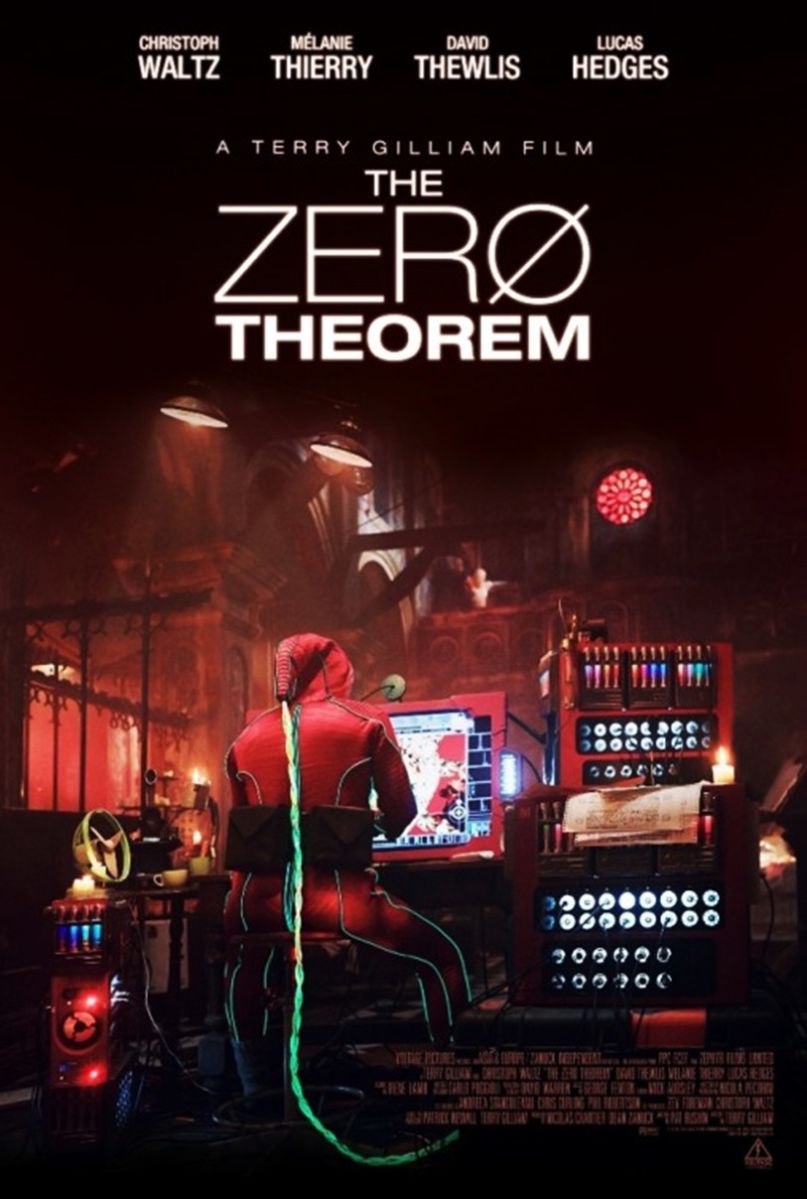 For the majority of The Zero Theorem‘s 106-minute but seemingly never-ending runtime, the anxious, hairless computer hacker Qohen Leth (Christoph Waltz) pounds away at his keyboard in an attempt to solve the theorem of the film’s title, that “zero must equal 100 percent,” and becomes increasingly frustrated when he comes up short. The experience of watching Terry Gilliam’s final entry in his self-proclaimed “Orwellian triptych,” which began with 1985’s Brazil and continued with 1995’s 12 Monkeys, invokes a similar feeling: What’s the point?

Gilliam is a polarizing director. Much like Baz Luhrmann, Gilliam has a madcap style and over-the-top vision that is either instantly captivating or instantly off-putting, depending on who you ask and also, perhaps, to which film you are referring. I consider Fear and Loathing in Las Vegas, Brazil, and Monty Python and the Holy Grail (which Gilliam co-directed with fellow troupe member Terry Jones) to be his masterpieces, but I know plenty of people who only like The Fischer King and can’t get through any of Gilliam’s zanier stuff without grinding their teeth in horror. In a way, I understand. Getting through The Zero Theorem felt like trudging up a mountain in the hopes of finding a lake, and upon reaching the top, discovering that there is no lake, just a dried-up hole. In sum, Gilliam either hits or misses, but always spectacularly.

Part of the reason that The Zero Theorem misfires is because it gets off to such a promising start and then goes nowhere. The world that Gilliam establishes is intriguing, albeit oversaturated in his signature bizarro fashion. Quohen lives in a huge gothic church like Quasimodo, venturing out into the futuristic pop-art city that surrounds him only for work and the odd furry costume party. The hacking facility that employs him is run by the mysterious, white-haired Management (Matt Damon, miscast) and after meeting Management at said party, Quohen is given the Zero Theorem assignment. He also is saddled with a few distractions: a busybody co-worker (David Thewlis), Management’s teen hacker son Bob (Lucas Hedges), a loopy shrink for web therapy sessions (Tilda Swinton), and a sweet French call girl named Bainsley (Mélanie Thierry) who enjoys playing dress-up.

Thierry is a charming actress, intimating that Bainsley is more than just a webcam girl posing for clicks on a site that plays an über creepy cover of Radiohead’s “Creep” as background music. Unfortunately we don’t learn much else about her, other than that her father died when she was young, she stumbled into a life of sex work at some point, and she is in love with Quohen, despite the couple’s stunning lack of chemistry and no ascertainable reason for her devotion other than that they both seem lonely and in need of a friend. I was expecting more, but no: Bainsley exists only to serve as the MPD eye candy upon which Quohen can project and unload his complicated feelings. She is his catalyst for change, the impetus for his physical and spiritual awakening, and what does she receive in return? You guessed it: zero.

It’s clear that the audience is supposed to care about Quohen. He is socially awkward, which should be endearing. He’s waiting on a phone call from a voice that he believes will tell him his life’s purpose, and he has faith that it will come, which should be inspiring. He uses the pronoun “we” when referring to himself. He is us. Get it?

The problem is that he is not we, not really. Despite Waltz’s best efforts, and he is trying here — the strain is palpable — Quohen never once registers as anything but a bald Christoph Waltz over-acting in a bad Terry Gilliam movie.

Granted, getting lost in a character is much easier when the writing is good, the other players are interesting, and the story goes somewhere worthwhile. Regrettably, The Zero Theorem fails on all counts. It’s a satire that’s not sharp enough, an allegory that’s not powerful enough, and it’s all wrapped up in a garish dystopian bundle with nothing to say that hasn’t been said before.

Of course, Gilliam has a message that he wants to impart. We all want to be special. We all want life to mean something. But what if we’re wrong and life does equal “zero”? It’s a compelling idea, but The Zero Theorem does a shoddy job of delivering it, especially when it comes to building an atmosphere to convey it. While the scenes in Quohen’s church abode and workplace are fine to look at but not as striking as they should be, those that take place on an “island” of Quohen’s imagination are so kitschy and sound-stagey that I expected a boom mike to drift into frame at any second. The CGI of Quohen and Bainsley flying through space is even worse — laughably bad, even.

Let’s put the appeal of this film on the scale of its theorem, shall we? If “worth seeing” must equal 100 percent, then The Zero Theorem putters out at 50, tops.