Film Review: To Be Takei 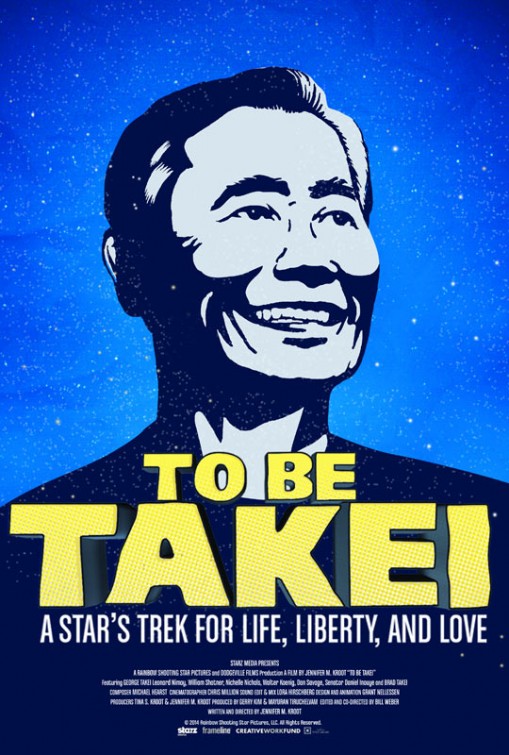 To Be Takei is a very cute documentary. Sharing the trials and treks of famous cult actor George Takei, we get to witness a nifty if incomplete-feeling portrait of a progressive hero. What feels like it might have been developed as a reality TV show makes for a neat little diversion. You come to realize just how much the man has done.

We generally know Takei as Hikaru Sulu, the Asian lieutenant and helmsman of the USS Enterprise from Star Trek. Takei’s acknowledged the role as being part of creator Gene Roddenberry’s multi-national future vision of peaceful exploration in outer space. While the show tanked in its initial run on NBC, the franchise gained new, unbelievable life as big-budget movies from Paramount starting in 1979 with Star Trek: The Motion Picture. Takei was a big beneficiary of Star Trek, and you can tell he’s grateful for a number of reasons.

It allowed him to inhabit a strong, intelligent, decently written Asian role, especially when he was playing Oriental types for Jerry Lewis at a time when Asian actors were often mystics and opium dealers in popular entertainment. According to B.D. Wong and John Chu, who show up as talking heads, Takei was a role model for young Asian Americans, proving that you can have dignity as an Asian in media. This is important. Star Trek developed and earned a fanbase that was willing to follow and listen to its stars. In a way, To Be Takei suggests that Star Trek was a magnificent soapbox for Takei, because it gave a smart guy the chance to have a voice.

Star Trek, and Takei’s popularity stemming from it, roots To Be Takei as it continues to show everything he’s accomplished over the last 40 odd years.  As a politico, Takei went on to run for City Council in Los Angeles and was on the board for Southern California’s Rapid Transit. As an advocate, Takei came out in 2004 with a bang, declaring it okay “to be Takei” and owning his homosexuality after years of repression. He suffered through Japanese internment in the 1940s as a small child after the bombing of Pearl Harbor. He’s maintained a lasting relationship with his partner Brad Altman (now Takei) since the 1980s and recently was able to get married to Brad (William Shatner flaked and didn’t show, a point of contention in the doc). Takei recently wrote a musical about internment that may make it to Broadway this year. And most lightheartedly, Takei has made a name for himself as a web humorist, with a Facebook page populated with pictures and witticisms for over five million followers and growing.

To Be Takei covers all of this succinctly, and you realize things you may likely not have known about the guy. You’ll walk out thinking he’s interesting, but you’ll still be wondering, where is the real Takei?

Takei’s very much in control of his narrative. He suffered, he had laughs, he’s done great things – all of it topped with his deep, calculated laugh. It’s not a drab story at all. Yet, there are shades of tension in his relationships with Brad and with Shatner, and one can’t help but wish director Jennifer M. Kroot explored a little further. Still, Takei has it his way.

At one point in the doc, there’s a clip of Takei on Jimmy Kimmel Live! after former NBA star Tim Hardaway said he hated gay people, straight-up. Takei, instead of screaming, took the clever road, making fun of the basketballer’s homophobia by making a mock PSA. Takei begins to declare how troubled he was by Hardaway’s words. Then he turns it. He states that on behalf of gay people everywhere, he likes Hardaway. All gays like Hardaway … oh my. Takei turns the skit into a laugh at Hardaway’s expense, showing how ridiculous the former NBA star was in thinking that gay people are molesters and birds of prey. Takei jokingly rubs a picture of Hardaway to point out big, beefy muscles and those kinds of things. It’s ludicrous, and it goes to show just how childish and insecure Hardaway’s words were, and Takei makes comedic gold of it. It’s moments like this where you see the greatness and charm of Takei.