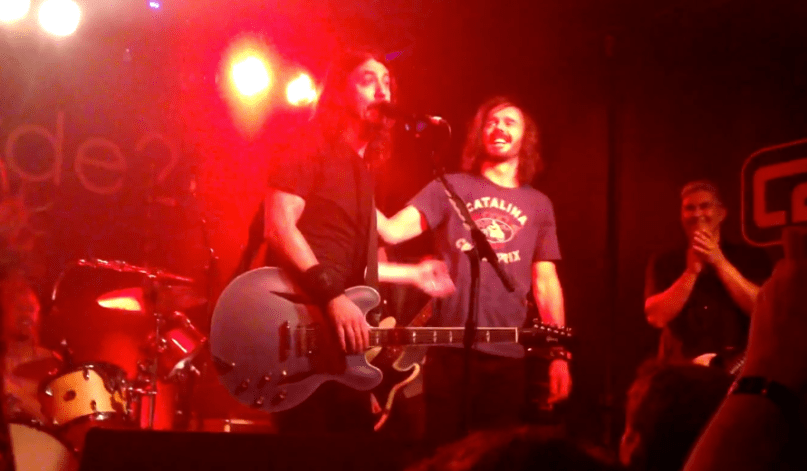 In another night that’ll go down in Foo Fighters lore, the band performed a secret show in Brighton, England on Wednesday under the moniker, The Holy Shits. Playing to a capacity crowd of just 600 diehard fans, Dave Grohl announced, “How about tonight we do a bunches of stuff we might not do at the old places,” before the band segued into “Enough Space”, a song which hadn’t been performed live since 2012.

From there, they rattled off performances of “I’ll Stick Around”, “See You”, “New Way Home”, “Up in Arms”, and “Big Me”, none of which had been played live in the last two years. Of “Up in Arms”, Grohl told the audience it’s “a love song – we don’t play it enough because when we play it at festivals the line for the toilets get really long. I don’t think anyone’s going anywhere tonight though, if you have to go do it on the person in front of you,” according to NME.

As the setlist began to gear more toward greatest hits, Grohl said, “We’ll try to play every song a little bit different then we usually would, just to make it interesting for you.” Foos turned “Learn To Fly” into a thrash metal song, and Pat Smear performed an extended guitar solo during “The Pretender”. Also during “The Pretender”, the band offered a brief snippet of music from their forthcoming new album, Sonic Highways.

Watch a number of fan-shot video below, along with the full setlist. The band will play two more “secret” UK shows this week before they headline the closing ceremony of the UK’s Invictus Games. During last night’s show, they also teased forthcoming performances at London’s Wembley Stadium.

Encore:
All My Life