I Saw Ty Segall Four Days in a Row, and Here Is What Happened 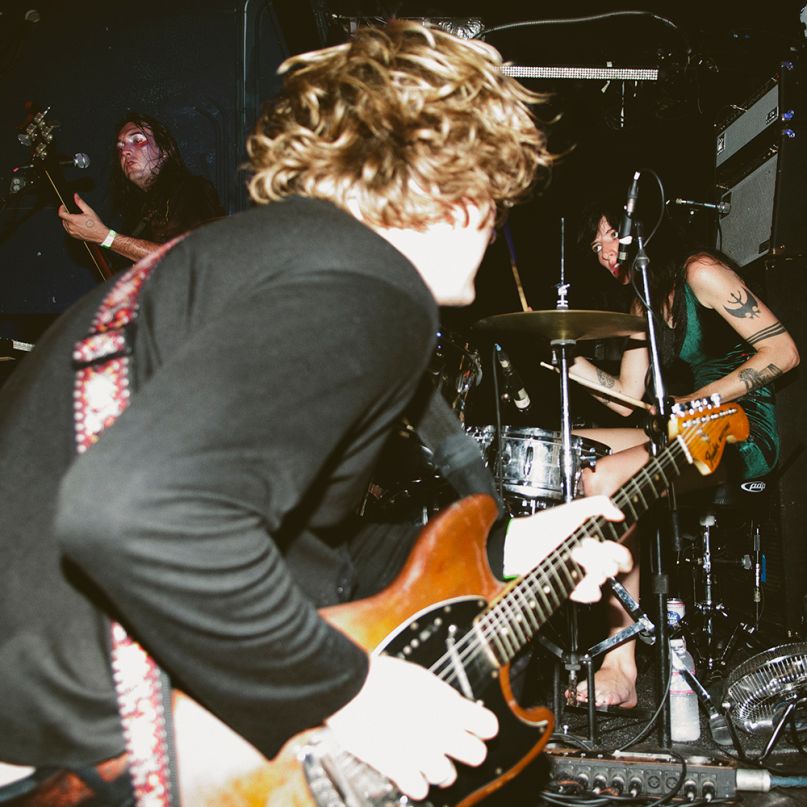 I hate to say it, but we need more rock stars. We need more artists willing to embrace showbiz and glamour; it’s necessary for the survival of rock ‘n’ roll, and damn near critical for the evolution of today’s West Coast sound, which seems buried beneath a thicket of Tascam 388-recorded noise that sounds too ’60s garage, too proto-punk, too uncooked to serve any purpose beyond losing your mind at a show. The recent West Coast garage revival, dripping with psychedelic and Krautrock influences, is suffering from repetition; stoner rockers signed to labels like Burger, Lolipop, and John Dwyer’s Castle Face are raw, but too similar-sounding to crossover with a record that has a human element but also a grand vision, like Bowie’s Station to Station or The White Stripes’ Elephant. The scene seems too crowded with bands stuck in the prototype phase of development — borrowing their sound from garage and surf compilations like Crypt Records’ Back from the Grave and Posh Boy Records’ Beach Blvd. without ever dipping their toes into the shark-infested waters of rock ‘n’ roll virtuosity, driven by guitar showmanship and glittery performance art. In that sense, the scene needs a new rock star to shake things up a bit.

It’s taken about six years, but Laguna Beach-born, San Francisco-cultivated garage rocker Ty Segall seems to be the guy. Sure, he’s a revivalist, but like Tarantino borrowing from Japanese horror, Segall takes his various influences — Black Sabbath, Aladdin Sane-era Bowie, Neil Young — and adds layers of grit and runs it through a chaotic funhouse mirror of influences as varying as Grand Funk and Mudhoney. Like Tarantino, he doesn’t connect to the modern world, which shows on a dozen or so releases in the past six years through various bands (Fuzz, Ty Segall Band, Sleeper Band), EPs, splits, and an endless web of collaborations with kindred spirits like Mikal Cronin, White Fence, and King Tuff. A workaholic, Segall’s output is a dizzying showcase of his influences, inviting you to listen in, dig through your record collection, and check out ’70s rock records by bands like Hawkwind and Deep Purple, rather than streaming synthpop KCRW.

At 27, Segall has already released a handful of concept albums, including last year’s Sleeper, a weird, acoustic meditation on death, and now with his seventh solo effort, a 17-track pivot from his garage rock roots, Manipulator, Segall finally seems to be clearing the static towards a classic rock sound that seems to belong to a new identity — a reluctant rock star floating off into space, evolving into a Starchild, a new species of garage rocker who seems destined to be what Jack White once was: a hero for the freaks, a transcendent figure who sets the tone for his peers to follow.

During four nights at the Echo (August 28-31), Segall would wield his fireglo Gibson Les Paul into the smoke-filled air of L.A.’s underground fun factory, swinging his arm around like Pete Townshend, and finger-tapping as sweat dripped from his left hand (covered in an eyeball tattoo), as if he was crushing volcanic rock into a diamond. Everyone paid witness to his magic, including the likes of Mac DeMarco, Jessica Clavin of Bleached, and Max Kuehn of FIDLAR, as Segall ascended into a new stratosphere where his Lennon-like vocals screamed through a thick sludge of fuzz and flashy guitar work. The combined effect was a big bang of noise that was unnervingly loud, shaking the two gothic chandeliers lighting the Echo’s parquet courts. Segall would tear through two guitars and a couple amps before he was done.

Originally a drummer, each night Segall would stomp on his Death by Audio fuzz pedal like a drummer pounding a bass drum — releasing screeching solos instead of crashing copper. The Ty Segall band, which includes Emily Rose Epstein on drums, Charlie Moonheart on guitar, and Segall’s high school buddy and accomplished solo musician, Mikal Cronin, on bass and synth, would play through nearly every track off Manipulator, followed by an encore that included rarely played Segall cuts like “Imaginary Person”. On each of the four days, I sat next to Segall’s Fender Quad Reverb amp and listened to each note, every flurry of twisted solos, and witnessed the evolution of Segall during a turning point in his career, floating off into the cosmos with his Manipulator band.

—-
“Tonight we are Manipulator,” said Segall, sporting an all-white outfit covered in a circle symbol that Segal has tattooed across his left bicep. Segall insists the symbol is just a design that doesn’t have any hidden meaning. It just looks cool, and when the band needed a logo, presto.

Each night, just like the first night, Segall would “page” Doctor Long Finger (a bat-like organist from parts unknown) to come up and play the organ intro to “Manipulator”, driven by Cronin’s thick Rickenbacker bass groove and Segall’s psychedelic guitar riff. With his shaggy, blonde moptop waving around, spraying the crowd with sweat, Segall highlighted night one by walking onto the parquet courts of the Echo and ripping a “Free Bird”-caliber solo.

His Bowie-esque silver lipstick and eyeliner melted off his face by the end of the night, when he would close the show with “Wave Goodbye”, off 2012’s Slaughterhouse, which opens with a sludgy wall of sound that descends into a warlike Black Sabbath finale that seems fitted for a stadium show, but instead rattled the walls of the Echo. “This was the first real club we ever played,” said Segall, who now lives near the Highland Park neighborhood of Los Angeles. Highland Park resident and comedian Marc Maron was also in attendance.

Openers: Wand and Endless Bummer
—-
Throughout each of the four days, Segall would pummel his guitar, bending the strings with the full force of his fingers. Stretching back to the limits of control, Segal would aim his guitar directly at the cosmos (its strings dangling from the headstock) and shred with the flair of Randy Rhoads and raw power of Ron Asheton. By the end of each set, his guitar strap would come flying off, and soon, he was having issues with his instrument. On day two, his guitar just stopped working. “Sorry guys, my shit’s broken.” After a blistering set that had Segall sliding across a beer-soaked stage, stepping over broken, horn-rimmed glasses and empty cans of beer, dodging human projectiles in the process, he decided to let loose. Channeling his inner Jim Morrison, Segall dropped his guitar and belted out a cover of Bad Company’s “Feel Like Makin’ Love”. Standing on top of the crowd — floating underneath a current of his adoring his fans — Segall transformed into a rock god. He even took time to passionately make out with his girlfriend before delivering a strange speech about meeting a hobo and giving him the shoes off his feet. Again, he was channeling Morrison. It was gross excess, pure rock ‘n’ roll, and supremely entertaining.

“The next band is a cover band”

—-
Dressed in black and covered in silver stars and moon-shaped figures, Segall wished the mysterious Doctor Long Finger a happy birthday before lighting up the stage with “Green Belly”, a standout acoustic track off Manipulator, which he played on his electric guitar live. For Segall, day three turned into a social experiment, testing the limits of both his audience and band. At one point, he ripped open a bag of tortillas and tossed it into the audience, spitting water at the crowd for good measure. Once again, his guitar stopped working, and after working out the issue, Segall went right into a medley of unplanned covers: KISS, Black Sabbath, Heart, even Lynyrd Skynyrd.

“The next band is a cover band,” he said, bringing various members of the crowd up to sing, while he nearly blew his amp with feedback that sounded like an ambulance speeding through a war zone. The next day, when I asked him if the covers, which included KISS’s “Detroit Rock City”, were reflective of his influences on Manipulator, Segall grinned and shook his head: “People thought I went nuts last night. Man, it was just a joke … some people got it.”

Openers: Jack Name and Prettiest Eyes
—-
On day four, Segall was back to full form. “This one’s for Tim,” a likely reference to White Fence’s Tim Presley, in attendance each of the four nights. Playing “Susie Thumb”, the single off Manipulator, the crowd began bouncing around to the scuzzy bass and catchy melody, but once Segall began to solo, Jessica Clavin of Bleached could be seen headbanging as if she was possessed by his fire-breathing ax. After three days of working out the kinks, Segall was flying through the set. On “Tall Man Skinny Lady”, the funky drumming was engulfed by a furious session of noise, where Segall ditched his guitar and sat on the floor, taking control of a noise generator to pump out a high-pitched solo that sounded like controlled chaos. It would set the tone for the rest of the set, where Segall would indulge in his prodigious guitar work by jumping up, showing off with Townshend-esque antics that seemed far too theatrical for a so-called “garage rocker.”

Unlike his garage rock contemporaries, Segall doesn’t seem content with creating lo-fi records with a singular emotional effect: primal release or raw aggression. Bringing Manipulator to life during a live show, it’s clear Segall wants to take his audience on a journey through a prism of ideas and feelings. He’s no longer interested in churning out music without a clear direction. He spent over a year working on Manipulator, obsessing over every detail to create a concept album that indirectly addresses the manipulative forces of society, such as the media and corporations. He’s also difficult to pin down, unwilling to divulge too much about his personal life, which seems like a calculated move on his part to create a certain mystique, like Ziggy Stardust, that goes beyond the irreverent ethos of garage rock and digs deeper with something more cinematic. When asked what the plans are for the next record, Segall wiped the sweat off his face and seemed uncomfortable unraveling his muse in front of me: “I don’t know, man. I guess I’m confused right now,” but the look on his face, along with four days (OK, maybe just three) of absolute control suggest that Segall isn’t confused. He’s building a legacy, and Manipulator is just the current incarnation of his new voice.