by Sasha Geffen and Julian Ring 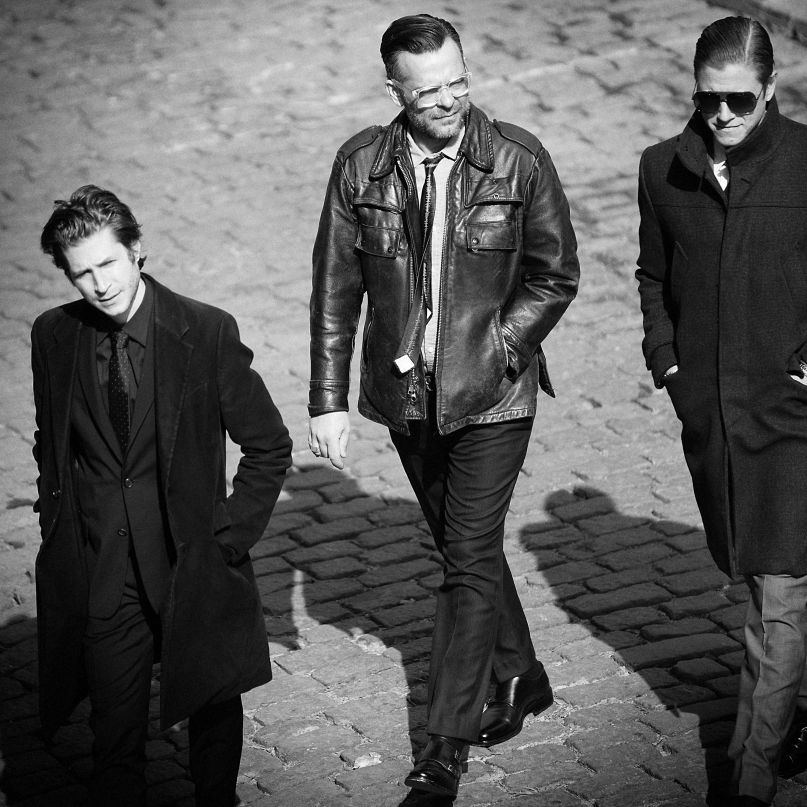 No one from the New York indie underground showed up as well-dressed as Interpol did in 2002, but it didn’t take long for the band to prove they were more than the sum of their suits. Turn on the Bright Lights, the band’s seminal debut, turned 12 this year, and yet its stark, winding compositions sound as eerie, eviscerating, and paradoxically fun as ever. Interpol bred post-punk with post-rock and ended up with a startlingly durable hybrid.

It’s strange to think that Interpol’s new record, El Pintor, is only their fifth. They feel like a band that never quite went away and never really revamped the strategies they started with; the suits stayed on, the riffs stayed echoey and huge. Despite their detachment from the indie music culture that bubbled and evolved around them, Interpol are still a fixture. For those of us who started really hearing music around the same time Interpol started really making it, they’re a core figure in our cultural identities.

To celebrate a whole new batch of Interpol songs arriving in the world, we revisited their back catalog and picked out the tracks that meant the most to us. Turns out these sharp-suited perma-creeps can still ring up the chills for hours. Here’s their best.

“A creature is a creature though you wish you were the wind.” Play that line to any teenager who’s ever felt like a prisoner in their own mutant husk of a body and you’ll get more than a glimmer of recognition. Through a cascade of barely discernible spoken words, Paul Banks’ sorrowful baritone rings through. He sounds like that felon stuck in solitary that he sings about earlier on Antics, only singing from inside a much smaller cell. As ever, there’s no hope of release from this psychic captivity: “He whistles and he runs, so hold him fast,” Banks urges. When you find yourself both the inmate and the warden of your own head, there’s nowhere you can run. –Sasha Geffen

Don’t listen to the slow stalk of the Azealia Banks version until you’ve heard the original: a slice of dance-punk from the wrong continent that still sounds right. It’s an honest-to-goodness lust song — one of the few in Interpol’s catalog — and, unsurprisingly, they take a creepy and calculated approach to the art of seduction. “I submit my incentive is romance,” sings a lovesick Paul Banks, laying his cards out on the table with just enough soul-baring to scare off whoever’s caught in his gaze. Thankfully, he’s backed by a sly groove that’s totally danceable. And hey, there’s always OkCupid. –Julian Ring

The closer to the debut record that would drag them out of the New York underground and onto stages around the country, “Leif Erikson” finds Interpol at their softest, sweetest, and most despondent. The song’s guitar chords shift in and out of focus, while Carlos D’s gentle bass touches rock like a boat in the breeze. But it’s Paul Banks’ lyrics that do the heavy lifting, here: Throughout Turn on the Bright Lights, he stays shifty, rarely lifting the enigma of his metaphors. “Leif Erikson” lets his pathos click into place: “She says that my sentimental side should be held with kid gloves/ She doesn’t know that I left my urge in the icebox.” His phrasing is simple yet tangible, and he’s never sounded more vulnerable than when he closes the record with the words, “We’ll collect our lonely parts and set them down/ You come here to me.” –Sasha Geffen

The star here is guitarist Daniel Kessler, who gracefully morphs ominous stabs into fast-paced indie rock at a moment’s notice. It’s almost as if singer Paul Banks is jeering at his own bandmate’s creation as he declares antithetically, “Slow decay/ I won’t stop fighting.” A few accents — theremin-synth wobble, glockenspiel, strings — lend “Who Do You Think?” a poppier flavor (for Interpol), but also a more urgent clip. It’s a concise, muscular track that rocks hard, yet is packed to the gills with, as Banks says it through clenched teeth, “des-pair.” –Julian Ring

Carlos D’s bass has never sounded so warm as it does on the easy back-and-forth that carries “Evil” into its chorus. By the time Paul Banks is hollering to “look the other way,” the band’s textural contrast is set on high, their focus sharp. Daniel Kessler’s guitar cuts rough against Banks’ brassy shouts while Sam Fogarino’s jerky drum phrases keep the whole machine just unsettled enough to stay interesting. The second single off of Antics, “Evil” still feels like Interpol at their tightest and most concise. Rather than ramble off into the atmosphere, the band foregrounds the song’s hard, fast strokes, cohering like clockwork for the first time. –Sasha Geffen

From the “Marquee Moon” guitar slices to Sam Forgarino’s agile drumming, “Obstacle 1” is one of Interpol’s best-known songs for a reason. So its craft is nothing remarkable; this band places more stock in art-school aesthetics than lyrical or structural depth, and taken for what it is, the song serves as a fine introduction to Interpol’s brand of pinstripe depression. Singer Paul Banks howls his unfocused aggression with such a rawness as to make you wonder how such dark, dark thoughts can incubate underneath that pristine haircut. It’s no matter — listening to the exorcising of demons has never been quite this captivating. –Julian Ring

Here’s Interpol at their most versatile: Loud-quiet-loud dynamics, switchback verses, and a whole lot of vocal sneer. There’s even room for an organ to simmer — impressive when you consider that it’s running up against the chorus’s dialtone guitar. By their third album, Interpol must have been weary of being pegged to the New York scene (hence the romanticized/despised West Coast) and the Joy Division comparisons (even the flattering ones), so this track features bit influences from everyone — Franz Ferdinand, Pixies, future tourmates U2. The band synthesizes them all pretty well, too, making it one of Our Love to Admire’s more ambitious standouts. –Julian Ring

“Specialist” had the hard job of following up both “PDA” and “NYC” on the self-titled EP Interpol released in 2002. Unlike those two singles, it didn’t make the cut onto the band’s debut full-length, but this multi-part suite dives down the same sort of twists and turns that gave Turn on the Bright Lights its expansive, unpredictable atmosphere. Paul Banks moves from a clipped monotone in the early bars to a full-blown roar by the climax, pushing the song to nearly seven minutes full of motion, anxiety, and danger. His lyrics range from the small (“I don’t like my clothes anymore”) to the melodramatic (“all I want is to do the very best by you”) to the plain strange (“I am speckled like a leopard”), making “Specialist” a full spread of the band’s early, tentative extremities. It’s rare to find a b-side with this much range and even rarer for it to sustain its urgency for more than a decade. –Sasha Geffen

From the first chime of those faraway guitars in “Untitled”, Interpol set the distance that’ll go on envelop the whole of Turn on the Bright Lights. It’s a bold move not to name the first song on your debut, and I’m betting Paul Banks knew that when he let the absence of a title become the title on the album’s track one. But for a record that’s largely about absence, “Untitled” is the perfect warm-up. Banks’ lyrics ring simply over the undulating chords. “I will surprise you sometime/ I’ll come around when you’re down,” he promises just before Carlos D’s elastic bass stretches the song to its coda. At the head of an album packed dense with language, “Untitled” ripples with its own negative space, leaving plenty of gaps for the band to fill in the record’s remaining tracks. –Sasha Geffen

Has Paul Banks ever sounded more maniacally toying than on this gothic cut? “You’re so cute when you’re frustrated, dear/ Yes, you’re so cute when you’re sedated,” he mutters, Lou Reed-like, as if he’s some new breed of monotone madman. On “PDA”, Banks speaks awkwardly, uncomfortably, taking things back as soon as he’s said them, yet his bandmates’ precision would have you believe he’s far more self-assured. It’s a beautiful dichotomy. Daniel Kessler’s atonal carillon rights itself just in time for the chorus — almost a different song, still gloomy as anything while slowly loosening its grip. –Julian Ring