Could you imagine any other song for this movie's theme? 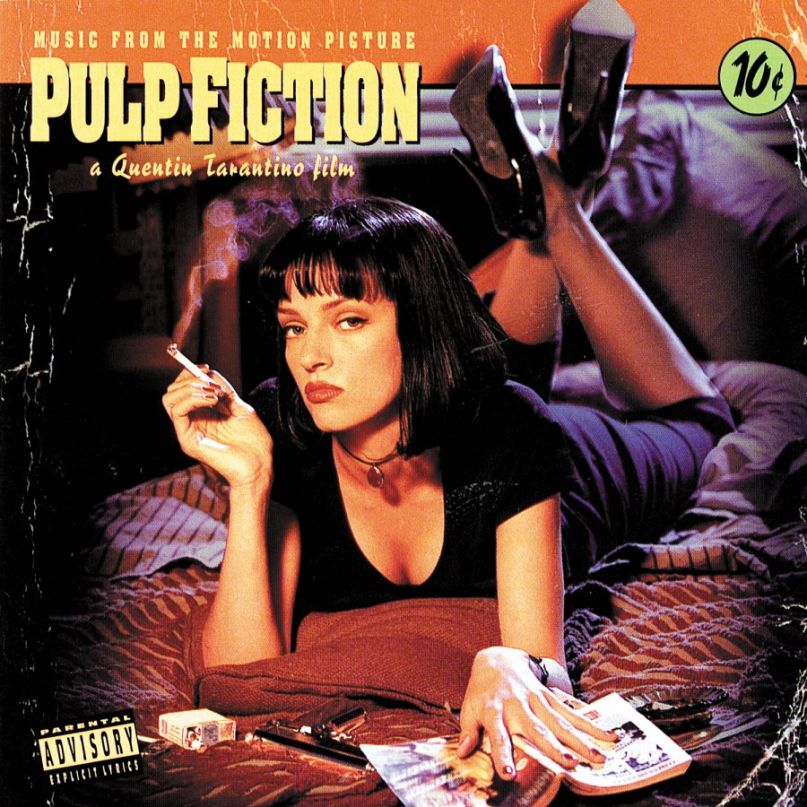 Ever wonder which movies inspire your favorite bands or how filmmakers work with artists to compile your favorite soundtracks? Sound to Screen is a regular feature that explores where film and music intersect. This time, Blake Goble’s going to talk about Quentin Tarantino and one of the greatest mix tape soundtracks ever produced.

ˈmikstāp/
noun
A compilation of favorite pieces of music, typically by different artists, recorded onto a cassette tape or other medium by an individual.

There’s a throwaway gag in Space Jam, the 1996 Warner Bros. marketing tentpole, wherein Elmer Fudd and Yosemite Sam begin shooting pistols at a basketball-playing alien. In that little moment, the gun-slinging duo are not only dressed in black suits a la Jules and Vincent, but Pulp Fiction’s iconic theme song, “Misirlou” by Dick Dale & His Del-Tones, starts slamming in the background. Just from the song’s super-speedy strumming, audiences everywhere recognize the reference.

It’s a film comprised entirely of great moments. Curious, clever, vulgar, and altogether thrilling moments. But part of what burns those images into our head is how Tarantino turns each scene into a brilliant marriage of sound and vision, thanks to his trademark dialogue and his penchant for unique soundtracks. These are two qualities that have shined throughout his entire career.

In 1992, Reservoir Dogs showcased an infamous torture scene with an ear being cut off to the tune of Stealers Wheel’s goofy “Stuck in the Middle with You”. In 1997, Tarantino announced the arrival of his titular Jackie Brown with Bobby Womack’s groovy, melancholic “Across 110th Street”. He’s even been able to retrofit old Ennio Morricone scores into his intoxicating historical revenge fantasies, specifically 2009’s Inglourious Basterds and 2012’s Django Unchained.

He’s so sharp with music, in fact, that he found a speedy, horn-based version of “Flight of the Bumblebee” for 2003’s Kill Bill Vol. 1. An opera number composed in 1899, the inclusion felt like something new in 2004. It’s not the first time that the song has re-emerged in pop (fun fact: it was the theme song for The Green Hornet’s old radio show), but Tarantino used it in such a dizzying, fresh way — a trick he learned with “Misirlou”.

The song dates back to 1927 as a Greek rebetiko number with Middle Eastern influences, and Dale decided to surf-rock it up in the early ‘60s. That right there exemplifies Tarantino’s entire way of doing things. He’s always been good at re-purposing. He’s basically a gifted digger who can find a golden nugget under loads of dust and resuscitate it to new levels of mass appeal. Remember, this is the same guy who had Samuel L. Jackson turning scripture into an amazing harangue seconds before an execution.

But really, “Misirlou”. How in the hell did this become the film’s calling card? It’s only in the film for roughly a minute, but it comes on fast, hard, and confident. It’s like a bolt of lightning on the beach, a perfect declaration of this movie’s arrival. Or, as Tarantino said it best in 1994, the song “throws down a gauntlet that the movie now has to live up to.” True, but it also cracks open the soundtrack, which is more or less a groundbreaking mixtape. Notice how the film doesn’t have a score; it’s unnecessary. Instead, the soundtrack tweaks the little things, the perfect placements.

Like Lew Dewitt’s “Flower’s on the Wall”, which plays on the radio as Butch Coolidge (Bruce Willis) thinks he’s home-free after double-crossing his own flimsy boxing bet with the big bad Marsellus Wallace (Ving Rhames). Of course, he ain’t free just yet, and the cheery irony is killer. It’s not even one of the more popular tracks, but it’s a total mastery of sound on screen. Bringing up Elvis Presley and Mamie Van Dorn isn’t just a reference, but a character trait and state of mind in Tarantino’s world. In Pulp Fiction, Tarantino found zen between old surf-rock tunes and sexy songs.

However, “Misirlou” lends to the film’s West Coast vibe and Tarantino’s affinity for nostalgia. The Lively Ones’ “Surf Rider” closes the film not unlike the way it opens: with beach blanket guitar sounds, this time slower and reflexive. The Revels’ jaunty “Comanche” is rendered wicked ominous as its scratchy-sounding horns become the soundtrack to a chanced-upon S&M dungeon. Even on the soundtrack album, “Comanche” is preceded by dialogue about bringing out “The Gimp” because the words and music are so entwined.

Chuck Berry’s place in the movie is also the stuff of movie music magic, as his “You Can Never Tell”, a spirally rock song fueling Vincent Vega (John Travolta) and Mia Wallace’s (Uma Thurman) dance competition routine. Rockabilly Barry and Travolta’s two fingers sliding across his eyes are now undeniably linked because of this film. It’s odd to say, and acknowledge, but you remember that scene.

Let’s also not forget the smokier cuts. Al Green’s “Let’s Stay Together” becomes Marsellus Wallace’s unofficial anthem as we listen to it introduce him. The track not only sounds cool, but foreshadows a splitting of ways between Wallace and his palooka boxer Butch. Dusty Springfield’s “Son of a Preacher Man” also takes on theme-like qualities when it arrives with Mia Wallace, alluding to her good-girl-gone-bad tendencies. Later, Urge Overkill’s cover of Neil Diamond’s “Girl, You’ll Be a Woman Soon” feels like a broken heart ballad, and is beyond perfect when Wallace has an unfortunate run-in with a bag of heroin.

The songs themselves are all very good, but the way they pair with every one of Tarantino’s scenes is flawless. They’re placed in ‘50s to ‘70s hangout subcultures, music without any specific context to it.

You see Tarantino accept an Oscar for writing, and it makes sense that a guy this dorky and socially inept has such unique tastes. He’s the product of a pop culturally obsessed generation, constantly looking for something truly worth sharing. He’s like an even dweebier, more spastic son of Scorsese: violent, juicy, and with a less obviously Stones-inclined sound.

Not surprisingly, the soundtrack was a smash hit, going on to sell nearly two million copies by 1996. That’s small potatoes when looking back at that year’s sales for Forrest Gump or The Lion King, but for an indie flick, those numbers were huge. In hindsight, one might argue that Pulp Fiction has more significant cultural capital than either of those hits. That’s probably why “Misirlou” shows up again and again in homage and parody. And partly why Tarantino continues to carve out soundtracks full of music nobody has popularized yet.

Think about it: Could you imagine any other song cracking open Pulp Fiction? Of course you couldn’t.

On a parting note, Tarantino’s made such a name for himself as a soundtrack star, it’s easy to forget he had two music supervisors working with him on this. It’s a postmodern sprawl of music, only made possible by unsung heroes Kathy Nelson (195 music credits on IMDB, including supervising Reservoir Dogs and Scott Pilgrim’s tunes) and Karyn Rachtman (55 credits, including Boogie Nights and Bulworth).

Music supervision is a thankless job: trying to line up songs for idiosyncratic visionaries as you’re low-balling indie bands or trying to cut hard deals with big labels. Sometimes it’s the abuse of interns and contracts, compromising between remixes and masters, or getting let down trying to get that specific Zeppelin song that would tie a movie together. Yet, Nelson and Rachtman really made Tarantino sound good.

At the 2013 Tallgrass Film Festival in Kansas, Rachtman showed up for a special 35mm screening and provided insight into the musical process. FlavorWire chronicled this. Tarantino would say he was writing the movie with songs in mind, giving her illegible handwritten notes with song requests, forcing her to go to his apartment at the time and figure out what he wanted.

Originally, Tarantino wanted “My Sharona” for the “Gimp” scene, but it was already being used in a movie under Rachtman’s supervision (Reality Bites). This would happen. To counter, Rachtman would come up with suggestions and guide Tarantino on set when he couldn’t make up his mind about the music. Apologies if this is coming a little late, but way to go Nelson and Rachtman – you braved Tarantino and iconized Pulp Fiction.