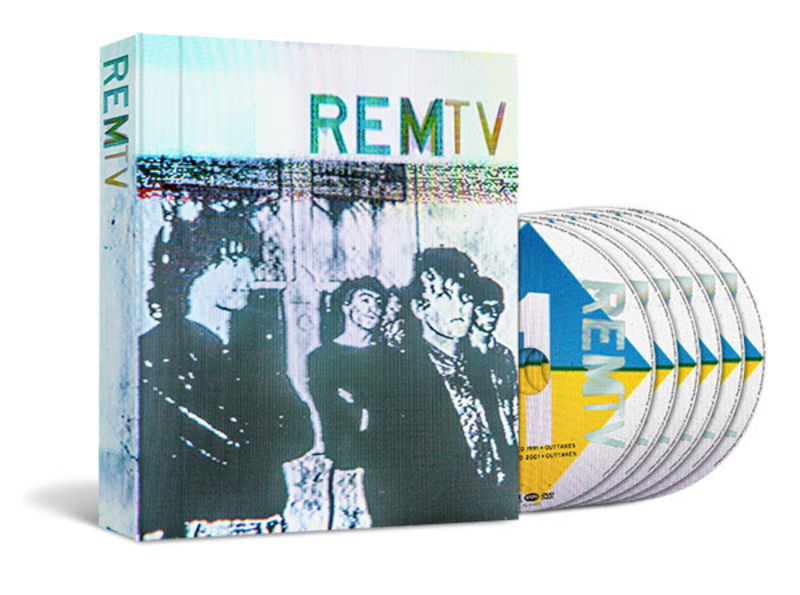 R.E.M. has announced a DVD box set chronicling its 30-year history with MTV. Across six discs, REMTV features live performances, award show highlights, and television appearances, as well as a new documentary about R.E.M. and MTV’s relationship as both rose to prominence in the age of the music video.

As a press release notes, “From the beginning, R.E.M. and MTV have shared a rich history together. In July 1981, the band released its first single, ‘Radio Free Europe’, while a few weeks later the new Music Television network launched and premiered its first music video. From that point forward, thirty years in total, MTV documented everything about R.E.M.: their music, their stories, and ultimately, their decision to disband in 2011.”

In a statement, longtime R.E.M. manager Bertis Downs said, “It occurred to us that there’s all this footage of some of the band’s absolute career highlights sitting in some MTV vaults in London and New York– and thanks to a lot of effort and digging and arranging, this is our chance to share that music with various generations of R.E.M. fans in a pretty unique release. And Alexander Young’s documentary is a fine way to tell the story of R.E.M. through its various twists and turns, as captured in real time by MTV’s cameras– it has some great funny bits too!”

Here’s a breakdown of all six discs:

— Disc one features the band’s two performances for MTV Unplugged (1991 and 2001) along with outtakes — the same ones which were recently released in the audio compilation, Unplugged: The Complete 1991 And 2001 Sessions.

— Disc two features the entirety of the band’s 1998 session for VH1 Storytellers, including two previously unaired tracks in “New Test Leper” and “(Don’t Go Back to) Rockville”. Also included is an assortment of other performances, including the band’s 2007 induction into the Rock and Roll Hall of Fame, their 1983 appearance on Livewire, and their 1984 appearance on The Cutting Edge (the latter of which features the rare cover Brownsville Station’s “Smokin’ in the Boys Room”).

— Discs three through five offer a “trove of rare live performances recorded between 1995 and 2008 in countries around the world. Of the 99 songs that are spread across these three discs, nearly half are unique song titles, offering a deep exploration of the band’s live legacy.” Especially noteworthy is the inclusion of two concerts, Live In Cologne (5/12/01) and R.E.M. Live In Athens, Greece (10/5/08), which together feature a dozen new songs that were cut from the original broadcasts.

— Disc six is a feature-length documentary entitled, R.E.M. By MTV. Utilizing archival footage, director Alexander Young’s documentary “traces R.E.M. and MTV in real time, which makes it feel as exciting and immediate as it did when it was happening.”

REMTV is due out November 24th via Rhino Records. Pre-orders are ongoing. Below, watch the band perform “What’s the Frequency, Kenneth?” from 2001’s Live In Cologne.