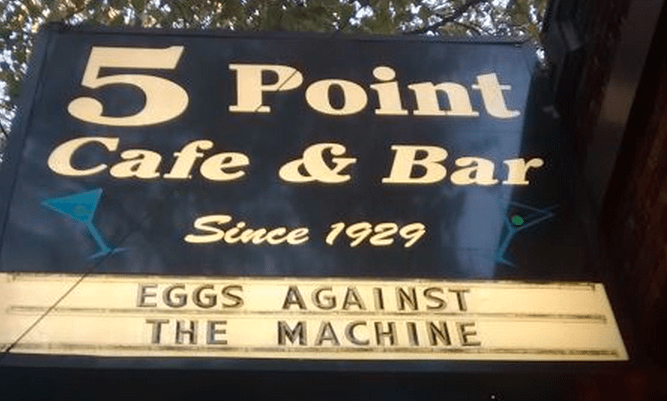 Over the weekend, Tom Morello reunited on-stage with Audioslave bandmate Chris Cornell in Seattle, marking their first time together in seven years. Needless to say, there was plenty of reason to celebrate and thus, Morello and his crew hit local hotspot The 5 Point Cafe on Friday night. However, as Blabbermouth points out, Morello was turned away at the door due to capacity issues.

“Good guy owner” David Meinert responded with a lengthy letter on Facebook, in which he defended his doorman and accused Morello of “acting like a prick.” He added, “Rock stars don’t get special treatment at The 5 Point. We could give less of a shit.” And for the cherry on top, 5 Point changed their marquee to the above image.

For the record, Tom Morello, The 5 Point is totally pro worker. We try to pay more than any other small restaurant, and on top of the higher pay, we offer health insurance, paid sick days, paid time off, retirement and profit share.

Sorry if you had an issue with our staff, but typically our staff is awesome, and when they are not, it’s usually a reflection of the customer. Act like a prick = get treated like a prick.

I have to say, your attacking a small business without knowing anything about it, or addressing your problem with them directly before you go on a public rant, pretty much sucks. Just lost a ton of respect for you, and I’ve been a fan for years, both of your work in RAGE and your work for workers rights since.

P.S.: Rock stars don’t get special treatment at The 5 Point. We couldn’t give less of a shit. Sorry.

And P.S.S.: I’m the owner of The 5 Point and have worked to raise the minimum wage in Seattle and support the same nationally, worked to get paid sick days law in Seattle, and am supporting a city-sponsored retirement plan for employees of small businesses. I hope you do the same for your employees on the road…

P.S.S.S.: [It] turns out [Tom] and his crew didn’t get let in as the place was at capacity and there was a line. No one was being let in. According to our doorman, who I totally trust, Tom and his crew were all totally rude. Quote from the door guys: ‘I knew who he was, we had no room, his whole party was being rude. He wanted a special room in the back. Clearly had no ideas what it is like inside. I’ve told bigger rock stars than him no.'”

Update: Morello has shared his side of the story on Facebook:

I regret that my twitter salvo about the treatment I received at a Seattle restaurant and the subsequent digital tempest in a tea pot may have taken away from the important work of those organizing for a $15min wage and the Seattle show I played on their behalf.

When next in Seattle I would be happy sit down over a beverage–or sooner on the phone–and discuss the matter to conclusion with all concerned. The restaurant, the incident and my bruised feelings don’t matter. What does matter is the hard, tireless work put in by those committed to fighting for a more just world.
If interested however here is the non-140 character blow by blow of the “Encounter At @The5PointCafe”:
Our team of musicians flew to Seattle for a benefit show for 15 Now, the grassroots campaign to raise the minimum wage to $15. I’ve long been a supporter of this particular campaign as well as the national drive for a living wage.

The show itself at the former Off Ramp went great. I was reunited with former @Audioslave band mate @ChrisCornell for the first time in years and together with the raucous crowd it was really a special evening. A good deal of money was raised for the 15Now cause and we wandered into the Seattle late night happy…and hungry.

Two of our hosts from 15Now a band mate of mine, a woman from management, and my brother from Kenya comprised our party. Someone suggested Five Points, a spot I remember fondly from back in the day. I had some reservations because one of our 15Now friends said that while the owner was a good guy and treated staff well, the restaurant itself was on “the wrong side of the minimum wage issue” and had attempted to water down the $15min wage legislation by drawing out the implementation period and adjusting for tips to make it more palatable to small businesses. I am 100% on the side of an undiluted $15Now initiative which is in my view the only “pro worker” position, but hey we were hungry so let’s give it a shot.

The restaurant was packed and spirited and we asked the doorman “party of 6 for dinner?” He said they were at capacity and it would probably be a 10min wait. No problem. Then ten people or so left the restaurant. “Can we come in now? Those people just left.” No. “Why?” I’m not letting anyone in. “Wait a second. Are you at capacity or are you not letting anyone in?” I’m not letting you in. “So you’re no longer at capacity but we can’t come in?” No. “Um ok. How about we order take out and sit at one of these 20 empty tables outside?” No. “Ok what’s really going on here dude? Some of us have traveled a long way. He’s from Kenya! I’m from the 90’s!” I’m not letting you in. “Say, is your manager here? Maybe he’s a Rage Against The Machine fan? He might even raise your pay to $15 an hour!” More people leave the restaurant. It’s clearly under capacity. Then our friends see that inside the restaurant several tables are occupied by friends of ours from 15Now. “Hey look we don’t even need a table. We’ll just join our friends who are already inside?” No. “Really? Why not?” I’m not letting you in. “Can we just go TALK to them and see if they have room for us?” No. It was like a hipster version of a Studio 54 doorman. At that point my band mate made a flavorful declaration and we decamped to the trusty, attitude free, IHOP where we enjoyed a drama free stack of hotcakes.

To be clear: at no point did myself or anyone in our party “demand special treatment”, a “private room” or any other ridiculousness.

I was however pissed at the rudeness of the doorman to my friends and my younger brother–of whom I’m quite protective. I question what underlying motives the doorman may have had. Bad day? Anti-Kenyan? Preferred the Spin Doctors?

Whatever the cause, it is unfortunate that MY actions in response have diverted attention from the great work done by 15Now. “Twitter bitching” is counterproductive as it invites grossly misinformed conjecture not easily dispelled in 140 characters. Lesson learned.

As I’ve said before Seattle is truly an advanced society with its $15 minimum wage, its legal pot, it’s gay marriage, its great music and its Seattle Seahawks.

Next time we’ll call ahead.
TM

Below, watch footage of the Audioslave reunion from over the weekend: