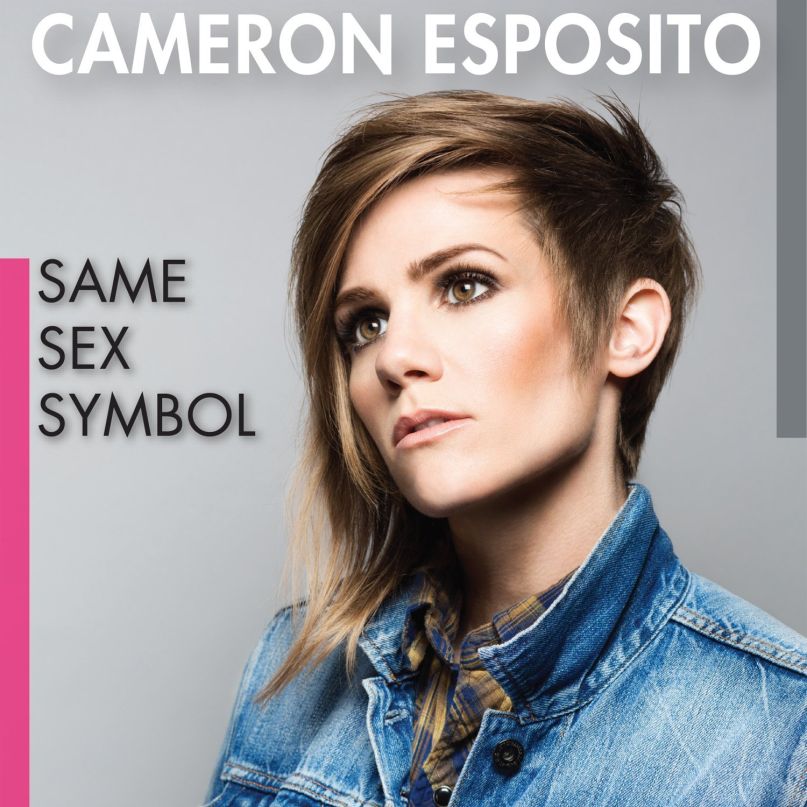 “I know some of you are already taking in my look, so I will answer a couple questions you might have in your mind,” she offers.  “As you can tell from my haircut, I am a ThunderCat. And also a GIANT LESBIAN.” The audience whoops and roars. “Of course I am,” she continues. “I have a side mullet!”

In the past couple of years alone, Esposito’s career has skyrocketed. After moving to Los Angeles from her hometown of Chicago, where she recorded her first comedy album (Grab Them Aghast, 2010), she began killing it with a string of high-profile gigs (Conan, Maron, Chelsea Lately), kick-started by a momentous late-night TV debut on Craig Ferguson in September 2013. At the end of her set, Ferguson invited Esposito to sit onstage between him and guest Jay Leno, echoing the same passing-of-the-torch invitation from Johnny Carson to then little-known comic Ellen DeGeneres on her first Tonight Show appearance in 1986.

Leno called Esposito “the future” of comedy. So far, she is proving him right.

Same Sex Symbol, recorded live over two sold-out shows in Portland, debuted at the top of the iTunes comedy album charts in October. And upon listening to her zippy one-hour set, it’s easy to see why. What has made Esposito popular on the airwaves (guesting on shows like Comedy Bang Bang! and hosting two hilarious podcasts, Wham Bam Pow! and Put Your Hands Together), in text (she writes a column for The A.V. Club about her life as a standup comedian called “Who in the World Is Cameron Esposito?”), and in-person is in many ways antithetical to the standard comic’s crutch of complaining about everything and cursing the world. Yes, Esposito is self-deprecating and qualm-free when it comes to discussing sex, politics, and embarrassing bodily functions. But she also possesses one quality that many of her fellows do not: buoyant optimism.

Esposito is a genuinely happy person, and she isn’t afraid to embrace that joy, both in life and onstage. Her two major audience interactions from Same Sex Symbol, one with a crying woman named Julep (“Julep! Why wouldn’t it be that?”) and the other with a male heckler, are connected by the common theme of joy.

When Julep tells Esposito that she is “having the best day ever,” Esposito responds, “You might think you’re having the best day ever [but] I’m having the best day ever! You are making my fucking day.” And later, when a man interrupts Esposito’s story about meeting Mad Men actress Christina Hendricks and figuring out what to say by shouting “You’re hot!”, a chorus of loud lady booos follows. Esposito’s comeback? “I just want you to know that this is so great for me right now … I have to take a knee at how fucking joyed out I am. Because one poor, sad dude doesn’t realize how many fucking militant lesbians are like, ‘SHUT THE FUCK UP!’ I didn’t even have to say anything!” Esposito then puts the heckler in his place by saying what he suggested is what one should absolutely not do when greeting a talented actress, as Esposito complimented Hendricks’ work, and Hendricks bought her a drink. Bow down.

Although Esposito has a sharp wit, she wields her skill with sanguinity rather than easy rancor, and as a result she is immensely likable. When Esposito says “fuck,” there’s no menace behind it; she’s just accentuating a point in an already well-spun yarn. Her bits are consistently clever — her word choices even more so. She describes getting her period in an airport bathroom as a “Jackson Pollock situation.” She recalls a drunk man “Free Willy-ing” in a doorway before spectacularly falling on his face. She defines her gender as “fighter pilot.” Need I say more?

In short, Esposito is adorable, in the sense that she has the natural talent and charisma to be universally adored. She has room to grow, sure, but just give her some time. This star is hot and rising.