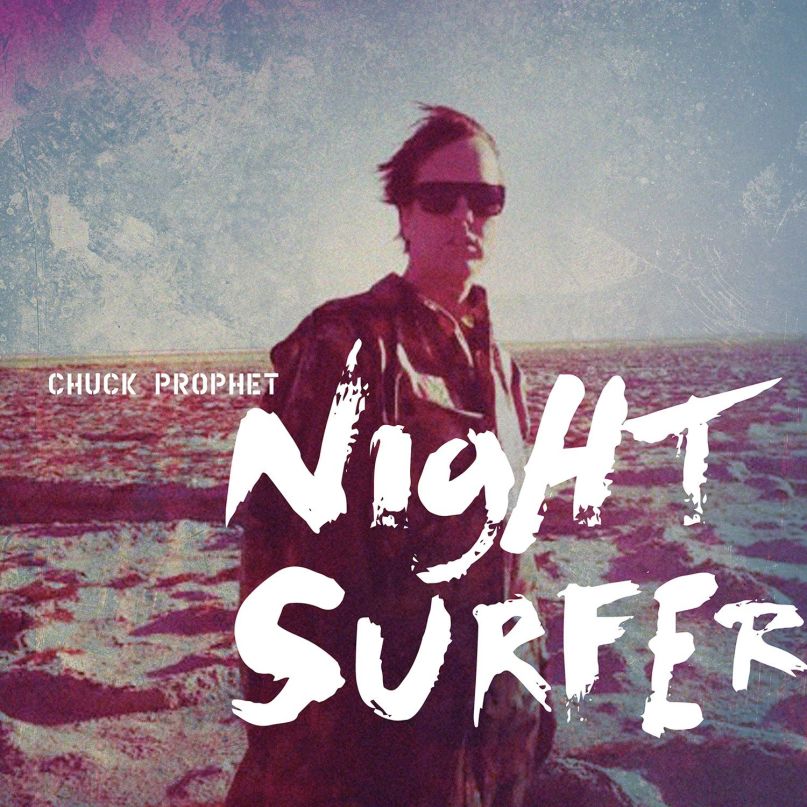 “Life in Startup City, USA is making me anxious … Landlords licking their lips, people getting evicted and laying down in front of buses. I can relate. I feel like I’ve been duct taped back together so many times I don’t know what I’m a part of anymore,” muses Chuck Prophet about his new album, Night Surfer. It’s a record that belongs to that growing trend of middle-aged songwriters commenting upon, however indirectly, a world that seems to grow more restless, unnerving, and bleak by the blink (see: Elvis Costello’s National Ransom, Robyn Hitchcock’s Love from London). But like its contemporaries, Night Surfer doesn’t curl up and wallow or slump into grouchiness, but rather acts as a diversion or pick-me-up from the same heady confusion it addresses. “This record is about a path forward for better AND worse,” says Prophet, “flying blind, looking around, punching your way out of a paper sack.” The result isn’t a blueprint for aging gracefully or even surviving these vexing times as much as it is one man’s makeshift plan for making it through the day with a bit of humor, sanity, and hope left intact.

Prophet’s “path forward,” full of his signature brio, wit, and sass, paves its way upon the same dynamics that have always made life worth struggling for. Standout rocker “They Don’t Know About Me and You”, though set in the distant future, pits boy and girl against the world, an archetype that resonates with many of us on a daily basis, even if only facing a mortgage or future in-laws and not the extinction of the human race. On “Ford Econoline”, a woman, an old touring van, and a Talking Heads song on the radio (not to mention Peter Buck’s cameo twelve-string) are enough to summon a warm feeling and create some mistiness. And on closer “Love Is the Only Thing”, Prophet concludes, as have many songwriters before him, that love, despite its ability to inflict hurt upon us, is the only real gold left in a depreciating world. In many ways, Night Surfer really becomes a record bent on salvaging — or at least recognizing — what’s still worth clinging to in our lives.

Musically, listeners will be familiar with Prophet’s tact for architecting guitar-driven songs that are equal parts grit and jangle pop (e.g., “Countrified Inner City Technological Man”, “Ford Econoline”), but it’s often the subtler adornments or decisions that Night Surfer crests upon: like the shouted, call-and-response backing vocals in the pop chorus of “Tell Me Anything (Turn to Gold)” or the mumbling interlude of “Laughing on the Inside”, with building strings that prod the song to its coiling finish. Other times, cooldowns that might threaten to stymie the record’s momentum avoid tedium through a mix of elements — falsetto and strings (“Guilty as a Saint”) or cooing backing vocals and plucking instrumentation (“Lonely Desolation”) — and actually create breathing space that make the surrounding rockers all the more potent.

It’s rare that Prophet loses his balance on Night Surfer. “Felony Glamour”, despite its energy and interjection of horns, ultimately falls flat with its one-note observational commentary and fades out to no meaningful end. Likewise, the spoke-sung courtroom narrative “Truth Will Out (Ballad of Melissa and Remy)” features a great vocal turn on its chorus and some choice Prophet-isms (“He called himself The Greek, but he only spoke French”), but not a compelling enough story or arrangement to warrant repeat listens. Still, Night Surfer remains that rare record that elucidates how dysfunctional our world has become while somehow leaving us thankful that we get to trudge ahead through the mess. Maybe the album’s takeaway line actually comes from Prophet’s cover of Ezra Furman’s “If I Was a Baby”: “Life is a waiting room for all those who wait/ So much of it’s terrible, but all of it’s great.”

Essential Tracks: “They Don’t Know About Me and You”, “Tell Me Anything (Turn to Gold)”, and “Ford Econoline”