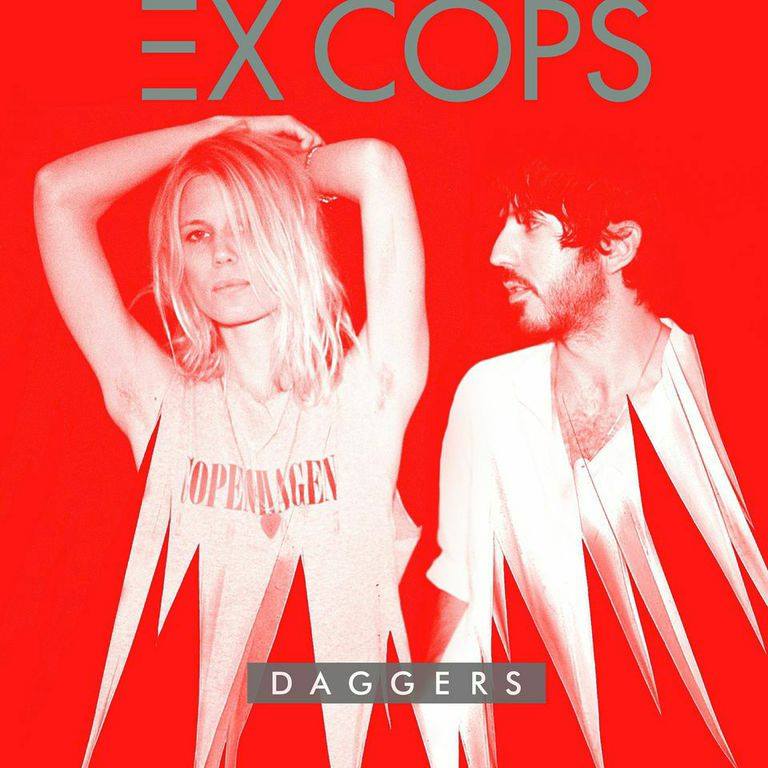 Certainly a math equation exists that could determine what percentage of Taylor Swift exists in the music of Ex Cops and vice versa. At the beginning of 2013, when the not-so Brooklyn duo (the band’s official Twitter account adamantly swears against this lazy delineation) released their spectral debut, True Hallucinations, anyone making a tenuous comparison to the country phenom would have to tread lightly as to not offend either entity’s fanbase. As 2014 goes gently into the good night, such tiptoeing is futile. The same hearts shaking off the world’s liars and dirty cheats also understand how a boy can make even the prettiest girl feel shitty. Even the album’s title, Daggers, points to things like Juliet’s dramatic end and the act of boring a hole with your eyes in the skull of an ex’s replacement arm candy — all within the purview of the sort of jilted romantic who enables Swift to sell out stadiums.

Brian Harding and Amalie Bruun tap into this emotional minefield on “Pretty Shitty”. The song’s jaunty structure pits the duo in a he-said, she-said debate, but Bruun’s lilting, questioning chorus (“How can you be so shitty, to a girl so pretty?”) wins her the round. Elsewhere, she struts her banshee-like wail around with the cocksure smirk of a woman completely liberated from giving a shit about what anyone thinks on the fierce “White Noise” while her numbed phrasing on the slinky “Burnt Out Love” begs for a Zoolander-style walk-off with Lana Del Rey.

Producer Justin Raisen smudges executive producer Billy Corgan’s fingerprints across the album’s 11 tracks, making it hard to discern exactly what influence the Smashing Pumpkins leader wielded. Credit the Charlie XCX/Sky Ferreira wunderkind with finessing the band’s signature gauzy aesthetic while also egging the pair on to create a space where genre is only something that exists in fairy tales. Blondie’s pout comingles with Radiohead’s ennui on “Tragically Alright”, which features a guest appearance by Ariel Pink, as “Modern World” somehow cross-pollinates Pulp’s weirdo grooves with the bubbly spark of a Broadway musical. “Weird with You” jumps a decade and lands squarely on Rex Manning Day: The gang would surely dust the shelves at Empire Records in time to this gem. (Well, everyone besides Warren.)

Not to make a habit of quoting Kris Jenner, but her tweet mourning the loss of designer Oscar de la Renta sums up Daggers nicely: “Fashion is a trend, style lives within a person.” In this context, the album’s blazing hooks are just dressing, no matter how lovely. It’s the electric chemistry between Harding and Bruun that bonds the album.