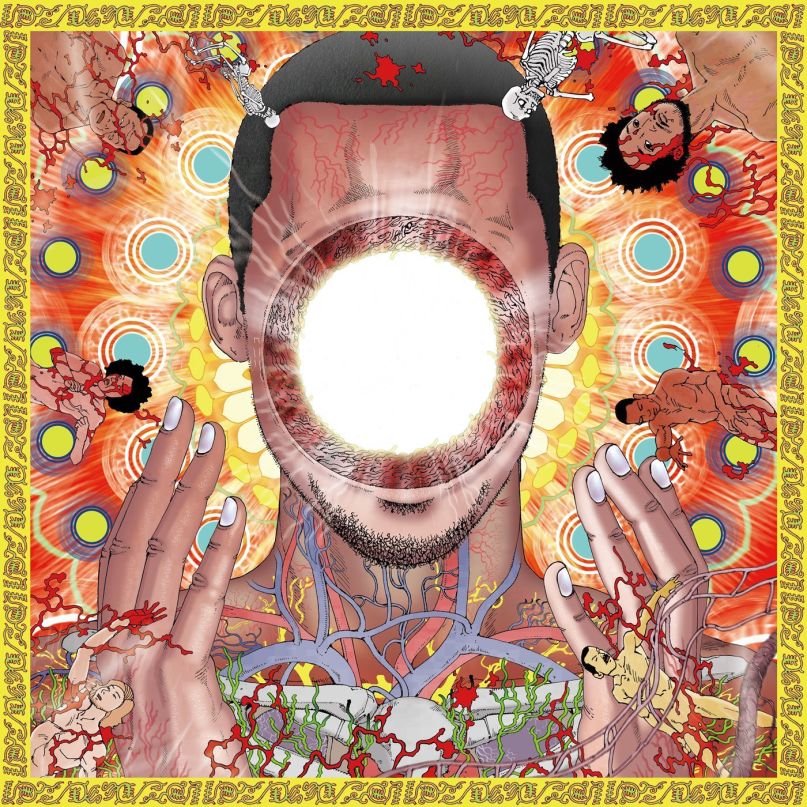 When jazz aficionados first heard Miles Davis’ Bitches Brew, a vocal segment protested that what the trumpeter was doing just wasn’t jazz anymore. The use of the studio as an instrument in and of itself, the integration of elements of rock music — this wasn’t what the purists wanted to hear. Though he’s related by blood to a different jazz legend (his great-aunt and uncle are John and Alice Coltrane), Steven Ellison’s new album as Flying Lotus, You’re Dead!, rips a hole in the timeline between Davis’ 1970 release and the present. He pulls the trumpeter through, shows him that there are still people following in his brain-melting footsteps, and then ultimately blows his mind by leaning in and whispering over the bubbling electronic-jazz-hip-hop stew: “You’re dead!”

The million ideas and motifs crammed into its flowing 38 minutes makes it tempting to call You’re Dead! a head-rush, but that’s underselling it — Ellison tunnels that time-hole straight through the skull, as illustrated on the album’s cover. The key, though, is that like Slaughterhouse-Five‘s Billy Pilgrim, Ellison finds life and death unstuck from their usual places in time. The exclamation mark in the title isn’t a scare tactic, but rather an insistence on death’s unavoidable reality. Ellison doesn’t leave much room for wallowing; the emptier spaces in this set largely fill with glowing ethereality and exploration of that unknowable place beyond life.

To accomplish that transcendence, Flying Lotus implements the tricks of handfuls of different musical languages. Sometimes it’s the ecstatic energy of hard bop, other times the slow sway of astral ambient, and even others the communal hooks of hip-hop. Sections of the album verge on the mystical while others pulse with the visceral, ranging in styles from gamelan to prog. On “Siren Song”, Angel Deradoorian makes an appearance to lend some of the scene-shifting hocketed vocals that opened new harmonic doors when she was a Dirty Projector. Infusing living legend Herbie Hancock’s keyboards into multiple tracks reliably emphasizes the jazz elements that have always presided in Ellison’s brew, and the Kendrick Lamar-featuring “Never Catch Me” is the strongest stand-alone track of the album. The pair find the perfect groove from which K-Dot can expound on the tenuous line between life and death: “I can see the darkness in me and it’s quite amazing/ Life and death is no mystery and I wanna taste it.”

The spooky laughter of Captain Murphy (Ellison’s rapping alter ego) on “The Boys Who Died in Their Sleep” stands out strongly, jarring the sublimity that the rest of the album sustains. It’s telling that Ellison takes Murphy on for an entire solo album, as the character seems conspicuous within the FlyLo world. Perhaps rhyming as himself would’ve served the record better — as is, Murphy’s appearances at times feel one step too cartoony.

That’s not to say that You’re Dead! is otherwise a stern experience. Despite its preoccupation with guts and death, a good deal of the record easily verges on fun. Thundercat’s bass intricacies keep the “Descent into Madness” from getting too Lovecraftian, and the choral insistence that “the days of men are coming to an end” on “Coronus, the Terminator” is paired with enough spaghetti squiggle, noir bass, and even laser gunshots to keep an action movie groove. The stop-start energy and quick shifts can be jarring, and the airier passages occasionally provide too much breathing room when all you want is another burst of Herbie’s keys or Kamasi Washington’s sax. But given how Ellison stretches moments into millennia and jams generations of feelings into a single movement, those concerns get brushed away quickly.

Another important dead person that Ellison addresses on the album is James Yancey, as evidenced by a key line in “Dead Man’s Tetris”: “Hold up, me and Dilla bout to blow some trees,” he says, again reaching through time and space to share a moment with the late J Dilla. While Flying Lotus doesn’t quite have the profile (yet) that Dilla does posthumously, Ellison is clearly working towards some of that producer’s strengths. In a 2012 interview with Westword, he directly expressed his admiration for Dilla: “He didn’t need any voices on top, and he didn’t need any rappers for that feeling. I think he set a standard and an aesthetic that can really come from the heart and can mean something really deep.”

While Ellison’s also exploring his own physical voice, there’s far more palpable emotion within You’re Dead! than what can be conveyed through Captain Murphy — as well as far more than any other Flying Lotus album to date. The album works best as a single, unified listen, the instrumental stretches inspiring just as many shivers as the Kendrick and Snoop Dogg features (if not more). The album doesn’t transcend death so much as it acknowledges the power in recognizing it. The old trope that there can be no life without death, no good without evil, no light without darkness, no past without present or future — that gains new life on You’re Dead!. Ellison dances on and around the dotted lines that supposedly separate the living from those who have passed.