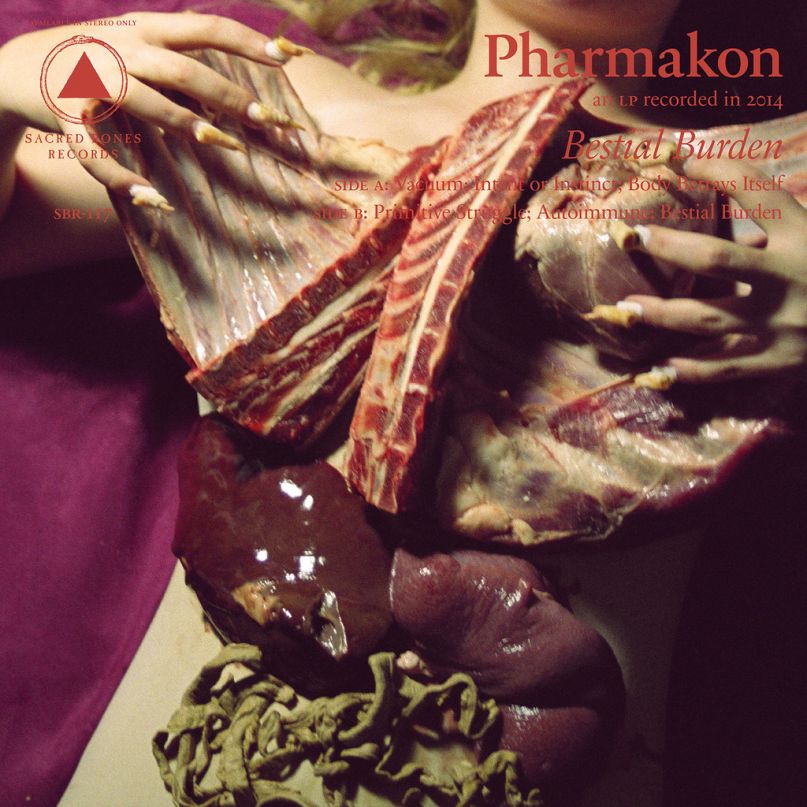 Much of “noise” is given that title because its structures (or lack thereof) defy traditional expectations of music. You’ll never hear a Wolf Eyes “song” on the radio, and in fact, many, whether initiated in the genre or not, would struggle to use the word to define much of what many noise artists produce. But it’s clearer that the best of the genre unlocks something essentially visceral — much of life isn’t lived in digestible moments, but rather in large, chaotic sprawls that must be felt rather than parsed. Songs often exist to structure a moment of reflection, to set reality into a structure to breathe for a moment; noise, on the other hand, often embodies the lack of breath. That’s rarely as true as it is with the latest from Margaret Chardiet’s Pharmakon, Bestial Burden.

Pharmakon’s last album, 2013’s Abandon, used burning noise, howled vocals, and industrial grime to produce a sort of exorcism of control, to reduce the listening experience to the most stripped-down physical experience. Or so it would have seemed. In preparation for a tour in support of that album, Chardiet was suddenly hospitalized due to a large cyst that collapsed one of her organs. That experience produced a twofold revelation that holds the key to the album: First, we are all essentially hunks of meat, and, more importantly, those hunks of meat can fall apart at any moment.

The pressure of that is felt immediately on opener “Vacuum”, which centers on the sound of Chardiet hyperventilating. While body horror comes across quickly in the visual realm, it’s a tricky proposition in music. But the rough-fitting interplay of multiple tracks of Chardiet’s ragged breathing and a slow-building power electronics burn gets the point across just as easily as seeing a David Cronenberg film. There’s one breath, coming in at about 1:15 into the track, that’s particularly wrenching; that fact alone is an astonishing accomplishment, a single breath as devastating as a tightly written couplet.

Chardiet proceeds to dissect the body, picking apart essential elements to display their inner workings, to put their frailty on full display. While other pieces of art are credited for having their creators’ heart on their sleeves in the sense that their emotions are palpable, Bestial Burden carries that weight (few albums in recent memory come close in terms of fear, frustration, and pain) in addition to Chardiet putting the heart on her sleeve just to show you the actual physical workings of its every pump.

On “Primitive Struggle”, a slowly building bass drum rhythm rides the anxiety of Chardiet coughing, hacking, choking, and spitting, again the very effort to inhale oxygen being the primitive struggle that continues to propel each and every day, though we often overlook it. Though that track and “Vacuum” put this struggle on display most acutely, her vocals throughout contain the nearly feral howl of a wounded, desperate animal. Sometimes that means wide-eyed exasperation, and sometimes that means bared-tooth ferocity. Chardiet’s vocal range (or at least her willingness to push it on record) has doubled since her last album: On one end is the downright inhuman guttural growl of “Intent or Instinct”; on the other is the chilling, derisively laughed spoken word delivery on the closing title track. Together, these elements make for one of the most compelling vocal performances of the year.

But, more than just pointing out where our physical bodies fall apart, she’s pointing out the separation of the body and the mind, whatever it means to be human rather than entirely animal. Though it’s difficult at times to pick out certain lines in her roar, there’s a rebellion in her insistence on “Autoimmune” that “I’m a surgeon/ In this vessel.” The chipped tooth, white noise screech, and noxious mid-level pulse that back her (along with a dark, simple drum pattern) bear down like a bone saw, but as a human being, there’s some strength in the fact that she can be a surgeon, that if her body is going to fail, at least she can be the one cutting it up and tinkering with it in the meantime.

The album closes with repetitions of “I don’t belong here” and a mutilated mess of forced laughter, chopped, looped, redoubled, and scorched into a wall of feedback. There’s some triumph in Chardiet’s progression through the album, from a difficulty breathing to a detached understanding that she doesn’t belong in this constantly crumbling existence. Though we are all deteriorating, our existence, thankfully, isn’t relegated exclusively to deterioration, to the operating table — though part of it necessarily is, and Bestial Burden works excellently as a reminder.