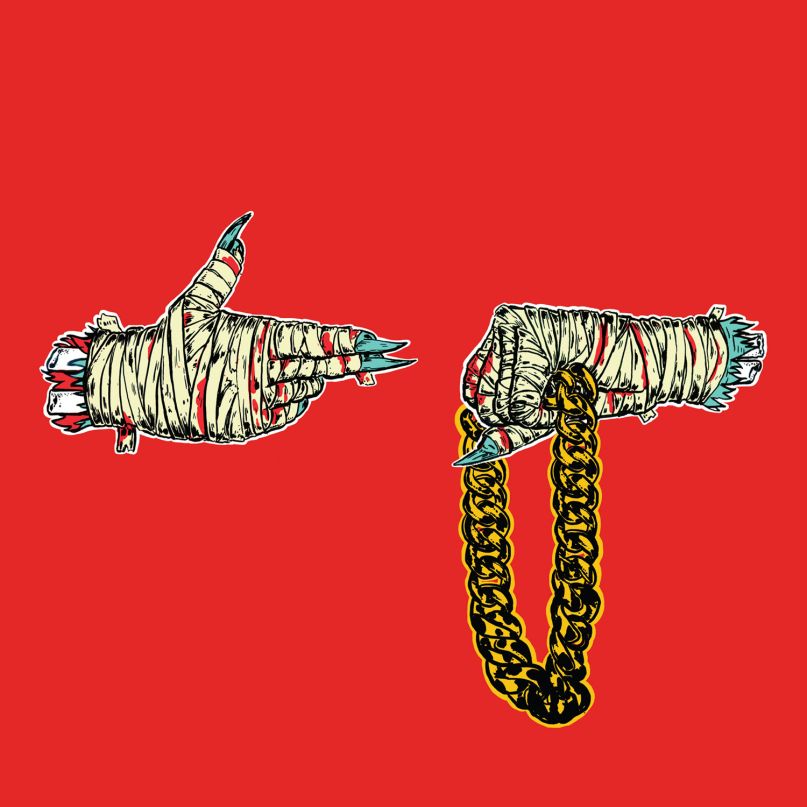 Remember in Terminator 2: Judgment Day when the T-800 was reprogrammed and sent back in time to protect John Connor from the T-1000, the newer, shapeshifting model that was hellbent on killing the future of humanity? Run the Jewels 2 may as well have been called Run the Jewels 2: Judgment Day because it follows a very similar trajectory. After El-P and Killer Mike came at us with their futuristic, dystopian debut as Run the Jewels, they’re back for round two to deliver a grenade launcher to the chest of any and all fuckboys and fakes. Friendly to their dedicated following and as pissed off as humanly possible at the dissenters, Run the Jewels are exactly what the rap game — and the human race — needs.

When they released their first collaborative project last summer, El-P and Killer Mike were both in the midst of career resurgences after a few years of putting out less music and getting less coverage than they deserved. El’s Cancer 4 Cure and Mike’s R.A.P. Music were two of 2012’s best releases, marking a return to form for both rappers. El-P’s production started to reach a consistently amazing level it had approached in the past but never quite achieved. After working closely together on R.A.P. Music, the two formed a friendship that we should all thank a number of deities for, spawning what is quite possibly the strongest working relationship between a rapper and producer since Dr. Dre and Snoop Doggy Dogg.

Run the Jewels, the duo’s debut, dropped in June 2013, immediately standing out as one of the most entertaining and lyrically sharp rap records of the year. Just over a year later, the boys are back, and they’re somehow taking their music even more seriously and having more fun with it at the same time.

Run the Jewels 2 is a more complete project than that first effort, a sign that this friendship is growing in directions that will keep us entertained for years to come. The beats hit harder and go to some fucking weird places; the lyrics are darker and more cynical, but still leave you feeling like you can take on the world with both arms tied behind your back. “You are not you, you are now us,” El says on “Crown”, recognizing that his project has amassed an enormously passionate following of fans that see something of themselves in these two kindred spirits and their delightfully demented rhymes. This is a movement, plain and simple, and it’d be damn near impossible to find two better people to run the show. Kanye and Jay might want to watch the throne, but RTJ are here to take it by force if they have to.

From the moment the album starts, its intentions are clear. “I’m finna bang this bitch the fuck out!” declares Killer Mike. He stays true to his word: This is arguably the strongest album he’s ever been a part of. His lyrical maneuverability is at an all-time high, crossing between laughably explicit sexual rhymes on “Love Again (Akinyele Back)” and deadly serious subject matter on tracks like “Early”, where he puts himself in the shoes of police brutality victims like Eric Garner, and “Angel Duster”, which tackles drugs, mental illness, and human suffering as a philosophical whole. Despite the heavy stuff, Killer Mike is clearly having so much fun — on “All Due Respect”, you can hear the smile creep over his face as he talks about punching a bully in his shit again and again.

Run the Jewels was more of a showcase for El-P’s apocalyptic production, and while this record features some of his eeriest and most outlandish beats to date, RTJ2 is truly Killer Mike’s album. A mainstay of the Atlanta rap scene for a decade and a half, Mike has never achieved such a combination of technical proficiency and tonal accuracy from track to track. That’s not to say El-P doesn’t get his fair share of shine. When I first heard the beat kick in after Killer Mike’s intro on “Jeopardy”, I audibly gasped. It’s absolutely villainous, a slow-burning bass synth that grabs you by the collar and shakes you viciously, like a rabid dog tearing through your favorite childhood stuffed animal. El’s production is so on point that it’s incredible to think he didn’t work on these beats for years until they were perfect.

Each track’s backing music suits the tone of the lyrics uncannily well. “Love Again (Akinyele Back)” is both absurd and beautiful, the beat drunkenly slithering along as Killer Mike and El-P wax poetic about the absolutely filthy things they like to do with women and their appreciation for those women’s reciprocation. Killer Mike’s flow follows the intoxication of the production as he endearingly slurs words like “reminiscing” (“reminiscinin’”) and “husband” (“husbaland”). El’s verse is cleaner than Mike’s, but just barely. Gangsta Boo’s verse is absolutely filthy, as she comes in at the end to reclaim the track for the ladies, dominating with her closing chorus: “I put my clit in his mouth all day” — I mean, my God.

“Lie, Cheat, Steal” is another track where El Producto gets to shine, his verse coming first this time as both the lyrics and the beat bounce between slightly evil and insanely unhinged. “I don’t brag enough,” he asserts, which is totally true. People are quick to call Run the Jewels “braggadocio rap,” and while these two are entirely confident in their abilities and not afraid to speak on the subject, they could produce an entire album composed exclusively of lyrics about how great they are and still fucking kill it. Later on the track, Mike comes in and points a finger at the government, as he’s wont to do, asking, “Who really run that man that say he run this?” and “Who really fund this?”

Run the Jewels had its features, most notably Big Boi, but they didn’t feel entirely necessary. This time around, the features mesh so well with the album’s concept that they’re as crucial as every other element. Gangsta Boo steals her track, a hilarious and important moment on the album, and she’s not alone. Bonus track “Blockbuster Night Part 2” has features from Ratking rapper Wiki (a dude reminiscent of Casper from Harmony Korine’s Kids, so New York it’s surprising he ever leaves the city), and Despot, the ultimate mysterious figure in the rap world. Zack de la Rocha stops by to spit some surprisingly funny lines (“I’m Miles Ahead of you/ You can sip my Bitches Brew”) on “Close Your Eyes (And Count to Fuck)”, and Travis Barker’s drumming drives the beat on “All Due Respect” like the souped-up engine in Mad Max’s Pursuit Special. Beyonce collaborator BOOTS offers some rare soulfulness on “Early”, resulting in one of the more sincere and thought-provoking songs on the record.

An album like RTJ2 is rare. Decades from now, this album may just be revered as one of the best hip-hop records of our era, the total synchronicity of two talented artists reaching the apex of their prime.

Essential Tracks: “Love Again (Akinyele Back)”, “All Due Respect”, and “Early”