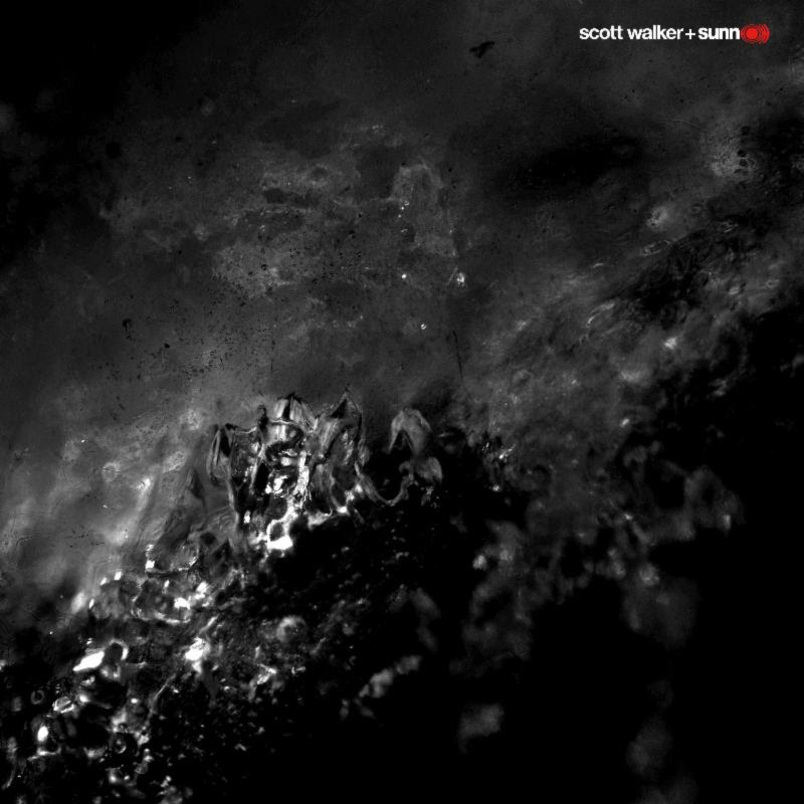 There’s a vast continuum of unexpected collaborations between aging vocalists and contemporary rock bands. The Cardigans and Tom Jones covering Talking Heads (this is not theoretical at all) lands somewhere near the middle, two radio-friendly acts reaching for nostalgia and cheesy accessibility. It’s difficult to place the Lou Reed and Metallica collaboration, as Lulu stands as such a monumentally maligned flop. But now we have the extreme end of the spectrum with Soused, the album produced by the union of pop-gone-bonkers vocalist Scott Walker and doom-pushers Sunn O))).

This pairing would seem to be the most logical of the three, despite the fact that Sunn’s and Walker’s musical stylings would never put them in close proximity. Neither Walker’s early pop days nor the flatulence-and-orchestra experimental wonder of Bish Bosch sound much like the drones of Flight of the Behemoth. Sunn’s collaborations with fellow guitar punishers Earth and Boris scanned immediately, as did those with black metal heavies Ulver and noise destructor Merzbow. The key is that both Sunn and each of their former collaborators rely on volume and abstract language (abstract, at least, to the uninitiated). Through different means, Walker fits into that line.

Stephen O’Malley and Greg Anderson approached Walker in hopes that the vocalist would appear on their 2009 album, Monoliths & Dimensions. He passed due to scheduling conflicts, but dug into the duo’s catalog and grew intrigued. To be sure, the instruments in Walker’s recent experimental albums are plentiful and mixed high, his operatic maximalism on Bish Bosch being the ultimate example. His lyrics, while sung in English, are highly referential, knotted, and can be difficult to parse line by line, but paint haunting expressionist pictures. Sunn 0))), on the other hand, crank the dials impossibly high, their drones like words stretched out so far that you can appreciate the beauty and danger and power of individual letters up close but grasp the message and impact when you step back. The trouble, though, is that the two don’t appear to be pushing equally.

In first discussing this album with another writer, my first words were simply, “Not enough Sunn.” His response? “Not enough Scott!” Throughout most of the album, Sunn 0))) provide a black canvas for Walker to splatter his paints at. The problem is that Sunn are capable of so many different shades of black and many go unused. Walker, rather than dominate aggressively, hangs back proportionately, opting to highlight the strength of the canvas.

While it’s true Walker’s voice is a magnetic presence, it’s not necessary for him to act as a black hole, pulling everything around him into a vacuum. As if to fight that impulse, opener “Brando” adds classic rock guitar bursts and bullwhip cracks, flourishes meant to punctuate the drone. But the whip, the rumbling, and Walker’s voice seem disconnected. These songs would never work as Sunn 0))) songs without Walker, and there’d be too much negative space for these to be Walker tracks without Sunn 0))). But the element in the spotlight, however dimmed or shaded, is invariably Walker.

The 12 minutes of “Herod 2014” come packed with references to bus routes, 16th century French painters, biblical infanticide, and The Sound of Music, a poetic traipse through death and destruction. Much like “Brando”, the musical accompaniment relies on barely tethered punctuations (here a pained saxophone squeal) to hammer home. The track develops a strong droning insistence in its chugging chord progression and Walker’s repetitions of the line “She’s hidden her babies away,” but it lacks either explosion or its threat. They match up strength-for-strength for parts of “Bull”, Walker shouting in Latin over a head-banger’s drone complete with hammered anvil percussion, but that unified moment gives way to minutes of subdued Sunn 0))), the brief catharsis shrugged off.

The disorienting “Fetish” does a better job of sewing together its halves. A thundering drone, likely recorded at max volume, overlaps with Walker and some howling dog tones, just as charred in their overdriven distortion. “Lullaby”, meanwhile, leaves room for Sunn to develop their creepy empty space before building to a high-end screech and circling buzzard guitar, the sort of lullaby only appropriate for being called into another level of sleep while in the midst of a nightmare (earlier in the track, Walker recites Ophelia’s nonsense-speech from Hamlet that’s meant to indicate her insanity).

While there have been plenty of maximalist, dark, heavy records this year, there’s nothing quite like Soused, the product of two entities fitting their strangely shaped jigsaw pieces together. It’s a unique recording, a shocking, exciting collaboration performed in full faith. But it too often fails to be more than the sum of its parts. At times, it even fails to be just the sum, as its two distinct halves each hold themselves back from being their biggest, grandest, and loudest.