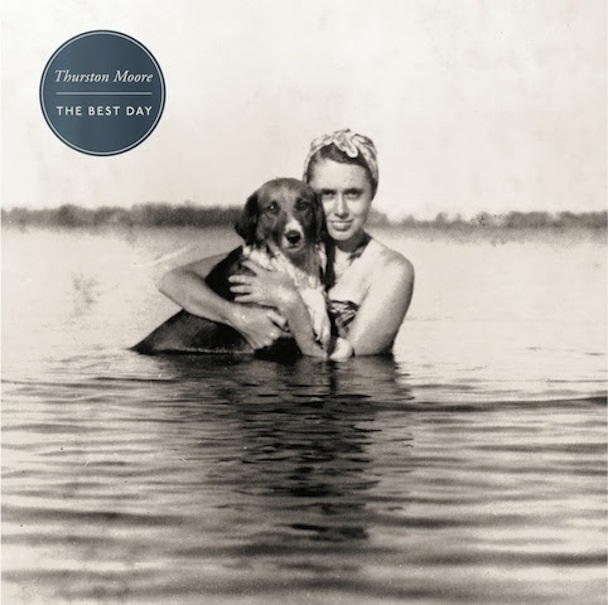 It’s in Thurston Moore’s nature to provoke, antagonize, and push musical boundaries, and the results have rarely been anything short of thrilling over the course of his 30-plus-year career. He’s one of those guys of the rare Waits, Beefheart, and Zappa variety who have succeeded because of his flagrant disregard for pop music’s rigid rules, not in spite of it. Knowing that, it’s hard to get past the title of his latest solo effort without getting longtime Sonic Youth fans’ imaginations running and jumping to some understandable conclusions. The Best Day? Really? Doesn’t that sound a tad optimistic from a guy who’s given us 1,001 different ways to make a guitar scream for its life?

Sure, it’s just an album title, but it makes you think. Just 18 months ago, Moore, fresh off of the announcement of Sonic Youth’s hiatus and his much-publicized split with wife Kim Gordon, summoned all of his guitar guru strength and packed it into Chelsea Light Moving’s ferocious debut. But a record called The Best Day sounds like the work of someone finding calm after the storm. After all, he is 56, and even an ageless champion of rebellious guitar rock like Moore has to ease off the throttle eventually, right? Maybe, but while The Best Day certainly reins in the anger and tension that’s run wild on much of his past work, it’s not nearly as relaxed as its cozy name implies.

There are some docile moments here to be sure. The opening notes of “Speak to the Wild” sound hopeful, touched by the idea that something good can be made of what lies ahead. Even when the track starts to hunker down in the low register, Moore insists that there’s reason to look on the bright side. “Don’t let the dark get you lost,” he speak-sings, and he sounds legitimately eager to heed his own advice. Later on, “Grace Lake” and “Germs Burn” both punch along at a foot-tapping mid-tempo, but there’s a brightness that hovers warmly above them like sunlight trying to puncture the gray.

If you’re worried that Moore’s gone all butterflies and dandelions on us, don’t be. Even if he’s taken on a comparatively subdued approach this time around, he’s still too much of a teenage rebel at heart to totally go soft. “Here’s a man with a lust for life,” he sings on the record’s blues-influenced title track. “He lives for now on the edge of a knife, and you know he doesn’t like to be cut.” Dark, edgy, and more than a little cryptic, that’s a cerebral piece of Sonic Youth gutter poetry if there ever was one. Elsewhere, he blankets the record with cranky layers of his musical hallmarks. There are sprawling tunes that play like an endless test of the listener’s endurance (“Speak to the Wild” and “Forevermore”, the record’s opening two tracks, which clock in just shy of 20 minutes) and acoustic numbers that would have fit nicely on his 2007 solo effort, Trees Outside the Academy (“Tape”), all threaded together by a mischievous art rock undercurrent.

The eight songs that make up The Best Day represent a more measured and balanced record than fans might expect from Moore, but that shouldn’t be taken as a compromise of his irritable guitar rock instincts. He picks his spots carefully rather than instinctively going for the jugular. The songs move between straightforward melodic rockers and Moore’s signature envelope-pushers, sometimes within the same song. He might not be throwing down as hard as he did on landmark noise anthems like Goo, Sister, or even Sonic Youth’s 2009 swan song, The Eternal, but his latest is a nice reminder that his blood can run a few degrees shy of white hot when he wants it to, and that the results can still be rewarding when he prioritizes melody over bold experimentation. The Best Day? Not quite, but Moore’s clearly got a lot left in his creative tank, and that’s something to smile and feel good about.

Essential Tracks: “Speak to the Wild”, “The Best Day”, and “Grace Lake”