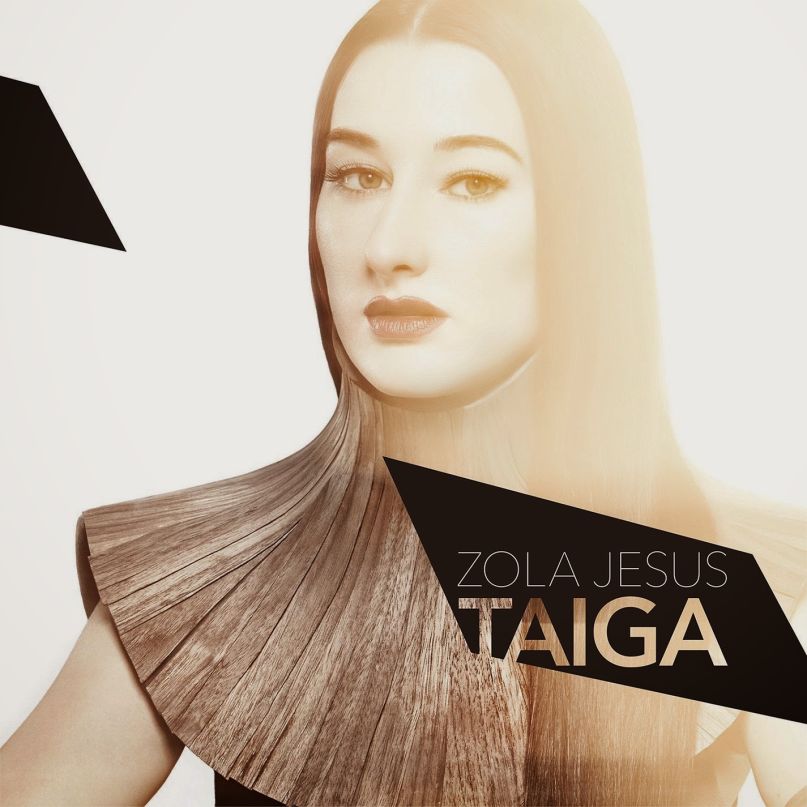 In the first installation of Pitchfork’s Soundplay series, We Were You, the player inhabits an avatar that can easily be imagined as Zola Jesus. Like the song that scores it, M83’s “Intro”, the mini-game sets its huge dramatics across panoramic winter vistas. You play a girl riding a mammoth into the silver horizon while Zola Jesus duets with Anthony Gonzalez. The gameplay might be simple, but the game gets big.

From the breakbeats that kick in halfway through its opening title track, Taiga — the fourth full-length album from Nika Roza Danilova if you don’t count last year’s Versions, a collection of songs arranged for strings with J. G. Thirlwell — embraces big, clean movements. The industrial rasp of her early work still lingered on 2011’s Conatus, but here it’s been brushed aside entirely, its space filled with brass, strings, and Zola Jesus’ idiosyncratic, powerful voice. The record leans steeply on majesty as a motivating ideal. It’s not enough to say that this is a big album. It’s an album preoccupied with the concept of bigness itself, named for the world’s largest biome, the coniferous forest that populates Russia, North America, and the computer game where Zola Jesus made her virtual debut.

When you’ve named your album after the climate of the entire northern hemisphere, the only direction you can go is up. Taiga packs song after song of dramatic sweeps. As a singer, Danilova has never sounded more confident; as a producer, she’s never carried more heft. Aided by co-producer Dean Hurley, Zola Jesus scavenges trance arpeggios, IDM flutters, and orchestral roars, then lets them all stew in the same massive cauldron. The production throughout the record is clean and tight, without a stray scrape of feedback to obscure Danilova’s voice.

While lushness abounds throughout Taiga, danger seems oddly scarce, especially for an artist who began her career belting through dark pop ballads in Freddy Ruppert’s collaborative project Former Ghosts. Songs like “In Earth’s Palm” and “This Is My Last Goodbye” were terrifying in their sparseness and desperation, and they gave Danilova plenty of space to wrench out gutting vocal performances. Former Ghosts’ debut, Fleurs, came out in 2009, when she was just 20 years old, but that feeling of urgency in the face of psychological disaster carried through into Zola Jesus with songs like “Night”, from her 2010 EP Stridulum. Except for “Nail”, which details a codependent partnership in terms of crucifixion, Taiga feels dry of horror, and its songs don’t always structurally necessitate the heights to which their production sends them.

But there are bangers for miles, from the fist-pumping early single “Dangerous Days” to “Go (Blank Sea)”, whose chorus sees Danilova swinging her voice through the better part of an octave. “I go downtown/ Where they don’t know my name,” she sings, as if hounded by her recognizability or just hungry to be unknown in the city’s anonymous mass. The way she pushes the words out, anonymity sounds less like something to hide in and more like something that sets you free.

Danilova traces several unusual paths to freedom throughout Taiga. “Set me free/ Pull the nail out with your teeth,” she sings on “Nail”, the record’s most viscerally unsettling cut. “Ego” sees the songwriter balancing self-regard with hubris, attempting to maintain one while striking clear of the other. On stirring closer “It’s Not Over”, she pronounces the title, half reassurance half threat, against a wash of brass. “It goes away now,” she counterintuitively insists, deliberately enigmatic yet seemingly unburdened of whatever “it” was.

Contradictions like these populate Taiga‘s lyrics, but fewer rifts present themselves in the supporting music. Danilova’s melodies are whole, regular, and often familiar even before you’ve heard them. There are a few stark textural contrasts and compositional surprises, like the break into the coda on “Dust”, but for all its professionalism, Taiga wants for shock. Zola Jesus has a firm grip on the magnificence her songs can accomplish. Without the threat of failure, though, that beauty runs too smooth.