Anthony Fantano Wants to Turn You On

The Needle Drop mastermind explains his success in music criticism. 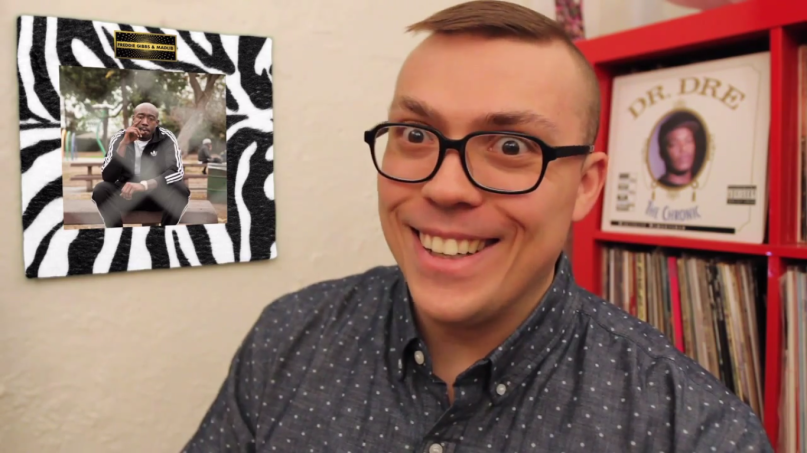 There seems to be an unspoken agreement within the music industry that Anthony Fantano, the founder of the YouTube channel The Needle Drop, is one of the most engaging critics online. His main advantage is that, by appearing on video for anyone and everyone to see, he sidesteps the stereotype that music reviewing is impersonal and boring. He gets excited and disappointed by albums and songs just like the rest of us, but his opinions tend to be clearer than the average listener’s, and that’s due to his medium: video, which he says enables him to better organize his ideas and come across as a genuine dude.

What started as “just a podcast” through Connecticut Public Radio in 2007 has become a channel with over 350,000 subscribers. Fantano had an inkling that he could take the channel seriously when it hit 1,000 subscribers. In 2010, his review of Flying Lotus’ Cosmogramma started popping up in the Featured Videos section of other Flying Lotus clips, which struck him as another “hint” that he should continue to pursue the channel. He eventually partnered with YouTube after reaching around 1,500 subscribers and began working on TND full-time in late 2011.

Over the years, Fantano has had a number of collaborators, most notably his clueless, mustachioed alter ego Cal Chuchesta. However, it’s his striking individuality that has led to the success of the channel. He’s professional yet also hilarious and unafraid to express his toughest opinions. There’s also value in his knack for describing music that might be off-putting on the surface. So, read on for more about the growth of The Needle Drop, Fantano’s approach to reviewing, and his vision for expanding the channel. If you’re in town, be sure to catch him tonight at the Littlefield in Brooklyn, NY. Tickets are available here.

What keeps you and the channel going?

When I got around 1,000 subscribers and I was making videos on a regular basis, I could see some of the same user names in [comments sections] every day, and there was good conversation going on. While I liked [that], at the end of the day my goal is to turn people on to music, to reach people. If I’m not doing that, then I’m kind of failing. While I love music and I love listening to music, I don’t need to talk about it. I can just listen to it by myself and think what I think. But the fact that I feel like I have this ability now to turn people on to some alternative stuff, to some interesting stuff, to some great stuff — that keeps me going.

What are your immediate plans for expanding The Needle Drop?

I have a dude named Juan [Larrazabal] who has done logo art for me, and he also does website design. I’m basically working with him to get [TheNeedleDrop.com] redesigned and more efficient. I really need to get together a good archive for all the reviews I’ve done. I think that’s one of the major shortcomings of the website right now. In the world of music journalism, if you want to call it that, I’m a figure that people know about, but I don’t have a website that competes with a lot of [other outlets].

Apart from view counts and other stats, how do you judge the success of one of your reviews?

What makes me put out a review at the end of the day is that I’m pleased with it, and I guess what makes me pleased with it is that I feel that I have, on some level, adequately described the sound, style, and aesthetic of the record, and a little bit of the context and whether or not I enjoy it, and the specific characteristics of the record that make me enjoy it or not enjoy it. Those are my focuses and goals for every review. I could say a review would be successful if the new Busdriver album sold 100,000 copies just because I reviewed it. That would be a fantasy sign of success for me.

After I make a video as well as I could make it, I can’t pick how it will be received, unfortunately. There are some times when I’d much rather the reception not be, “Oh, Anthony, you’re wrong, I fuckin’ hate you,” or “This isn’t really that good.” But there are some times when it’s like, “Hey man, this is the most amazing thing I’ve ever heard in my life.” That’s really awesome to have that kind of influence on people’s record collections.

What are the pros of reviewing on video?

At the end of the day, video is just a medium. I don’t consider myself to be as much a writer as I am a talker, and some people don’t consider themselves to be talkers. In terms of the pros for me, I feel it’s easier to get my point across, and I think it’s easier to come off more personable because there are some things I will write and I’ll think, “Man, that’s the most asshole thing ever.” But when I say it, I can take a tone with it so it seems less damning.

When I read [music writing], I tend to read things that are super mean-spirited or snarky, and maybe that’s how people view music criticism in general. It’s hard to get past that bias sometimes. I feel like it’s easier to break past some of those stereotypes when you pull back the curtain and realize the person writing the review is just a really nerdy music fan, and that’s it. [With video], I find it’s easier to connect with the viewer on a personal level.

What would make today’s music writing more engaging and useful?

If I had that answer, I probably would’ve just stuck to written reviews. [laughs.] There’s nothing necessarily wrong with written reviews. I feel like written reviews are in the same state that rock music is in right now: It’s tried, it’s true, it’s tested, it’s trusty. What reviews boil down to, no matter what the medium is, is voice and personality. I have a certain tone and a certain voice and a certain personality in my reviews. Websites like Pitchfork and The Quietus have a certain tone and a voice and a personality in their reviews. People go to those sites expecting that voice because they personally identify with it or connect with it in a significant way.

I still wish Carles of Hipster Runoff was still doing what he was doing in 2009 or 2010. Even though [his writing] was ridiculous and satirical, he had a certain sense of humor that people really connected with and thought was smart and witty. During the time Hipster Runoff was at its most successful, Carles had a voice that people could identify and pull out of a crowd: He’d use the two letters “bb” instead of “baby.”

In addition to reviews, you do lists and thinkpiece-style videos. What are your favorite videos to make?

Definitely the reviews, especially reviews of shit that I love, and even negative reviews when there’s a lot to talk about. There’s nothing more unrewarding than doing a middle-of-the-road review, like, “Oh, it’s not so bad, but it’s not so good.” Those reviews are a little daunting to write.

Lists are my least favorite videos to make. I hate making lists. It’s my job to make searching for and finding new music easier for people, and doing a list is convenient. Personally, there are some lists I’d find particularly useful, but they’d have to be super specific, like “The Best East Coast Hip-Hop of the ’90s.” Maybe there’s a hardcore hip-hop anomaly that no one’s heard of and you think is “best.” The purpose of lists is to guide people through some of the more established names and give people the ability to establish a rubric and a background for artists and genres, so that somebody can listen to Wu-Tang or Biggie and listen to an artist like Joey Bada$$ or Action Bronson and know where they’re coming from stylistically.