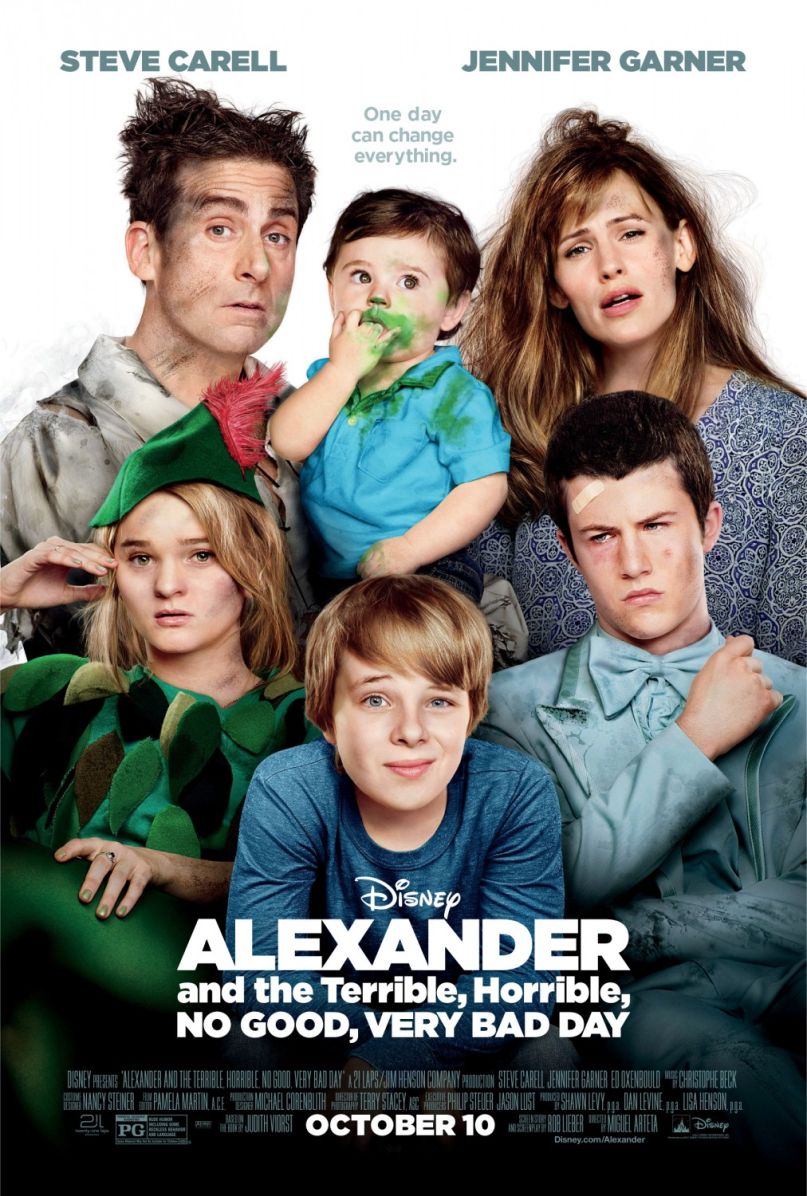 Poor Alexander Cooper. He’s really having that “terrible, horrible, no good, very bad day” you heard about. You think this 12-year-old is over-reacting? Consider: Alexander’s woken up obnoxiously by his older brother. Alexander falls out of bed, spilling milk everywhere. Alexander opens his computer to find out a much more popular kid in his class is having a gigantic birthday party, with Korean tacos (on the same night as Alexander’s birthday, no less!). He finds gum in his hair. He trips over the sprinkler in his yard. He underwhelms the girl of his dreams, Becky, during his daily carpool (she’s reading Lord of the Flies; he has no idea what that is). Another kid in the carpool takes Alexander’s picture and Photoshops it on the bodies of bikini babes, then immediately sends those snapshots out to his entire class. Ouch. But wait, there’s more. Alexander’s an Australia enthusiast: he doesn’t get assigned the continent for a class geography project. Then Alexander accidentally torches Becky’s lab book during science class. Oh, then this poor kid is stuck babysitting the class guinea pig. And then, naturally, his dad, Ben (Steve Carell), is late to pick him up after school.

Sweet merciful crap what a day. And all that happens within the first 10 minutes of Alexander’s movie. Worse yet, it pales in comparison to what happens to the rest of his family.

Yet Alexander, played by the non-groan-inducingly optimistic Ed Oxenbould, marches on. He may just be a kid, preaching about taking the good with the bad and toughing it out, but maybe we could all take whatever kind of chill pill he’s taking. This kind of day could put a grown person in bed for months, but that’s Alexander and the Terrible, Horrible, No Good, Very Bad Day’s earned mantra. No matter how awful things get, and they really do get awful for Alexander and his family, there’s always another day. It can get better. That message, and how well Miguel Arteta sells it, is part of why Alexander is a surprisingly delightful Disney film.

Rather than over-summarize Alexander and the Terrible, Horrible, No Good, Very Bad Day with adjective-laden analysis (as the title seemingly wants), let’s just break it down more simply. This adaptation of Judith Viorst’s much-loved kids novel is cute. It’s an unbelievable day in the life of the seemingly doomed Cooper family, complete with life lessons and the right sense of humor.

Alexander is about a family put in silly scenarios, borderline bad sitcom style. You know from the get-go this is one of those movies where everyone lists the big important thing they have in the near future (job interview, big meeting, prom, play) because it’s a cheap irony when everything goes to pot. Yet, each scenario is efficiently and cleverly staged. For a symphony of awkward moments and bad situations like this, it never feels like the audience is being punished. You feel bad for Alexander, but the movie plays in a lighthearted fashion.

Of course there are sight gags, pop cultural references, and gross-outs like usual, but they’re done with a hint of restraint and even some wit. When’s the last time a 6th grader boasted about sharing “psycho-pharmacologists” like a little Woody Allen joke? Or better yet, Alexander tries to impress a girl with “Boron? BO-RING!” then bombing. Not to espouse the Dreamworks animation business/script model, but the jokes really do seem to fly for all ages. Alexander is funnier than one would expect. In a weird way, it’s full of refreshingly cranky, dorky goofing.

Cheers to everyone involved for putting in just enough effort for what’s likely a payday for cast and crew and 80 minutes of filler for the Disney conglomerate. Steve Carell and Jennifer Garner are tremendously likeable as Alexander’s parents, never condescending to the ridiculous scenarios, always playing the right level of nutty. And Miguel Arteta, a long-respected and busy indie humorist (Buck & Chuck, Cedar Rapids, episodes of New Girl, Enlightened, The Office, Nurse Jackie), plays nice. His sharp, snappy sense of humor translates well in this PG disaster comedy.

Everything ends tidily, unsubtly, with daily affirmation calendar-level life lessons. It’s broad. Yet you don’t often find movies this positive, or funny, without feeling cheated. Alexander’s a good kid in a fun movie, fully aware of that miserable title.