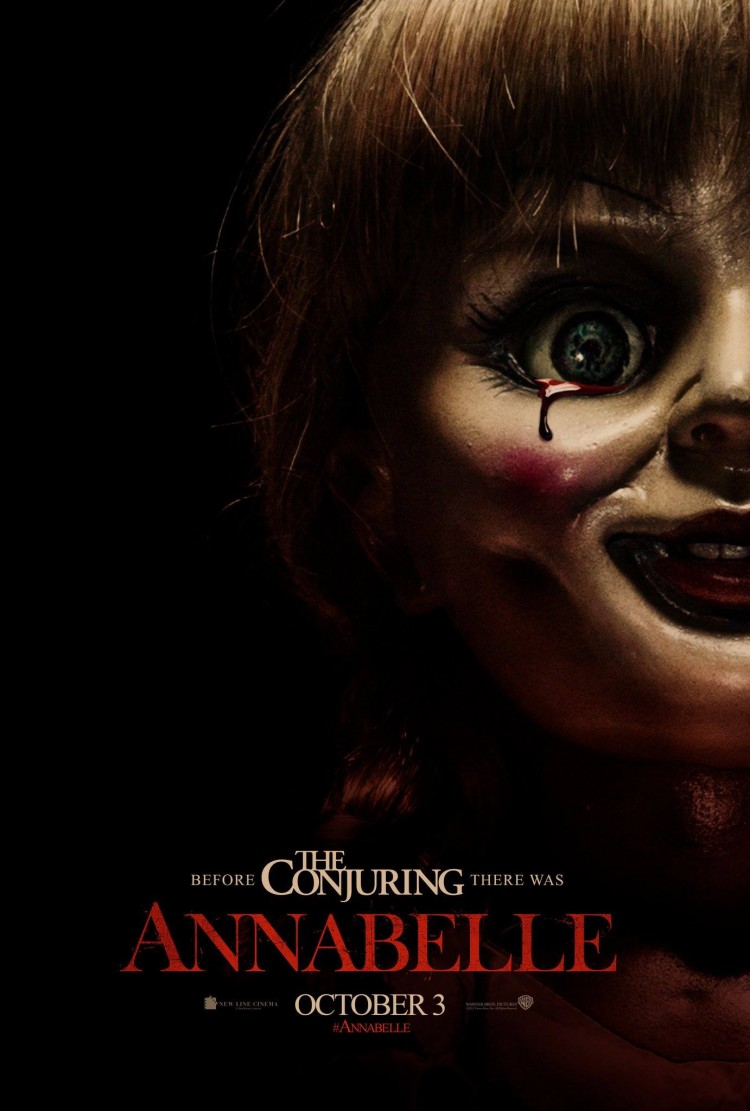 It would appear that the good folks at Warner Bros. took the wrong lesson away from the breakout success of The Conjuring last summer. Rather than acknowledging the merits of assembling a cast of talented actors for a genre film, the ‘70s throwback aesthetic, or James Wan’s knack for writing excruciating tension out of the simplest setups, apparently it was the scary doll that audiences couldn’t get enough of. Accordingly, barely a year after that film’s release, Annabelle protrudes from the mouth of The Conjuring’s xenomorph in an attempt to test just how much mileage a movie can get out of a stationary object. As it turns out, not much.

See, before Annabelle persecuted a couple of nice paranormal investigators and a semi-rural family, she was part of a grisly suburban murder. While the film never fully commits to the murderous cult panic of the era, it uses that as a launching point for this shameless cash-in/origin story. One night, the very pregnant Mia (Annabelle Wallis, and nope, let’s just leave that right there) awakens to what she thinks is a horrific scream from next door. She sends her chiseled, almost Ken doll-esque husband John (Ward Horton) to investigate. John returns covered in blood that isn’t his, and over the next few minutes a gory domestic horrorshow ensues, driving John and Mia from their home and into an apartment, where continuously darker things start happening to them and their adorable infant daughter.

After establishing that a) apparently the Annabelle doll is blood-activated and b) that Mia and John may in fact be the whitest, WASPiest couple in cinema history, Annabelle works through the typical paces of the domestic horror flick. The relocation isn’t enough to keep danger at bay; if anything, it leaves Mia sequestered in an even more hazardous space, where her sewing machine and stove and even the rocking chair in her baby’s room could threaten her very life. And despite their overtures to a local priest (Tony Amendola) and Evelyn, a kindly bookstore owner (Alfre Woodard, too good for this), Mia and John soon find themselves pitted against something terrible, the likes of which they’re wholly unequipped to face off against.

When Annabelle isn’t asking its characters to speak almost exclusively in exposition or idle, leaden small talk, director John R. Leonetti is working overtime to find ways to keep Annabelle menacing, even though almost nothing bad that actually happens in the film is owed to the doll. As in The Conjuring, Annabelle is merely the harbinger for something far more sinister, but here the doll is tasked with carrying the weight of the film far too often. The doll sits on shelves, rocks in a chair even after its momentum should have been stopped, and forces Mia and everyone around her to wonder if she’s losing her mind from post-partum depression (a subtext handled more eloquently in numerous other movies), but because Annabelle hasn’t gone full Chucky yet, there’s a ceiling for how much terror the film can wring from a doll whose only progression from start to finish is the increasingly noticeable layer of grime covering every inch of her. If you’re wondering if anybody in the film notices her increasingly feral smile and general filth, they do not.

For much of its running time, Annabelle is so bereft of ideas for scare tactics that when the doll isn’t involved, it’s hard to differentiate it from any other domestic horror movie that’s ever come out. And aside from one inventive setpiece involving a carriage in a basement and a defective elevator, which makes for a well-executed bit of hallucinatory terror, most of Annabelle is too boilerplate to be scary and too one-note to make for a particularly entertaining evening of viewing. The bankruptcy on hand extends to just how far the film is willing to go to make one of its limp sequences work, the audio mix turning every red herring up to deafening levels. By the time the film allows you to wonder for a solid 45 seconds if an infant has been beaten to death, the whole thing is far too tedious and, frankly, dumb to get worked up about.

Annabelle is a film that was clearly greenlit before the particulars of it were thought out to any extent. It’s a film that prizes narrative convenience above all (a particularly offensive sequence sees a subplot end in violent, disquieting fashion just to get the film to its supposedly necessary resolution), and constitutes little more than a feature-length teaser trailer for the eventual release of The Conjuring 2. By the time Annabelle reaches its end, using literally the exact same final shot as the film that made its titular doll famous, it’s clear that the film’s laborious explanations about the differences between ghosts and demons, its relatively tame violence for an R-rated horror flick, and almost anything else that happens during it amount to precious little. But if you like things that vaguely recall a better thing that you also liked, get ready for a thrill ride.