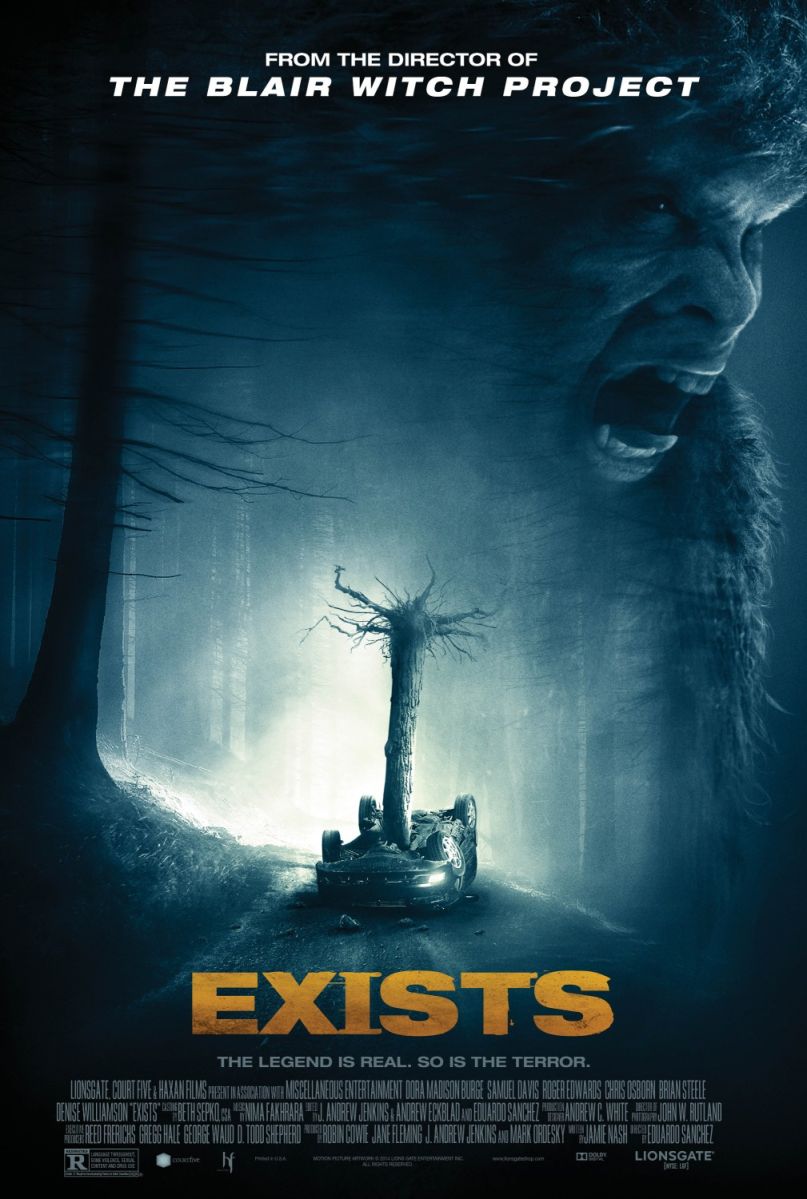 I bought a VHS copy of The Blair Witch Project in high school and subsequently destroyed it with incessant rewinding and pausing. Someone at school told me that if you paused it at just the right moment — a nighttime sequence where our terrified heroes sprint from the tent through the woods — you’d see someone in a mask sitting in a tree. I never found it, but I didn’t really care; I was thrilled by the idea of a film that could sustain such a myth. We saw so little in Blair Witch, and though some might find that frustrating, it supported the idea that there was so much more to see. So, VHS copies in hand, we scoured the film for more and more clues.

I was hoping for a similar aura of suggestion in Exists, the latest film from Eduardo Sanchez, co-director of Blair Witch. And though there are plenty of directorial flourishes to signify it as a descendent of the landmark found footage film, Exists suffers from a lack of restraint. The tired set-up doesn’t help things either: four attractive twentysomethings and one dopey guy in a Daniel Johnston t-shirt are driving to a cabin in the woods. They hit something on the way, and before long they’ve got an angry Sasquatch on their hands. As opposites, brothers Brian (Chris Osborn) and Matt (Samuel Davis) are the only characters to develop a meaningful dynamic, though even their dialogue feels too scripted to resonate in the film’s found footage aesthetic, which is always better off using semi-improvisational banter.

If you want to track the evolution of found footage horror, look no further than the differences between Blair Witch and Exists. The found footage aspect was integral to the plot and mystery of Blair Witch, which took pains to explain when and how its footage was found, not to mention make it look like it actually had been buried in dirt for several years. In Exists, however, it resonates as merely a stylistic choice, with Sanchez going so far as to add an opening credits sequence and an ambient score. The best found footage films understand that structure and presentation should inform the content; Exists makes no case for why it should be found footage and not a traditional horror film.

Still, Sanchez’s approach here is smart. As he did on “A Ride in the Park”, his solid entry to the horror anthology V/H/S 2, the director culls his footage from various GoPro cameras, a clever idea that, since it’s easy to forget you’re wearing one, eliminates the question of why someone would ever film all this carnage. Wisely, musical cues are kept a minimum — a godsend these days –allowing the unnerving glimpses Sanchez inserts into the periphery of many shots to creep up on you, not bludgeon you over the head. Blurriness is also used to great effect, ensuring the film’s monster is never quite decipherable until the final minutes.

Whether or not you laugh during those final moments is entirely up to you. No matter how effectively it’s presented, there will always be people who find the concept of Bigfoot inherently silly, especially with so many bogus reality shows exploiting the myth. Bobcat Goldthwait sidestepped such a response earlier this year by never showing the beast in Willow Creek, his found footage Bigfoot movie (hey, when it rains, it pours). There’s something admirable about Sanchez’s unwavering gaze in Exists, but it leaves little to the imagination. Blair Witch is a film I’ll rewatch for the rest of my life, scouring for secrets. Exists? It ain’t bad, but once was enough.