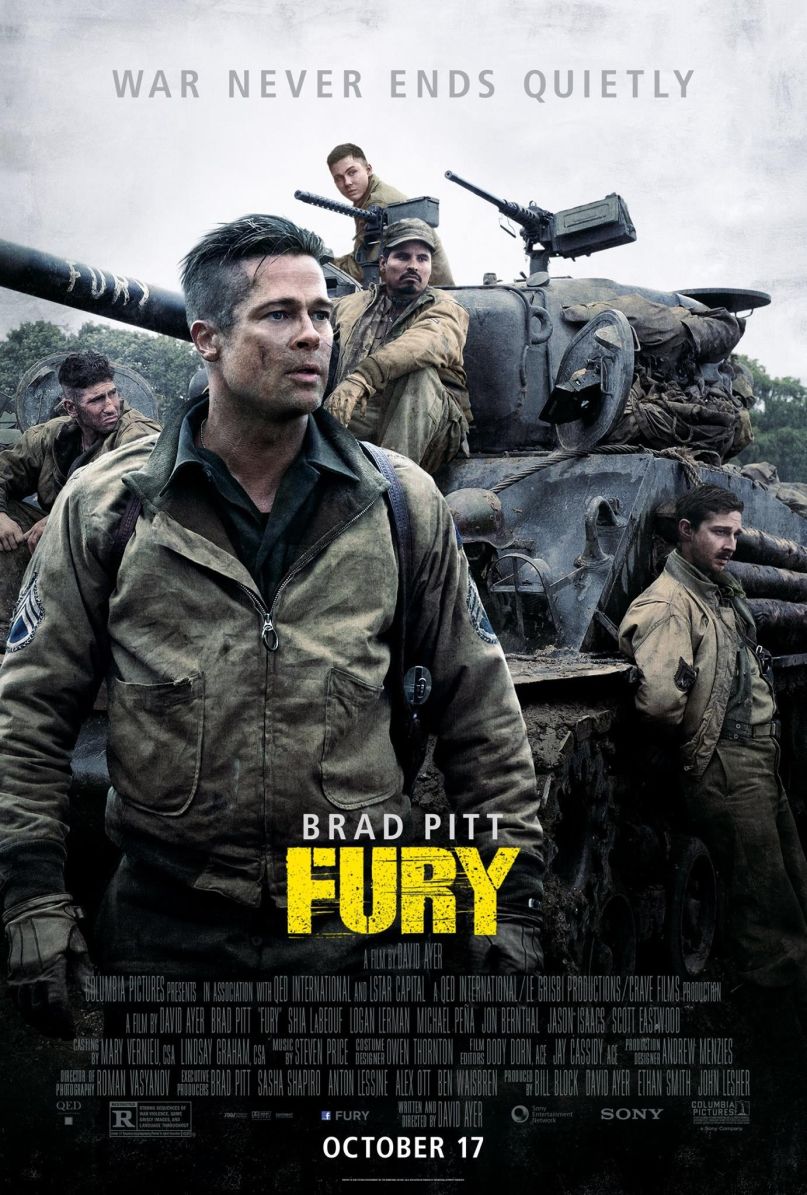 War is vicious, ugly, and pervasive. At least, that’s Fury’s take on the experience. At the literal heart of the violence, there’s a scene that flawlessly illustrates that. Fury isn’t like many war films, but it speaks volumes. Don Collier (Brad Pitt), “Wardaddy” as nicknamed by his tank-mates, is on break. He’s just taken over a German town after a grisly shoot-out, and the Americans have won. Just this town, though. The war ain’t over yet. It’s 1945, and Collier and his crew are on a tour of duty deep within Germany in their tank, “Fury,” killin’ Nazis. But right now, in this small village, it’s time for a little R&R. While Wardaddy’s crew pillages the streets, he takes the green kid, Norman (Logan Lerman), and finds an apartment with two frightened women to shack up with.

It’s a peaceful refrain, as Wardaddy and Norman befriend the women. They share eggs, have coffee, even play a little piano. It’s a break from the horrors of pancaked bodies and flying viscera. The scene’s tenderness is shredded, however, when Wardaddy’s other men show up out of the blue. They kick in the door with their drunken, hostile racism, anxious to grab at the pretty German women.  What could have been a perfectly calm accord devolves into soot-coated shouting about past atrocities. It was inevitable. It’s disturbing and heartbreaking, a reminder of war’s futility and repetitive omnipresence. You can’t escape how awful war is, because it lingers.

This is a core moment, and the most gripping message of Fury, David Ayer’s latest action drama about men in uniform. War may be made of killing and guts and glory, but above all, it persists.

Ayer trades in the badges and street smarts of End of Watch for tanks and country roads in old Deutschland. As an action-heavy war film, Fury is absurdly clichéd, and yet still riveting. Fury’s a desaturated, low-contrast picture with deliberately gritty imagery, a strategic meditation on the tragedies and nasty triumphs of war. Ayer continues to challenge himself within the confines of masculinity, duty, and the action genre at large.

On the whole, Fury works. As an action film, it’s interesting to see the limitations and violence that a tank can bring. Not only that, but from a narrative standpoint, the tank makes for a lifeboat-like scenario, about people locked in and dependent upon one another. It’s like dozens of other tank films, like a gory version of Humphrey Bogart’s Sahara, but that’s not a bad thing. Ayer works well within a well-worn genre. Pitt turns in another hard-ass performance in a film that could jokingly be considered Inglourious Basterds II — after all, the film’s gruesome, shocking, and historically appropriate. Maybe Pitt has a gift for hunting down and spraying Nazis with bullets on camera? Who knows. Regardless, it’s a quietly expressive tough-guy role that he’s become quite good at later in his career. When Pitt’s a mean machine sporting an automatic gun, or stabbing Nazis in the face, he’s really scary. When he’s rapping with the guys about Hitler and God and chocolate and chicks, he shows a comfortingly familiar humanity. Fury moves quickly from place to place, and it’s an honor to have Pitt as a guide.

Admittedly, there are a few authenticity concerns. Would a gunner in a tank shout “whoo!” in victory during this era? Did gunfire really elicit red and green spectral lighting reminiscent of a lightsaber duel (the German shots are an evil green, of course)? And again, the familiarity of the first act teeters on obnoxiousness. Every member of the tank is an archetype: the hick nutjob (Jon Bernthal), the noob (Lerman), the ethnic type (the reliable Michael Peña), the Bible thumper (Shia LaBeouf), and so on.

In the end, you get a sturdy World War II actioner about men in a tank, their mobile home. These men become family, even if they’re too scared to admit it. Ayer has the good sense to not sugarcoat or idealize battle. There’s no shame in cheering for five guys staring down nearly 300 S.S. soldiers that don’t take the time to blink. It’s not necessarily heroic, nor is it defeatist. It’s war.