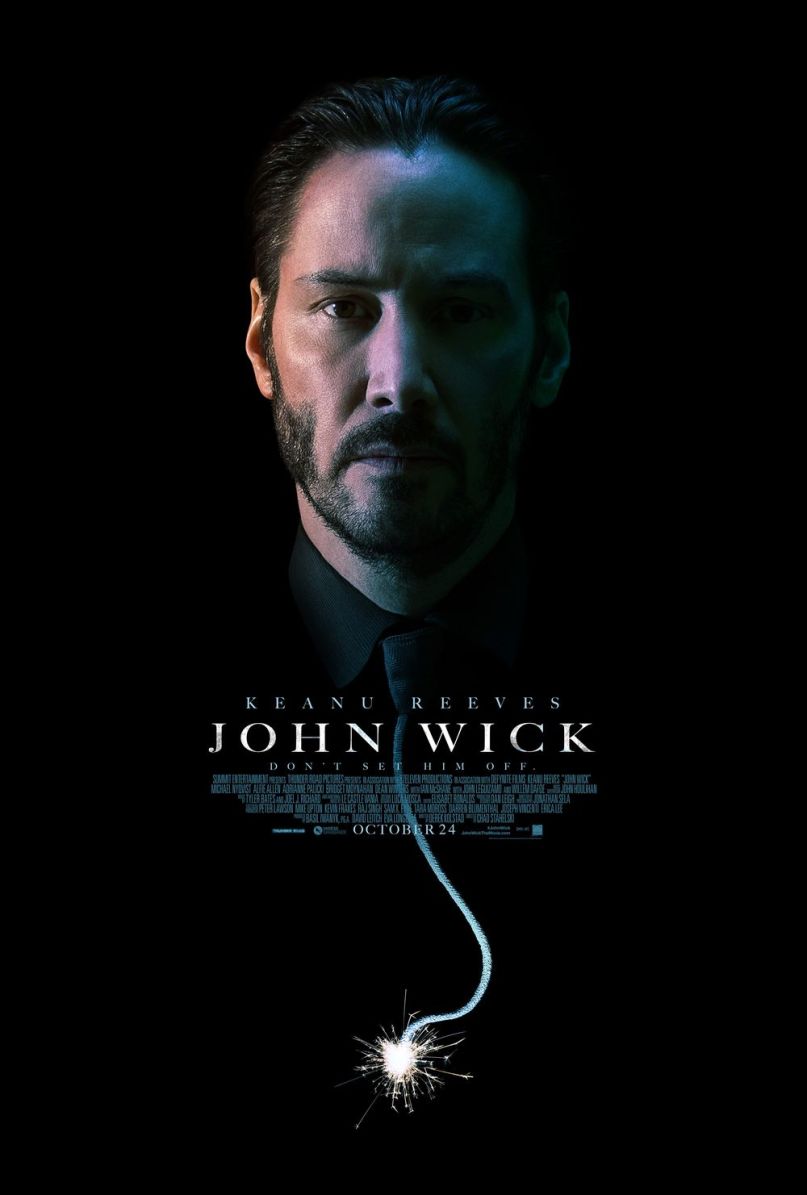 John Wick (Keanu Reeves) is about to take out a generic Russian mobster in a bathhouse. It’s vengeance time, baby, and John is raring and ready to go. He’s been done wrong by a sniveling mobster kid who wanted Wick’s old Mustang. Wick said no. Wick was beaten within an inch of his life, see, and that mob boy decided to crush John’s dog in the process. Needlessly brutal, the incident left John scorned. He’s on the prowl looking for some satisfaction after everything that’s happened to him.

Wick grabs the bathhouse grunt, and, in perfect Russian, declares, “You took my car. You killed my dog.” He then delivers a swift execution.

Now, look, if you think that sounds stupid, you’re right. So does Denzel Washington walking away from a two-minute explosion in The Equalizer, but John Wick has more fun with that sort of thing. John Wick is yet another middle-aged man actioner, but unlike those Neeson and Washington nose-crushers, Wick and its leading man have a delirious sense of levity and absurdity. This is The Equalizer minus 40 minutes, with a surprising sense of humor.

The first directing credit for veteran stunt coordinators David Leitch and Chad Stahelski, Wick goes out of its way to tell other gun-toting films to lighten up a little. The action is direct, as is Reeves, and the film takes place in a knowingly preposterous universe of mannered assassins. John Wick features a hotel for hitmen only. There are rules and penalties for fighting there, not to mention tailors for getting blood out after a skirmish, plus 24-hour doctors that’ll suture and pill a person up. The hotel is just one laughably convenient and cute concept. John Wick’s full of ‘em.

In fact, the plot is way beside the point. Wick’s dog and wife are dead, and his car got stolen. These are as good as any other possible reasons to get riled up. John Wick is a series of clichés as a means to get right to the good stuff. He’s out of retirement. This is his one last job. He takes on an entire crime organization. Wick is viewed as a sort of avenging angel. He’s slow to reveal his murderous skills. Fast cars. Stabbings. Sniper scopes. “Proper action n’ shit,” as P.C. Danny Butterman once said.  It’s the right kind of stupid: self-aware with a smirk. One minute a bad guy is begging with Wick to be cool, pathetically. The next, that dopey villain is sermonizing about Wick as a boogeyman and throwing hard uppercuts. Like the man himself, John Wick does whatever it wants and gets the job done.

Weirdly, this is a nice return to form for unexpected action star Keanu Reeves. He’s never been glib or Teflon in the Bruce Willis way, or shirtless and ripped like your modern superheroes. Keanu’s just had the good taste and luck to star in a few really inventive and unique action films. Point Break showed him losing his surfer boy innocence while trying to fight crime. Speed was all about keeping his cool in the silliest situations. Same with The Matrix, as we believe in Neo’s disbeliefs. With John Wick, Reeves is almost making a joke of the genre by showing how exhausted he might be at his age. The guy’s 50. He looks the same, yet more weathered, without a pretentious bone in his body. If Keanu’s deadpan performance makes it seem like his heart isn’t in it, well, neither is Wick’s. He just wants everyone to know they killed his damn dog and that it’s not cool. Wick will take down anyone in his way. It’s the flimsiest excuse imaginable for a movie like this, and that’s what makes John Wick such a distinct, fun, and funny entry in the genre.

The shootouts and fights lack panache or heavy cutting, which is perfect. Why dress up an action scene with Mountain Dew/Michael Bay extremities? Just get to the goods and make it all visible and understandable. Reeves looks slow but precise as he moves with just enough time to take out any given foe. It’s a little funny and fits the character’s “too old for this shit” vibe. All I can say is I eagerly anticipate any sequels where Wick takes on The Yakuza, a corrupt police department, or whatever headline could make an easy villain. Wick will be there — just give him a minute to catch his breath and reload.