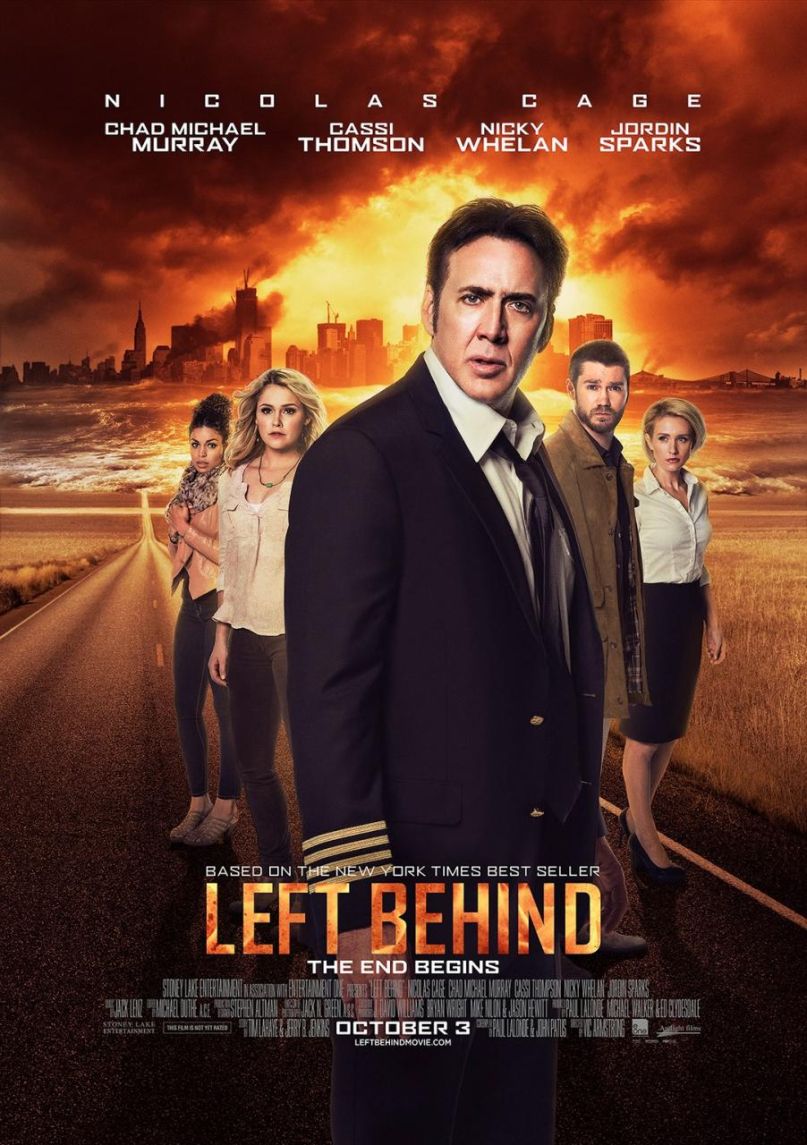 Let me be clear: Not his acting. Not his proselytizing. Not even the “ain’t I a stinker” charm that so endeared us to him on Growing Pains. I found myself missing Kirk Cameron because, as I watched Nicolas Cage squint through this abysmal remake of Left Behind, I longed for somebody, anybody, to give a damn.

And Kirk Cameron gives a damn.

Like it or not, the once-teen heartthrob and now evangelist’s latter-day efforts to save souls via film, debate, and his Way of the Master ministry come from a genuine place. Yes, we actively dislike him for his regressive beliefs on science and sexuality, but we hate him because he thinks he’s enlightening us by preaching those beliefs. Misguided, yes. Cynical, no. He’s on a mission from God, and that shines through in every film he’s starred in. I know it ain’t much, but it’s more than you’ll get from this reboot.

Left Behind, if you’re unaware, is a series of books by biblical scholar Tim LaHaye and novelist Jerry B. Jenkins that dramatized the end times from a Christian dispensationalist perspective. They are basically the Hunger Games of the evangelical sect, a series that weaves post-apocalyptic chaos, political intrigue, and surprising amounts of bloodshed into something larger than life. As a lapsed born-again who’s read every single one, I can say they’re actually sort of fun if you’re able to dodge all the heavy hands. If you’re wondering why I’m babbling about Kirk Cameron, it’s because he starred in the original film adaptation of the series, which was released in 2000 and succeeded by two sequels: Tribulation Force and World at War.

Kirk Cameron does not appear in this latest attempt to spin Left Behind into a major franchise, but Paul Lalonde does. Lalonde, who co-wrote and produced Cameron’s take on the series, is a Christian writer and producer who specializes in bargain-bin end times schlock. With this latest reboot, which he also co-wrote and produced, his hope is to draw a larger, crossover audience by limiting the scope, casting bankable stars, and toning down the preachiness.

“When we did the first Left Behind, it was never an outreach,” Lalonde told TheBlaze last year. “It was made by Christians for Christians.” This is true, and it’s what typically makes both the original 2000 film and the book series inaccessible to secular audiences; its approach to faith is precious, narrow, and ham-fisted. Factor in the fact that Cameron’s Left Behind tries to cram every plot point from the first book into its adaptation, and you’ve got a film that’s as bloated as it is preachy.

The reboot tightens the narrative by focusing solely on the rapture. In doing so, Left Behind only covers the first 50 or so pages of the book, when humans the world over vanish into thin air, leaving nothing but their clothing and jewelry behind. This proves disastrous for pilots like Nicolas Cage’s Ray Steele, who are now sharing airspace with out-of-control aircrafts and fighting for any strip of open runway. Focus shifts between Cage’s airborne adventures and those of his daughter Chloe (Cassi Thomson), who wanders (and wanders) through the riots and looting caused by the mass disappearance. We also spend some time in the first-class section of Steele’s plane, where investigative journalist Buck Williams (Chad Michael Murray) and flight attendant Hattie Durham (Nicky Whelan) try to keep the peace among a motley crew of stereotypes.

And…that’s about it. This is likely to come as a surprise to fans of the books, as there is no political malfeasance, no prayer, and no Nicolae Carpathia, the series antagonist who reveals himself to be the antichrist. Boiled down, this is a movie about people reacting to a rapture-like event and Nicolas Cage trying to land a plane. Now, there’s nothing wrong with that, of course; that kind of simplicity is working wonders for HBO’s The Leftovers right now. But where that show explores how loss fundamentally alters community, Left Behind uses it to generate empty conflict and emptier reconciliations among a bloated cast.

“But!” you’re saying. “Nicolas Cage!” I said that, too. Chuckles simmered in the throats of my fellow moviegoers and me as the opening credits rolled, waiting for that indelible first glimpse of the bug-eyed, increasingly erratic movie star. And said glimpse didn’t disappoint, as it came in a terribly photoshopped snapshot of Cage’s Ray Steele posing with Chloe, his wife Irene (Lea Thompson), and son Raymie (Major Dodd). Unfortunately, that’s about the most comedy you’re going to milk from his leaden performance, which is the definition of “bleary-eyed.” Those looking for full-blown crazy Cage are advised to skip this one and revisit Werner Herzog’s Bad Lieutenant: Port of Call – New Orleans.

All Cage is able to convey with his presence is the fact that faith-based films are now getting sizable budgets, a topic that’s been getting plenty of press in the wake of hits like God’s Not Dead and Heaven Is for Real. Left Behind, for example, is operating on a $16 million budget, though based on the shoddy production values it’s safe to say $15 million of it went to Cage’s salary. Director Vic Armstrong, a legendary stuntman whose last directing credit was a segment on The Adventures of Young Indiana Jones in 2000, never surpasses the stylistic heights of a Lifetime original movie and drowns scene after scene with syrupy strings and porn sax. I never thought I’d write this, but Kirk Cameron’s Left Behind, flawed as it is, looks and sounds better in almost every single way.

I know this because I rewatched it — sober this time — as soon as I came home from the screening. In addition to a better script and, in some cases, better performances (Always actor Brad Johnson mops the floor with Cage in the role of Steele), Cameron’s Left Behind is wholly genuine in its approach to faith.

Lalonde’s belief that the new Left Behind can be considered a form of Christian outreach is sound, as this is a film that’s being marketed to mainstream audiences and not Christian ones. But there’s no grace to the way it incorporates its faith-based elements, no attempts to convey them through empathetic characters or gripping action, like a Narnia film, or hell, even Veggie Tales. Instead, we have watches curiously emblazoned with John 3:16 and Mark 13:32 hilariously inserted as a title card before the end credits. If it weren’t for the film’s source material, Left Behind could very easily be read not as pro-faith, but as a (much more interesting) film about the spiritual corners we desperately retreat to in times of crisis.

“If you look hard enough, you’ll see anything you’re looking for,” Buck says early in the film, and it resonates throughout as characters make thin, illogical connections between the rapture and Christian faith. The film’s most cogent arguments center around doubt, not faith, which I initially found refreshing. By the time Left Behind starts insisting Jesus is involved, however, the clumsy reveals feel as if they’re there for believers who knew they were watching a faith-based film, not the secular Cage-lovers the film is trying to reach. The whole thing feels like a Joel Osteen sermon: lots of fireworks, just enough faith.

I’m not advocating that this film be a form of Christian outreach, necessarily, only that it not try to have its cake and eat it too. Left Behind tries to be a lot of things: an action film, a post-apocalyptic drama, an affirmation of faith, a Nick Cage vehicle, epic, meaningful, entertaining. It fails at all of them, but what it fails most at is giving a damn.

At least Kirk Cameron got that right.