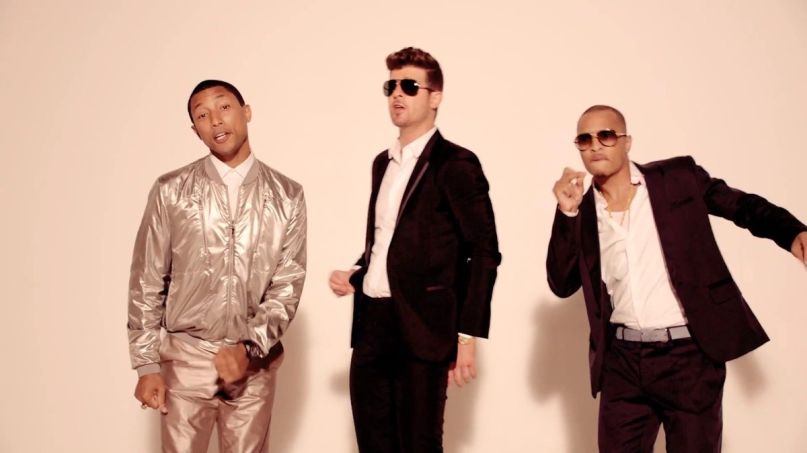 Robin Thicke, Pharrell Williams, and T.I. have been tangled up in a legal battle with Marvin Gaye’s family over allegations that 2013’s “Blurred Lines” plagiarized from Gaye’s 1977 song “Got to Give It Up”. After being repeatedly threatened with a copyright infringement suit, Thicke, Pharrell, and T.I. filed a preemptive lawsuit of their own last summer, defending their names and asking that the claims be thrown out altogether. Now, after a judge has reviewed both sides, Thicke and co.’s requests have been denied, and the trial is officially set to go before a jury next year.

As The Hollywood Reporter notes, US District Judge John Kronstadt examined all the evidence and expert testimony, concluding that the Gaye family had “made a sufficient showing that elements of ‘Blurred Lines’ may be substantially similar to protected, original elements of ‘Got to Give It Up.’ Defendants have identified these with particularity for purposes of analytic dissection.”

The family had also claimed that there were infringements within the sheet music of “Blurred Lines”, which could have opened another legal can of worms regarding extended copyright protection. However, because the Gaye’s lawyers “failed to produce evidence that creates a genuine issue as to whether the copyrights encompass material other than that reflected in the lead sheets deposited with the Copyright Office,” analysis at the trial “won’t examine such things as the congruence of percussive choices or backup vocals.”

In September, Thicke admitted that he had lied about writing “Blurred Lines”, claiming that Pharrell was behind most of the hit single. It’s unclear whether his statement will have an impact on the case.

Below, review both “Blurred Lines” and “Got to Give It Up”.

Previous Story
Listen to the music NASA sent to space to communicate with aliens
Next Story
U2 love Future Islands and Skrillex, but don’t get the “appeal” of Neutral Milk Hotel
Popular
More Stories
[fu-upload-form form_layout="media" title="Submit Your Photo"][input type="hidden" name="ugc" value="1"][/fu-upload-form]