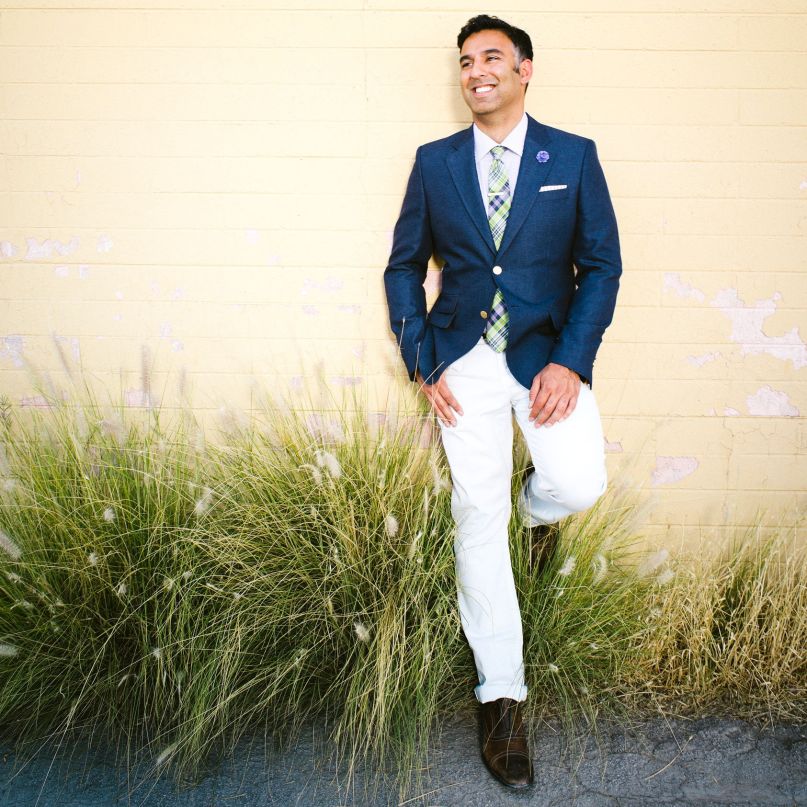 Last year, Life Is Beautiful kicked off its annual takeover of downtown Las Vegas with memorable performances by Kings of Leon, Beck, Passion Pit, and hometown heroes The Killers and Imagine Dragons, but there was a lot more to the festival than the music.

The 60,000 fans who traveled beyond the Las Vegas strip and into the area surrounding Freemont Street were also treated to an extensive selection of gourmet food prepared on-site by a who’s who of locally based celebrity chefs (with all items priced under $10), murals and art installations that made the city streets come alive, and a highly engaging set list of keynote speakers who ranged from entrepreneurs to UFC fighters.

With the music lineup stacked with names like Kanye West, Arctic Monkeys, Foo Fighters, The Roots, Lionel Richie, and many more, we spoke with festival founder Rehan Choudhry to see what else is in store for fans this year.

Last year’s inaugural festival exceeded a lot of fan’s expectations. How are you planning on taking things even further this year?

For anyone that attended last year, we definitely took note of all of the unexpected elements that we put into the festival that people really liked. For example, the entire art program was unveiled last year, and we’re definitely amping that up tremendously. We started putting murals up this week. We have three of them in progress right now and several more getting installed, and it’s just the next step in us turning downtown Las Vegas into what we hope one day will be the largest collection of street art in a walking gallery.

On the learning side, we’ve got 40 speakers this year. We’ve got Pussy Riot taking a break from suing Russia and Putin to come speak at the festival, and it’s their 4th or 5th US appearance, which is pretty incredible, and Ricky Lake talking about smoking pot, which will probably be the most hilarious thing.

On the music side, we increased the stages pretty considerably. We’ve got four big stages this year as opposed to the sprinkling of smaller stages last year.

For the first time in orchestra history, we have the Las Vegas Philharmonic Orchestra collaborating with Cirque du Soleil’s Love doing a tribute to The Beatles. I was at rehearsals last week, and it’s unbelievable to see that all come together.

What are some of the other elements and surprises people won’t find on the schedule?

This year I personally spent a lot of time on what we call “experiential elements.” For example, we’ve got a brand-new stage called “The Reasons Why I Love You,” and the stage is built into the shape of a vintage TV set, and inside it looks like a 1950s living room with two actors inside, and they’re being fed lines from two laptops in front of the booth. The idea is that two people — husband and wife, couples, family, friends, complete strangers — write the reasons why they love the other person or find them beautiful, and the actors read those dramatically to each other through a microphone.

What about the physical layout of the venue? What improvements have you made since last year?

We had a lot of feedback from people who told us that they felt that the food and beverages were disconnected from everything else, so this year we’re blowing up the culinary village and creating four villages, one at each of the big stages. We’re getting rid of all concession-style food and just going with celebrity chefs and major restaurants.

Where the culinary village was last year we’re putting our fourth stage there, and we’re adding a beer garden. People also liked the grassy area we put in last year, so this year we’re putting in three or four areas with more seating; because we’re not in a field, it’s hard to just plop down on concrete and get some rest.

The festival itself is a part of the Las Vegas Downtown Revitalization Project. How is Life Is Beautiful bringing more awareness to the burgeoning music scene in Las Vegas?

Vegas for a long time didn’t get a lot of credibility for being an incubator of great music. When The Killers broke out, they were seen as an exception, but I think the next couple of years are going to be really exciting.

We have seven local breakout bands that are playing the festival this year. We also have Panic! At the Disco; we have Jenny Lewis who grew in Las Vegas. The Killers and Imagine Dragons (who performed last year) are our biggest supporters, and the beauty is that you can probably expect them to come back every year they have a new album or new tour.

Aside from highlighting local talent, what was the thought process when putting together the music lineup this year?

I wanted more of a mix this year, largely because a festival is meant to be as much about you seeing your favorite bands and artists as it is exploring new music and being exposed to different styles and genres. We put a lot of effort into diversity, but we also focused on the individual stories.

As an example, the Foo Fighters haven’t played this market in nine years, and Dave Grohl has said that he wasn’t going to play Las Vegas again. We spent a good amount of time showing him what we’re doing is different than anything else that’s going on in Las Vegas.

After saying “no” to us multiple times, he finally said “yes,” and I just can’t believe a member of Nirvana is going to be in downtown Las Vegas. I mean, this is my home, and Dave Grohl is going to be walking around my neighborhood in two weeks!

The other one is OutKast; this is their second to last show before they retire, and they haven’t played Vegas in 13 years. Lionel Richie is my parents’ favorite artist, and after seeing how well he did at Bonnaroo, we knew we had to include him.

A lot of the middle-tier artists have also never played Vegas before, so we wanted to give locals the opportunity to see these bands for the first time in their own city.

Looking to attend and get lucky? Three-day passes and single day tickets for Life is Beautiful are still available. Click here to purchase today.